Blending: The Art and Science of Sours

When it comes to the wild unpredictability of making sour ales, blending can bring a beer into balance and create a product that exceeds the sum of its parts.

It takes a lot of good tequila to make a great sour beer. At least that’s the case with one of the latest experiments from Andy Parker and the special-projects team at Avery Brewing Co. in Boulder, Colorado.

Parker has mixed many Tequila Sunrises over the past few weeks, he says, playing around with different proportions and ingredients. On a recent afternoon at the brewery, Parker and Cellerman Leigh Audin have split a batch of Belgian-style pale ale—which has been aging in a freshly used tequila barrel with added Brettanomyces and Pediococcus—into several smaller parts. They’ve dosed each portion with various ingredients they’re considering for a blended Tequila Sunrise–inspired sour ale—one portion with orange zest, for example, another with extra salt, one with lime juice, another with pomegranate, and one with cherry puree.

Their appraisal is quick and decisive as they taste through the results. “This one smells like baby vomit,” Audin says, holding up a cloudy snifter of base beer with added pomegranate. “What’s that smell again?”

“It’s probably butyric acid,” Parker says. “It could just be a bad batch of pomegranate.” Either way, they decide that pomegranate likely won’t be a component in the final blend. The lime isn’t quite right either, but could work in another project. Cherry puree, however, adds a subtle flavor and coloring that the brewers hope will give the finished beer a ruby hue similar to grenadine.

These pilot batches and preliminary tasting sessions are geared toward honing in on a flavor profile for the final, scaled-up blend—potentially involving more than 200 barrels of beer and taking place almost two years from now. Parker prefers to over-flavor samples at this point, he says, and then blend back toward the middle with a control beer to get an idea for the proportions of secondary ingredients he’d like to include. He’ll then take that information and create a series of rough blends, taste through those with a sensory panel, and pick and choose components from each. Rinse and repeat as needed until an elusive alchemy of harmonious flavors, balanced acidity, and an intangible element of awesomeness is achieved.

It’s a concept Parker refers to in a presentation he’s given several times—including at the Brewers Association’s SAVOR event in Washington, D.C. —as the Gestalt Theory of blending barrel-aged sour beers. “The idea is that, in the best blends, the result is something greater than the sum of its parts,” he says.

Blending is where the art and the science of making sour beer intersect. Brewers know a lot about the effect that microbes, such as wild yeast and bacteria, will likely have on a beer and how to help guide their development, and there are many other variables that they can control throughout the process, but there’s also a great degree of unpredictability when making barrel-aged sour beers. Blending is an important tool to bring a finished sour beer’s acidity and other components into balance, as well as to develop complexity and a nuanced flavor profile that can’t be achieved with one strand of beer alone.

Where Are You Going?

“It’s fun because we get to nip and tuck the different flavor variables until it’s exactly the way we want it to be,” says Jay Goodwin, cofounder and director of blending and brewing at The Rare Barrel, an all-sour brewery in Berkeley, California.

Goodwin views his cellar projects as a “living laboratory” in which to experiment methodically with the many variables that affect a sour beer, and he’s intimately familiar with the contents of each of the more than 700 oak barrels stacked neatly in racks and aging in the temperate coastal climate. He maintains a detailed spreadsheet with specific gravity and pH readings, fermentation temperatures, additional ingredients, and sensory notes, and he evaluates the progress of each barrel regularly. Not unlike a child who defies expectations, each barrel matures and evolves in its own way. And like a good parent, Goodwin nurtures each barrel’s growth and remains attuned to what each wants to be.

Some batches might be split into a dozen or more barrels and then all be blended back together. Some barrels might be so remarkable that they stand alone as a singular, complete entity—this is the idea behind the “rare” barrel. Many will be dumped. But most of these barrel-aged beers will be used as base materials for blending into other projects.

“When we start a beer, we really don’t know where it’s going to go—the beer tells us where to go,” Goodwin says. “There are always surprises. You have to listen to what these beers are trying to tell you daily. Sometimes it’s like the beer is saying, ‘Forget about whatever you had planned; this is what I am now.’”

A beer might come out of a barrel acidic and lemony, for example, and could blend well into a project where Goodwin is looking to achieve a clean, bright lactic acidity. Or another beer might be really wild and rustic and would work well where Goodwin would like to inject a bit of funk.

“We have a conceptual idea of what we want the blend to be,” Goodwin says. “And as we taste each barrel that could potentially go into a blend, we ask ourselves, ‘Is this is good a fit? Is it free from off flavors? Is this the acidity that we want? Is this the yeast character that we want?’”

From Berliner Weisse to Gose and points in between, quick souring is rapidly becoming the time-constrained brewer’s choice for building pleasant tartness on a schedule. In CBB’s online course, Quick_Souring Methods, Funkwerks cofounder Gordon Schuck explains how to use Lactobacillus bacteria, experiment with sour mashing, test acidity levels, and more. Sign up today!

Jason Perkins, brewmaster at Allagash Brewing Co. in Portland, Maine, says that when planning a blended sour, it’s also important to keep in mind practical considerations—such as the size of the tank you’re blending into and how many barrels it will hold. He also emphasizes the importance of calculating where the blend will end up in terms of pH and acidity levels, residual sugar, and terminal density.

“If I’m working with ten barrels and five of them use Brettanomyces and five don’t, for example, I need to think about that for a little bit,” he says, “because the Brettanomyces will most likely attenuate more residual sugar than the non-Brett barrels. If I don’t factor that into the blend, then I’m going to potentially have problems with refermentation in the bottle or the keg with over-carbonation or worse.” 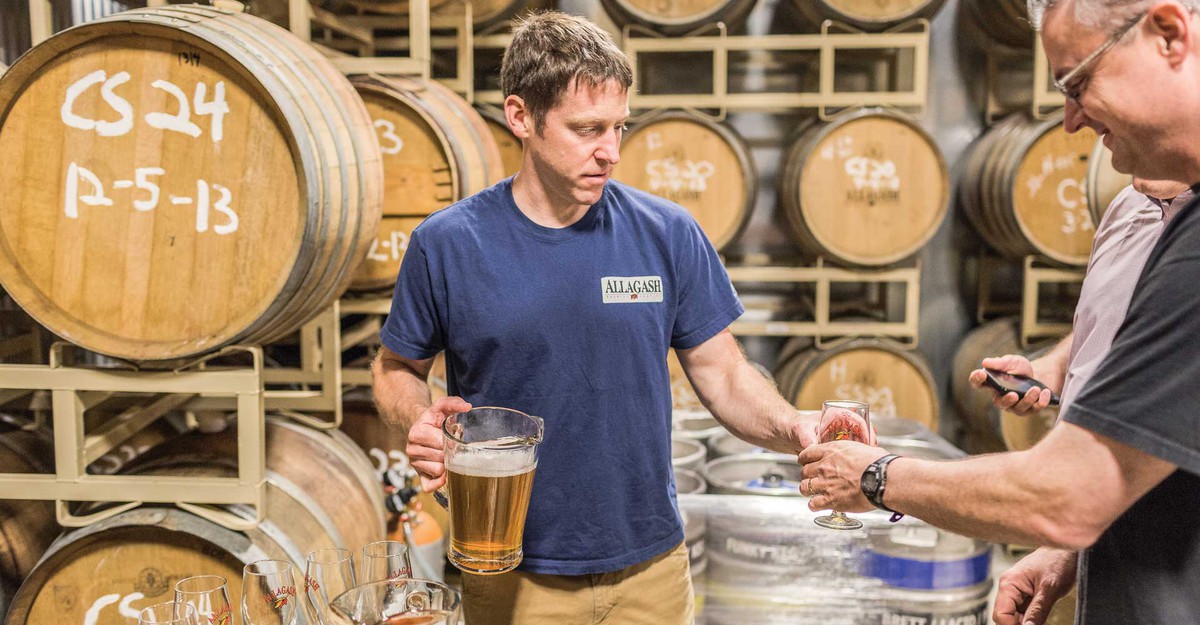 With those calculations in mind, Perkins and his team select the barrels they’d like to use and create a series of rough, bench-top blends using pipettes and graduated 500-ml flasks. They’ll bring in a sensory panel of experienced brewers to evaluate the blends and will often go through several rounds before landing on the ingredients and proportions for a finished project.

“While it’s very important to be aware of the practical and scientific aspects of blending, in the end it’s always a sensory decision,” Perkins says. “What drives the final blend is the flavors working with each other in harmony and the overall flavors we prefer.”

Allagash is one of the few American breweries that have installed a coolship to make spontaneously fermented lambic-style beers. The brewery also makes mixed-fermentation sours (where a prescribed quantity of microbes is added to a batch of traditionally fermented beer) as well as sours made by inoculating a new batch of wort with portions of an older sour beer. Perkins also likes to include fresh-fruit additions, which inadvertently add wild yeast and lactic-acid-producing bacteria from the fruit skins.

“It’s a little more challenging and there are more factors to incorporate, but the unique flavors you can get from some of these wild microbes and from barrels are some you can’t get from anything else,” Perkins says of designing new sour beers. “We control everything that we can control, and anything we can’t control, we compensate for with blending.”