Rather than making the surroundings conform to the brewery, the team behind Lake Anne Brew House in Reston, Virginia, went back to a planned community’s roots and offer a glimpse of how things were and in turn give visitors a period experience.

When it was founded in 1964 as a self-contained planned community, the Lake Anne area of Reston, Virginia, had a lot to offer, but not a brewery. That wouldn’t happen until 2016 when Melissa and Jason Romano opened the Lake Anne Brew House. By that time, a lot had changed in the community. There were still a lot of the architectural hallmarks that made this community so admired, but it had evolved from its original intent.

So the couple, who also live in town, decided that in opening their brewery, they would stick to the mid-century modern design that was popular in the 1960s. By offering something that hearkens to a specific era while tying it all together with beers that are popular today, Lake Anne Brew House is part of a niche that seeks to stand out from what can often be a cookie-cutter approach to taprooms.

Melissa Romano is an architect and a native of Reston. She says it was both gratifying and odd studying her hometown while getting her degree but that it forged a better relationship with the tourists who come to visit the community to revel in the Brutalist architecture and design. (Brutalism, which flourished from about 1950 to 1975, advocated utilitarian designs in which function trumped form with raw construction materials and nitty-gritty functions left exposed.)

The space that the brewery now occupies was originally intended to be residential space, but shortly before the building opened, Romano says, the designers changed the purpose to retail but kept all the accoutrements of residential life, including a bathroom complete with a tub and a shower.

By the time the Romanos took over the space, it had been a multitude of restaurants and other businesses that kept the trappings of domestic life, all while adding their own design flairs.

“You can see how this would have been an apartment,” Romano says, “from the kitchen to the little stairs and the back bathroom. The good thing is that we have a nice floor drain already built in.”

In thinking about what the taproom and small brewery would be, Romano wanted to go back to the beginning.

“The character of the architecture around us demanded attention,” Romano says. “It was never an option for me to do anything but a mid-century modern vibe in the taproom.” That meant getting back to the Brutalist aesthetic of the building: the concrete.

“Before we moved in back in 2015, this was a Thai restaurant, a Moroccan restaurant, something else, and then a deli that I remember going to as a kid,” she says. “Every restaurant added another layer of flooring, and I knew that somewhere under it all was going to be a concrete floor. So we scraped up all the past and made discoveries from tiles to laminate and more. We got rid of it all and got it back to the concrete that matches the outside. The place is back to its roots, and that gives me a great sense of pride.”

As an architect, Romano says she always wants to understand the history of a place and to find a way to pay homage to that. Thinking about history or a period is one way for breweries to stand out a bit more.

“Trends come and go, and right now so many people have the modern industrial look in their taprooms: black iron, wooden taps. You see it place after place. It’s monotonous, and I wonder how folks will feel about it after 2 years.” 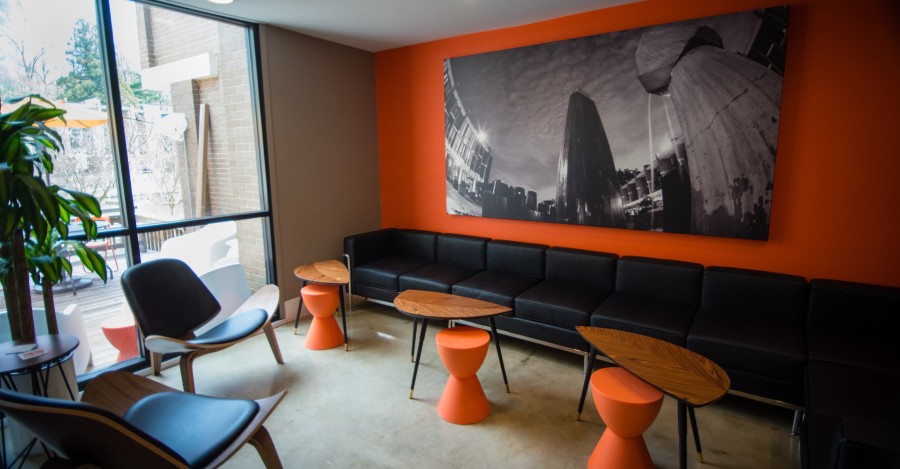 Design on a Budget

To re-create the feel of the period, Romano needed the right design elements to pull off the look. Walking into the taproom for the first—or even tenth—time, visitors feel a bit of a time warp.

“It’s iconic mid-century modern in the taproom,” Romano says, “with period-specific chairs and a couch, all done in the same orange color as our logo. We have period-specific white-lacquered tulip tables, a lot of walnut, and Nelson Pendant lights.” And it’s hard not to imagine that they spent on design what most breweries spend on fermentors, but Romano says it all came in on budget. Most items are replicas or were found at auction. The construction build-out was done by bootstraps with Romano and friends doing most of the work, except for the drywall.

“It might not look like it, but I’m super frugal. This was an Ikea budget,” she says. But the overall look—along with the beer—lends itself to a fuller experience for customers. She firmly believes that if people are comfortable or excited about the space they are in, it leads to a more fulfilling experience.

The brewery has also spawned another, albeit unintentional, business: a bakery that focuses on pretzels. When Romano was working on the build-out for the brewery, she one day discovered a small parcel filled with freshly baked pretzels sitting outside the front door. The baker was Eric Lundberg, and the two quickly joined forces to serve pretzels in the brewery’s taproom, a good in-house food option because, given the taproom’s location on a promenade, the food-truck option isn’t viable. (It’ worth noting that Lake Anne Brew House does work with nearby restaurants that will deliver food to customers.)

Rather than just servicing the brewery together, Lundberg and Romano opened Nordic Knot, a pretzel-themed standalone bakery that is just a few doors down from the brewery in a space that would have otherwise been a condo.

Now the bakery has begun working with other breweries as well as part of a “Malt & Salt” program where the bakery makes the twisted treats to match specific grain bills in a brewery’s beer. 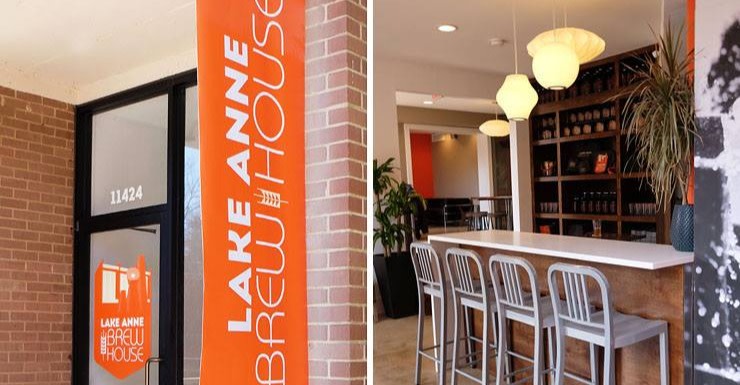 The Desire to Stay Small

The question the Romanos are asked most often is when they will move to a bigger spot, build a bigger brewery, or start distributing their beer. It’s a question Romano got before a room full of reporters earlier this year at a Brewers Association dinner in Manhattan.

Romano is ready with an answer. Sure, some folks might look at their 1,000-square-foot space and 2-barrel brewery and say get bigger, but why is that necessary?

“We didn’t come into this with the idea of being a big distribution brewer. We wanted to be a community taproom. It’s a struggle these days to be a small brewery with a 10–15 barrel system. Then there’s distribution, and it’s just not something we’re interested in. People seek us out, and we’re here for our neighbors and our community. That’s our primary focus.”

She notes that it’s not often that Michelin-starred restaurants are asked when they are going to franchise or get bigger or change what they are doing, yet that seems to be the default question for breweries.

“That doesn’t make any sense to me. Part of what makes those restaurants amazing is the food and the experience and that you need to go to the restaurant to have the experience. We want people to come to our taproom and feel at one with the architecture, drink the beer, experience the camaraderie. It’s different if they get our beer at a store and take it home to drink alone in front of the TV.

“And if we do find another location that is as much of a gem as this one, we’ll put in another taproom, a different one, and we’ll brew for that community. It should be a taproom that suits that place, made for that place. There should be something like that in every community.”

Sarah Howat examines one Southern California brewery’s closing and what it could mean for the larger craft-beer industry.