With a coffee shop, brewery, taproom, and kitchen all within a 10,000-square-foot space in the heart of Cambridge, Massachusetts, Lamplighter Brewing is filling a need for the local community, no matter the time of day.

Founders Cayla Marvil and AC Jones (pictured above) took a gamble on the expensive urban location but remain committed to the neighborhood.

There are usually a lot of things that change from when a business is first conceived to when it first opens its doors. Brewers are not immune to this, and most will tell you that what they finally opened with was far from the original hopes. For the founders of Lamplighter Brewing Co. in Cambridge, Massachusetts, this is certainly true—all except for one thing: the location.

From the start, Founders Cayla Marvil and AC Jones knew that they wanted their brewery to be located in Cambridge. At the time, they were living in the city, just west of Boston. They had started to put down roots and saw a need for a second brewery in the crowded metropolitan area. (Cambridge Brewing Co. had been in town for more than 2 decades, and a John Harvard’s Alehouse had stopped brewing but was still serving beer.)

“Even our real estate broker, whom we still use, wondered, ‘Why not Everett, or Medford, or someplace else,’ where the rents are cheaper and we could actually get some space,” says Marvil. “But we knew we wanted to be here. We wanted to be part of this community.” 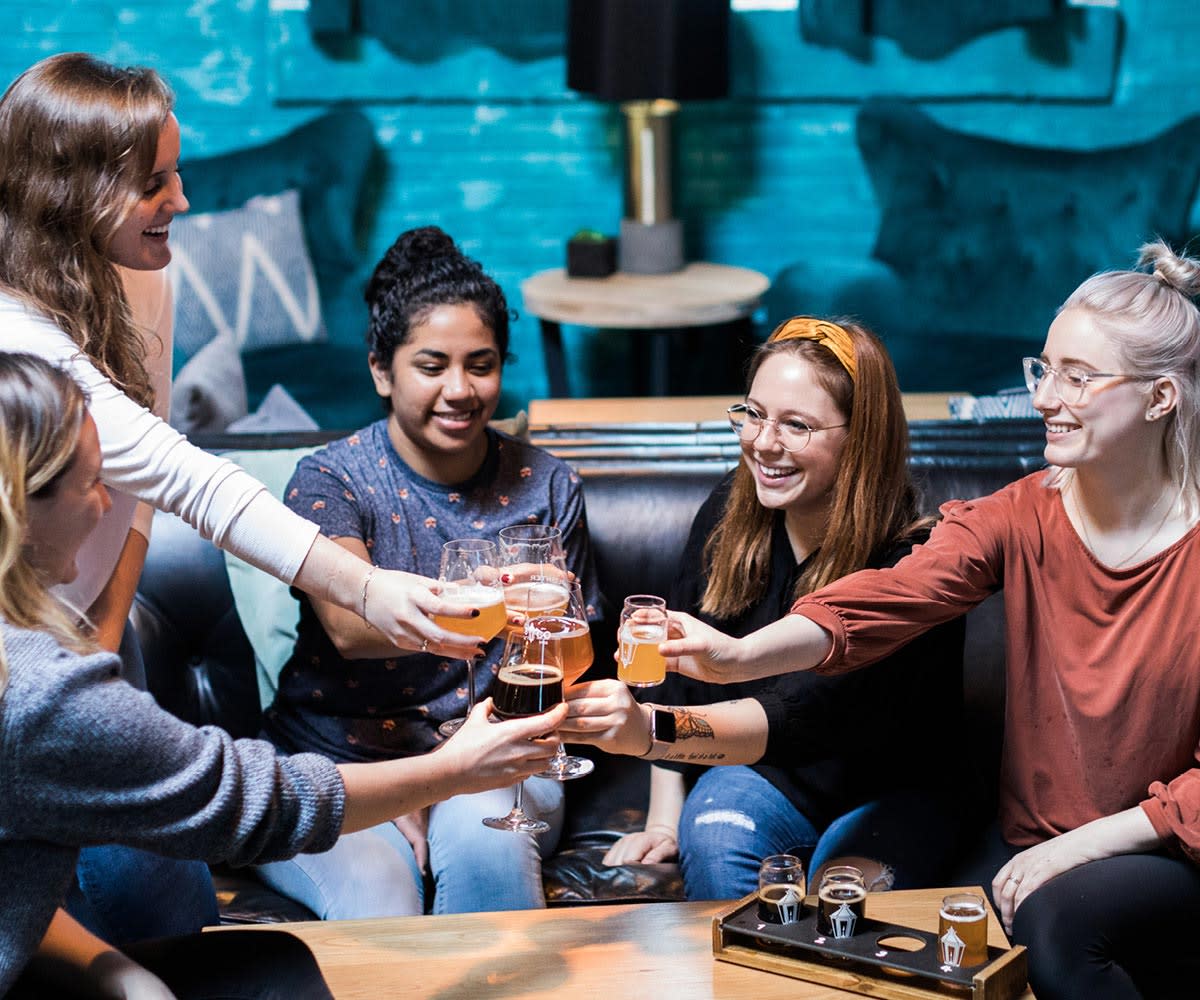 The taproom is appointed with comfortable accomodations for socializing over coffee or beer.

Two potential locations fell through over the course of a year—this after year and a half of planning by the once homebrewers, and (still) craft-beer fans, to get things off the ground. It turns out, the space they would eventually move into was right down the block from their apartment the whole time. 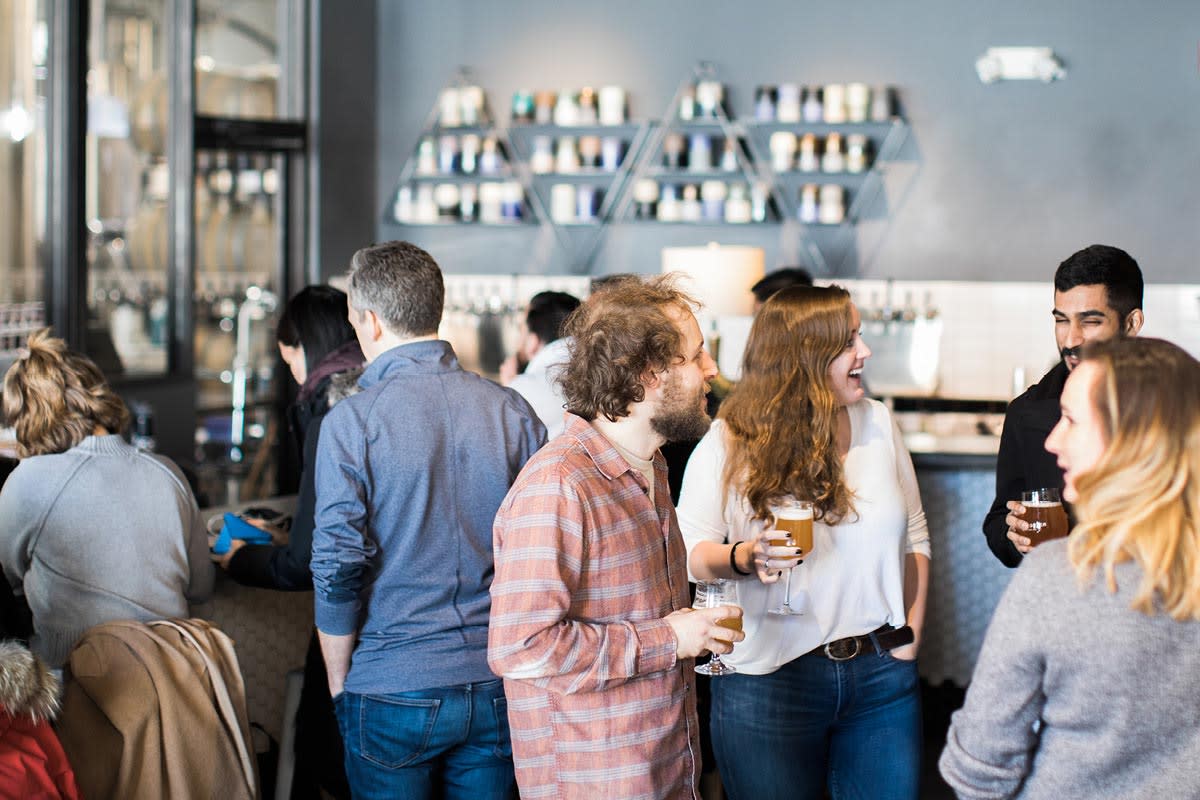 The stylish and contemporary taproom does double duty as a coffee shop in the morning and early afternoon.

There was an auto-mechanic shop that specialized in German cars that occupied a 10,000-square-foot space that the duo would walk by on most days. One day, Jones walked in, talked to the owner, and made the offer that if he ever wanted to sell, they would be willing to buy. A few days later, the mechanic called to say he was ready to retire and leased the space to Lamplighter. The brewery opened a little more than 3 years ago.

“We wanted to be in the community and have a taproom focus, a Cambridge focus,” Marvil says. “A focus on the people around us is something we emphasize.”

That’s not to say that everything stayed the same from the inception.

“The biggest thing is that when we started, we said that we’d have three flagship beers, a few seasonals, and a static menu,” Marvil says. “We quickly pivoted on that idea, and during construction we decided that we’d do a lot more funky beers, more wild beers.”

These days, when you walk into the front bar on Broadway (where the Metric Systems sign still hangs), you find a cozy two-level taproom with almost a dozen beers on offer as well as bottles from that wild program that can be opened on premises. 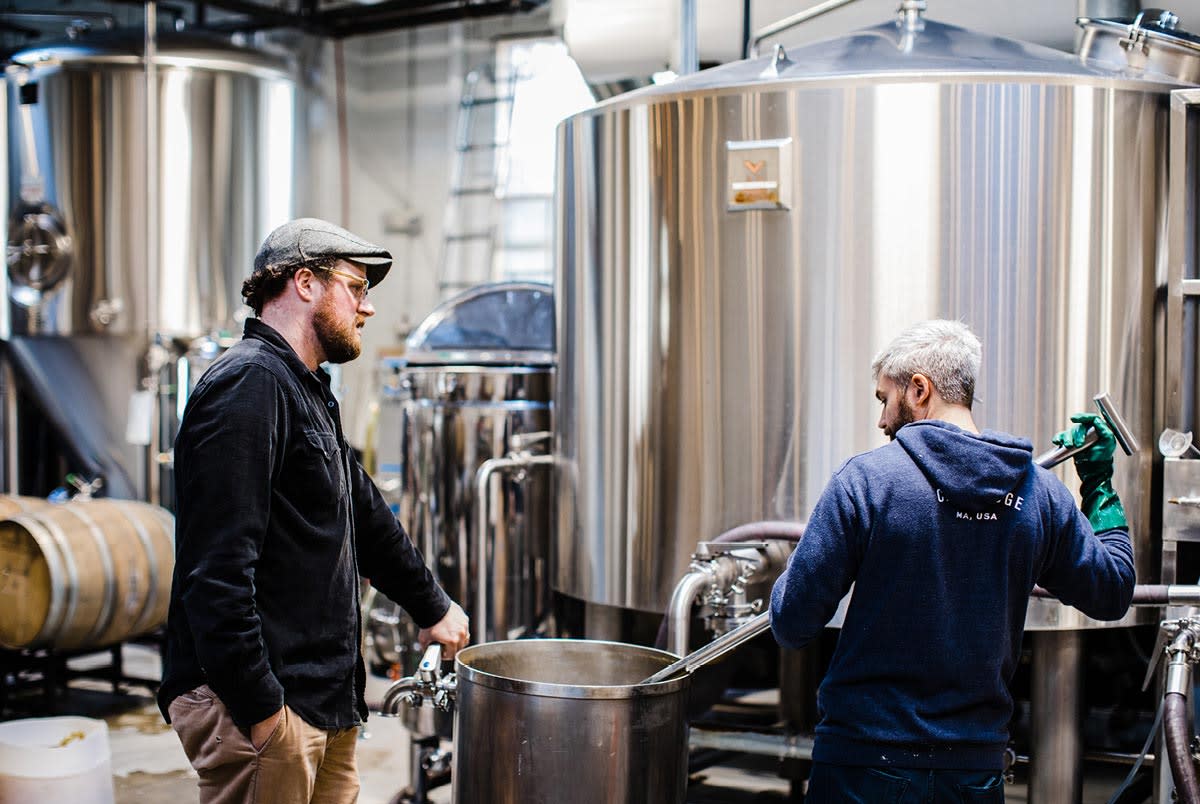 From Morning ’til Night

The notion of community looms large over all that Lamplighter does, and Marvil brings it up in conversation often. In the heart of the city, on a busy street surrounded by homes, other businesses, and commuters, there’s a lot of foot traffic. Rather than let potential customers walk past in the early-morning hours on their way to work, the brewery decided to open its doors each weekday at 7:00 a.m. (8:00 a.m. on weekends) to serve coffee.

As part of the garage renovation, the founders decided to put in a kitchen and quickly realized that running a food program on top of an active brewery would be daunting.

So, they found several workarounds. First, Marvil connected with friends who wanted to open a coffee shop, and the idea just clicked. Up until recently, the coffee shop—which occupies counter space at the front bar—and the kitchen was known as Longfellows. The friends have since moved to New Jersey, but the coffee continues with the Lamplighter team taking over that portion of the business as well, renaming it Pepita and adding tacos to the menu during the morning and lunch hours.

During the rest of the day, the kitchen is available as a pop-up space for visiting restaurants and chefs.

It’s a seamless transition, Marvil says. Pepita stays open serving coffee until 3:00 p.m. each day, and the brewery opens at 11:00 a.m. and goes until later on in the evening. There are a lot of folks who use the space as a remote office, starting off with coffee and then transitioning into a pint. The same is true with a lot of first dates.

“You can tell it’s going well when they transition from coffee to beer,” Marvil says.

When the coffee shop is closed, the brewery still serves cold brew on tap. 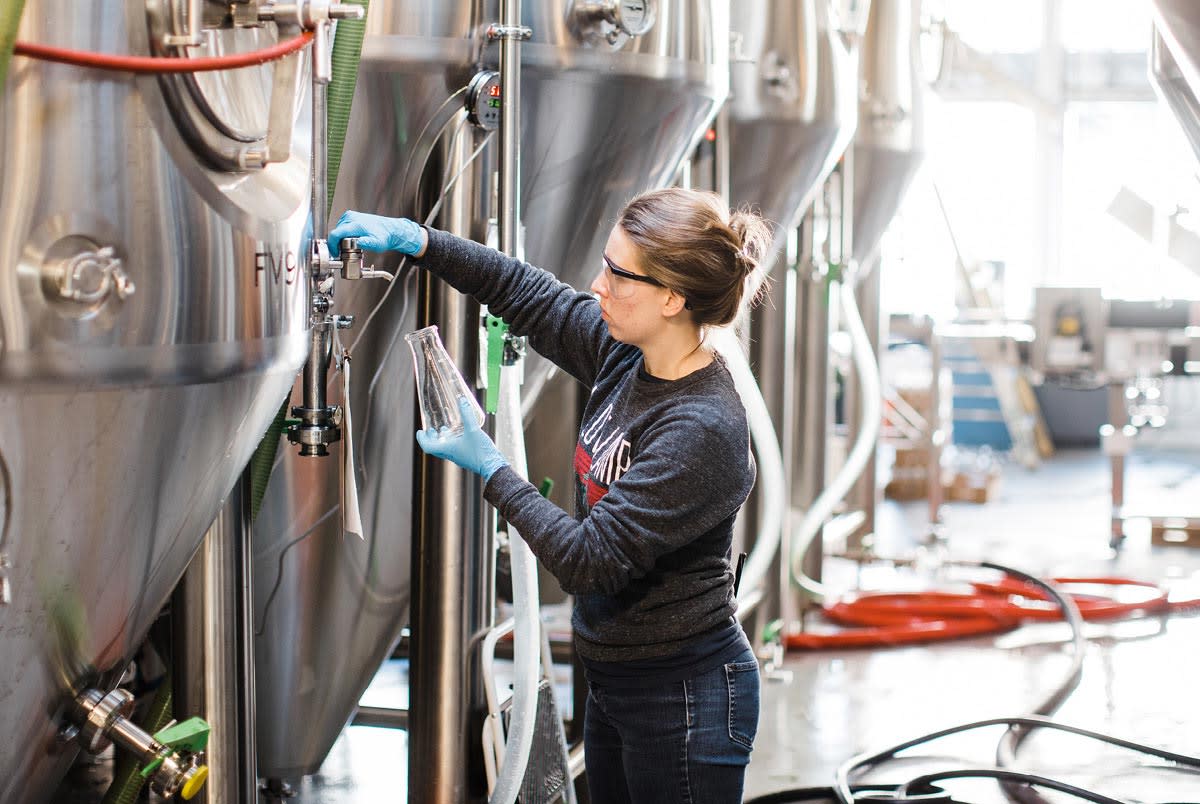 “We decided, right off the bat, to go big on the brewing-system size,” he says. “A lot of brewers open up with a small system and then pretty quickly need to go to a bigger one, and we wanted to avoid that.”

Having the larger system to turn out key favorites as well as keep the taproom stocked and the smaller system to brew one-off batches, seasonals, and test recipes before full-scale production has paid off for the brewery.

At first they would look at the production numbers, try to anticipate what would be needed, and brew according to that. In addition to the barrel program, the brewery also turns out several lagers, IPAs of all kinds, a few stouts, and Berliner weisse recipes. They also rotate some beers out for the seasons.

“We poured what we poured and then could focus on what’s in the cold box and maintain a schedule,” Fitzpatrick says. “It worked out nicely.”

Soon, however, they realized that they should just continually brew to capacity and find ways to move that beer into the market. Now they produce 16-ounce cans, kegs, and 750 ml bottles.

Fitzpatrick says the brewery is on track to brew about 6,000 barrels this year and that 75 percent of output is going out the door and into distribution, something Lamplighter does itself.

“Our truck is out six days a week,” says Marvil. 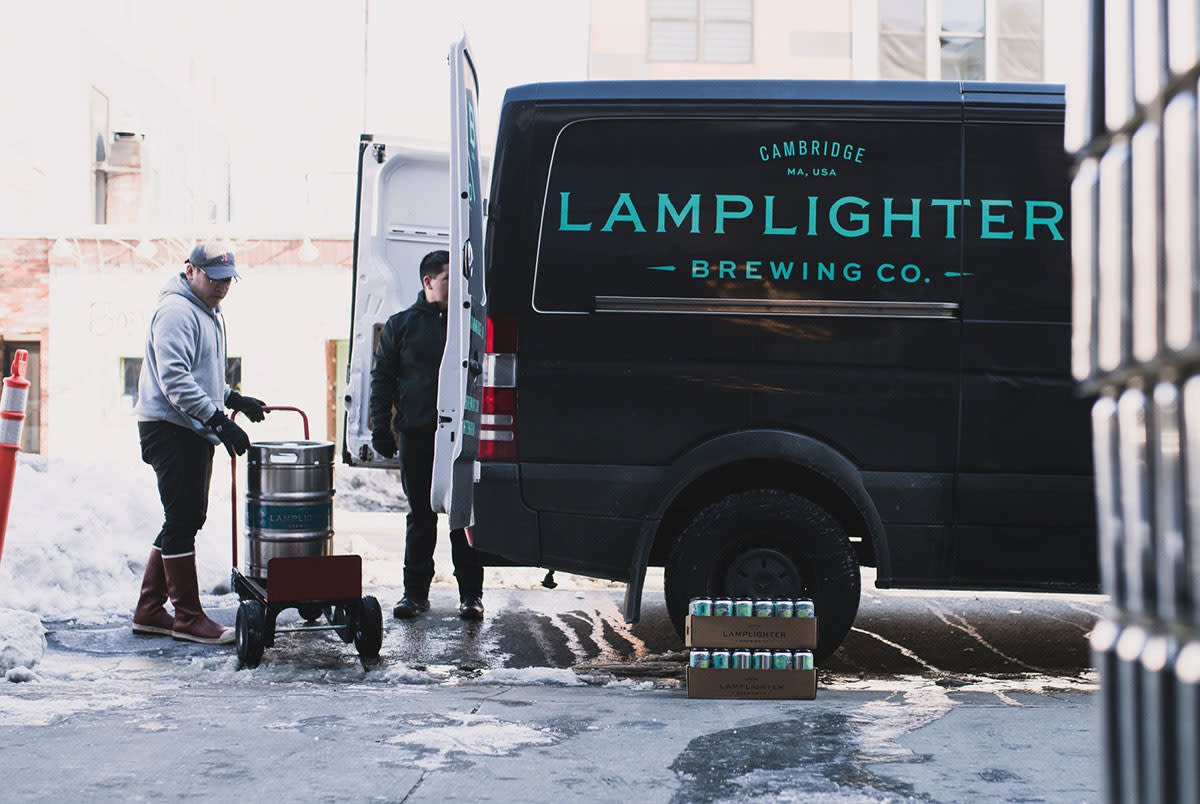 75 percent of the brewery’s production sees self-distribution to outside accounts.

The growth has sped up the timeline that the brewery had for internal expansion. Inside the taproom, to the right of the coffee counter, is an emergency egress hallway that led to a back room that the brewery had been using for storage. With an uptick in customers and with usable space available, they converted that back room into a secondary bar that can handle overflow when the two front rooms get a little crowded.

“One of the things no one told me when I was starting a business was that I’d be in people management,” says Marvil. “But getting to know everyone has been important to me, and it’s helped us develop, grow, and get the right people into the right spots.”

Marvil still bartends. She says it’s important to keep tabs on the day-to-day of the business by connecting with customers and feeling the overall vibe of the taproom. That also brings it back to community and the connection the brewery wants to forge. 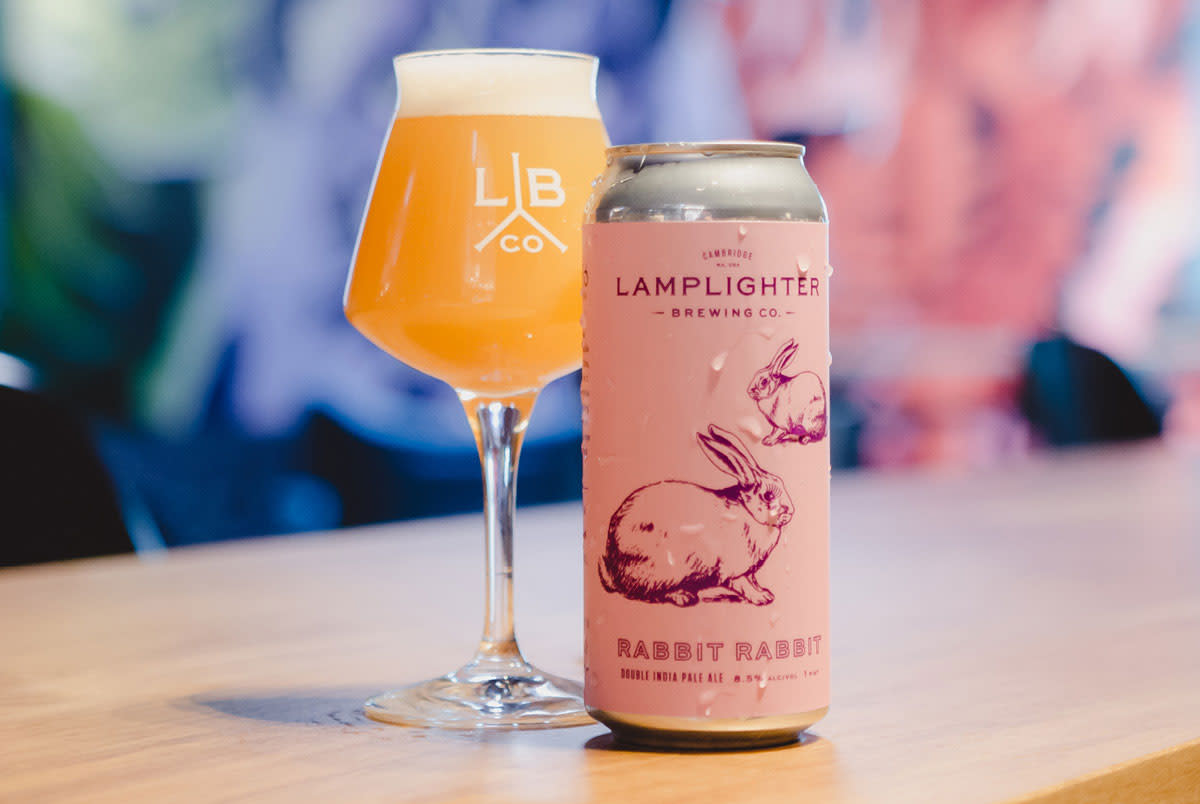 The brewery is known for everything from hazy IPAs to sour and mixed-fermentation beers.

Through the extended hours, the multiple uses for the space, and the deep local distribution, Lamplighter has been able to use its sprawling space (that still feels intimate) as a beacon to bring people in for longer than just a quick pint or a coffee to go. If the taproom model is the future for local breweries, it will take more than just a solid beer to get people to come back more than once and to dedicate their time to the experience.

In Cambridge, this brewery has figured out a winning formula.

Crack Open a Jar of [YOUR BREWERY LOGO HERE]

Some breweries are sharing their brands with food companies for mutual benefit.