The women of San Diego’s Mujeres Brew Club elevated their beer-education group into a full-fledged coop brewery. Now, their goals to educate, empower, and employ women in beer are more valued than ever—and it’s a model that could work anywhere.

In Spanish, mujeres means “women.” And in the bustling Mujeres Brew House, next to coastal Interstate 5 and practically in the shadow of San Diego’s iconic Coronado Bridge, it’s women who are running the show.

Mujeres cofounder Carmen Favela says they employ about a dozen staff members, all of them female. Most identify as Hispanic, Latina, and/or Chicana; that also reflects the surrounding Barrio Logan community, where almost three-quarters of residents are of Hispanic descent. It’s a tight-knit neighborhood, Favela says, where residents have an unusual ability to band together and oppose threats such as gentrification or pollution from the nearby shipyard.

That’s why it was crucial for Mujeres to get—and now maintain—buy-in from its neighbors.

“The community has welcomed us,” Favela says. “The community loves the space. And it needed a space like this. … Yesterday, I got a call, and the lady [says], ‘I love your place, I can bring my kids with me, and I feel comfortable.’ It feels great. I can’t say that I feel like that about any [other] brewery in San Diego.”

Mujeres is a rare example of a brewery that embodies the ideals of “community” as a top priority, rather than simply spouting it as a buzzword or optional bonus. As San Diego’s first Latina-founded and women-led community brewery and beer club, their first year in an established space proved that where there’s a will, there’s a way. 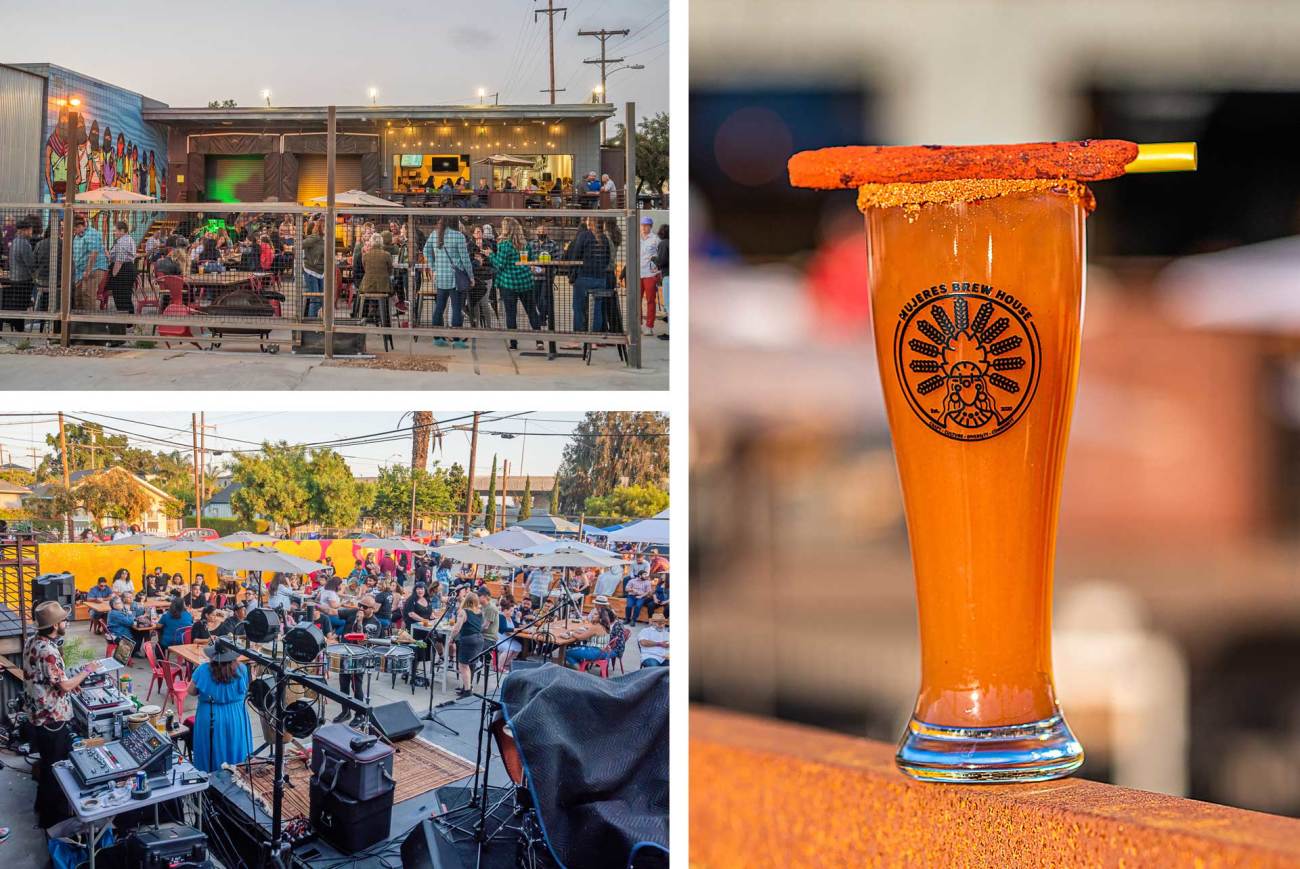 Left: Two views of the front patio show how it’s set up perfectly for outdoor community events and live music. Right: Micheladas are a customer favorite.

Founded in 2013 by Favela and her husband David, Border X was the first brewery in Barrio Logan. It focuses on Mexican-inspired flavors for their portfolio of rotating brews. Bestsellers such as their Blood Saison, brewed with hibiscus and agave, and their Horchata Golden Stout helped set them apart in a sea of IPAs. Their vision to bring craft beer to the barrio married two cultures in a way that San Diego had never seen, much less accomplished.

The Brew Club began as the notion of Favela and Esthela Davila, a Barrio Logan native and cohost of the Indie Beer Show podcast. They wanted to create a space for women to connect with one another and learn about beer in a comfortable, inclusive environment—one where men were welcome but not in charge. Border X’s sprawling outdoor patio was the most obvious venue. They held their first meeting in May 2019, expecting just a handful of attendees. At least 60 people showed up instead, and attendance never slowed down.

Then came the pandemic.

The club faced a choice not unlike that faced by small hospitality businesses: Continue or close. They chose to continue, but despite everything, they chose to take their initiative further. In the summer of 2020, Esthela noticed a vacant brewhouse previously occupied by now-defunct Alta Brewing, less than half a mile from Border X. She casually mentioned to Favela that it would be the perfect spot for the club to expand. It had the tanks, and it had the space.

By the end of the week, it had new tenants: Mujeres, which was preparing to go from club to business.

Like a true cooperative, the Mujeres members jumped into action. They hosed down the brewhouse, dusted the bar, cleaned the lines, and did whatever was needed to open their doors. Since they launched the business during the pandemic, Mujeres was not eligible for Paycheck Protection Program (PPP) funds. However, once they established a business plan with Border X’s financial backing and acquired a space of their own, they found that the pandemic could only slow their momentum—and there were advantages to that.

They opened in November 2020. “It was basically a soft opening,” Favela says. “We couldn’t have any gatherings, so we couldn’t really have an ‘official’ grand opening.” Eventually, they were able to throw an outdoor grand opening in June 2021. Meanwhile, after their accelerated timeline to open their doors, slowing down their rollout proved to be beneficial.

Olson has embraced the opportunity to take the helm at the women-centric brewery. “I hope to have found a forever home,” she says. “Mujeres is the only place in town that you will consistently see more women than men patronizing our venue. We try to create a safe environment for everyone who comes. We host events that celebrate underrepresented communities, and therefore, we have an amazing group of customers that come from all backgrounds.”

Favela says the response has proved that there was a need for this type of place. Women come to Mujeres “because we created a space for them,” she says. Considering the relative scarcity of women—and Hispanic women in particular—both in the industry and among craft-beer drinkers, nurturing comfortable and accessible spaces with them as the primary focus remains rare. Yet the benefits are obvious.

With her beers, Olson says she hopes to provide for those who might not already be beer enthusiasts. “There are a lot of people who say we are their first craft-beer experience because they were too intimidated to go to another establishment,” she says. “We are able to reach people who have previously been excluded from the craft-beer community.” If Mujeres is able to break down barriers of entry for new consumers, she says, the entire San Diego beer scene stands to benefit.

Indeed, that’s a lesson that could be applied anywhere. 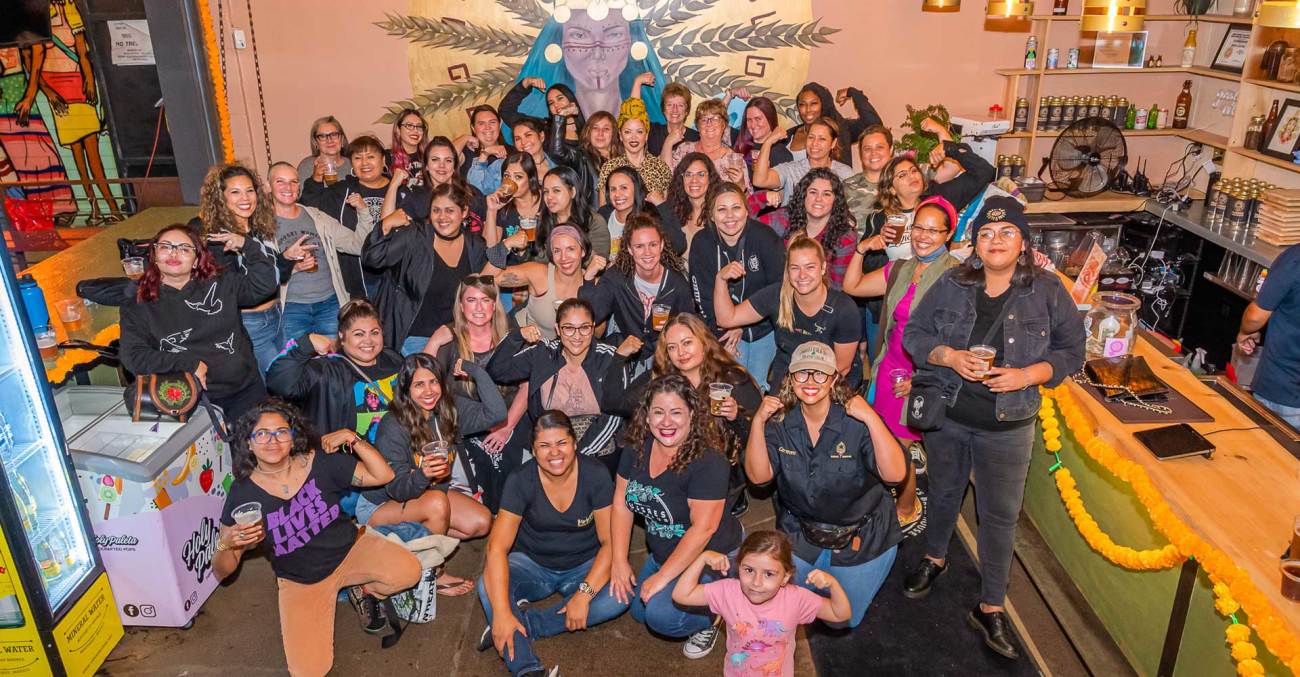 The Mujeres Brew Club gathered in the taproom.

While quality is a top priority, Favela says that a diverse tap list is equally paramount to appealing to a broad base of drinkers and keeping them coming back.

“People come in here and want to try stuff,” Favela says, noting that many patrons opt for flights to sample as many beers as possible, such as their hazy IPAs, amber ales, or pilsners. “Our lightest beer that’s always on tap—our Blonde Ale—that right now is kind of like our signature beer. It’s a great intro beer.” However, it’s the Mujeres Michelada—a popular Mexican beer cocktail served over ice, mixing beer with tomato juice, lime, and a spicy, salty, chile-dusted rim—that’s remained a top seller since day one.

“Our beers are always going to have some tie with our culture, whether it’s the name, the fruit, or the adjuncts,” she says. That includes the Café de Olla stout, for example, based on a Mexican coffee drink traditionally brewed in a clay pot with piloncillo sugar, cinnamon, and other spices. “For us, that’s part of our culture.”

Mujeres brewed about 160 barrels in 2021, Olson says, and she expects that to grow to about 240 barrels in 2022. Among other things, she plans to add a hard agua fresca and a gluten-free option.

Distribution is unlikely for now, Favela says. That’s partly due to their limited size, but also because they want to welcome customers for the full Mujeres experience as it was meant to be: on-site. (However, she says, “Never say never.”) Meanwhile, there are 32 oz crowlers for takeaway and a kitchen—also run by women, incidentally—providing Mexican food for those staying to enjoy the outdoor space.

Events and Education Are Integral

Mujeres’ goal has always been to educate, empower, and employ women in all aspects of production. However, the pandemic has complicated the education aspect—especially at Border X’s second location in Bell, California, where they had hoped to replicate a Mujeres-like club for the Los Angeles area. “November 2021 was our goal, but now it’s looking more like spring 2022,” Favela says.

Olson also hopes to share her brewing expertise once Mujeres Brew Club can safely and consistently meet again. “It’s the one component that has been missing since I started,” she says. On the plus side, the ongoing buy-in from Mujeres members and the surrounding community has been a major boost for the burgeoning brewery, pushing it from concept to local icon in a short time.

Beyond serving beer, events such as trivia, lotería nights (think traditional Mexican bingo), live music, craft fairs, and even healing sessions—many of which are Latina-led—have helped connect Mujeres more closely to the Barrio Logan neighborhood. “We stay in business because of our craft and our beer,” Favela says. “We’re just taking it a step further. We’re inviting the musicians, we’re inviting artists, we’re inviting small entrepreneurs and allowing them to use this space.

“That’s not part of our ‘business,’” she says. “This model, in other words, is not another business. That is just something that we’ve added, in addition to our brewery experience.”

It hasn’t been without challenges, but looking back on their collective accomplishments is mind-boggling for her. “The whole year has really just been a huge learning for us and the team,” she says. “But it’s also been amazing—it has been absolutely amazing to see the amount of support and the amount of women empowerment by other women, by other community leaders.”

They’ve gotten this far without any similar models to follow, figuring it out on their own as they go. “I have to say that I am pretty proud that we’ve made it one year. Because you just don’t know, right? I mean, no one could have showed up six months into this. … It’s not like we had a road map. It’s not like we had professionals teaching us and guiding us. It’s all passion.”

From left: The taproom is designed to feel welcoming; Mujeres will brew about 240 barrels in 2022 on their small Premier brewhouse.

“We made it through one year,” Favela says, taking a moment to envision the future. “That doesn’t mean we’ll make it through another year. So what that means is [more] education, innovation, and learning.”

It also means continuing to grow. “We’re creating new positions for the current team,” she says. “We now have an event planner, we now have Samantha leading the brewhouse, [and] Esthela will continue to innovate the club to further the education part—not only for our team members, but for new people who want to learn more about craft beer.”

Favela’s overarching hope is that the Mujeres method of community partnership and collaboration doesn’t remain limited to San Diego. It can work elsewhere. Her advice to other breweries: “Don’t be afraid to work with other people. It helps everyone. It helps us when the artists invite their friends for an art show. It’s a mutual gain and relationship for the both of us.”

Even with those ideals set early on, she says that taking that sudden leap from monthly club to full-blown co-op brewery was scary—yet ultimately worth every moment. “I’m proud of myself for taking that chance,” she says. “Not just myself, but the club and the team and the girls—it’s not just me. It’s a group effort.”

Beth Demmon is an award-winning beer journalist and certified beer judge based in San Diego. Her work has appeared in Good Beer Hunting, CraftBeer.com, and VICE Munchies, among others.

Like it or not, social and political issues are becoming impossible for breweries and other businesses to avoid. Here is concrete advice on knowing when and how to get involved, and on how to choose your battles.