A rough, surreal year continues, and many breweries may have to shut for good by the time it's over. But what if yours were just getting ready to open when the pandemic struck—in the middle of the city most severely affected by the virus?

At first, the planned opening of Wild East Brewing in Brooklyn, New York, went about like most of them do—which is to say, there were delays. The initial plan was to open in the fall of 2019. After months of planning and building, they were finally able to start brewing on December 17, 2019, expecting that their taproom would be able to open soon afterward. Then? More delays, in construction and red tape.

“That was missed by… whatever is larger than a country mile,” says Brett Taylor, cofounder and head brewer. “I brewed a lot of beer in January and February with the expectation that we were going to have an open taproom. But things didn’t work out for various reasons.”

With his partners Lindsay Steen and Tyler March, they distributed what little they could and used tap takeovers to help build local cachet. Finally, as they rolled into March, all signs pointed toward the taproom opening in April—for real. Things were looking up. On March 10, they hosted a Pink Boots brew day, making Hypatia’s Wit—a white beer with zest from pink oranges, pink grapefruit, and fermented with Brettanomyces. They were looking forward to pouring that and other beers in their new taproom.

“It became apparent that we weren’t ready to open until mid-April,” Taylor says. “We were pretty ready to do that. But then COVID slammed the brakes on everything.”

One result of the shutdown was a relaxing of the rules for breweries that wanted to sell beer to-go or deliver it. Suddenly, Wild East no longer needed a certificate of occupancy to do that—essentially, they didn’t have to wait for their taproom to be finished and inspected before they could start selling beer. “So we just pivoted into to-go sales,” Taylor says. It started with crowlers—so many crowlers—but they soon realized that they would need other packaging. One weekend they sold 250 of them from Friday to Sunday. With more breweries across the country filling up crowlers to meet the demand for to-go beer from taprooms, it became difficult to source the materials. “There are not enough crowlers in the world for us right now,” Taylor says. “So, we had to start canning.”

They made arrangements with a mobile canner, but by the end of March, Taylor had a problem: He was sick. Symptoms included a low fever, lethargy, loss of taste and smell, and a minor cough. He was able to see a doctor and get tested. He had the coronavirus.

The illness and quarantine kept him away from the brewery for two weeks. He missed his own brewery’s first canning run because he had COVID-19.

The canning was a necessity, and it was in full swing by the time he returned. Before long, they were selling roughly half of their beer in cans and the rest on draft via crowlers. Taylor was brewing on their 30-barrel system about twice a week, but not at full capacity. “I’ve been doing 15- to 20-barrel batches, depending on how things play out,” he says. “Because we’re not able to move beer through the taproom, I have to basically brew everything for canning.” And he wants to make sure they can sell whatever he brews. “I don’t want there to be too much of a lag.” 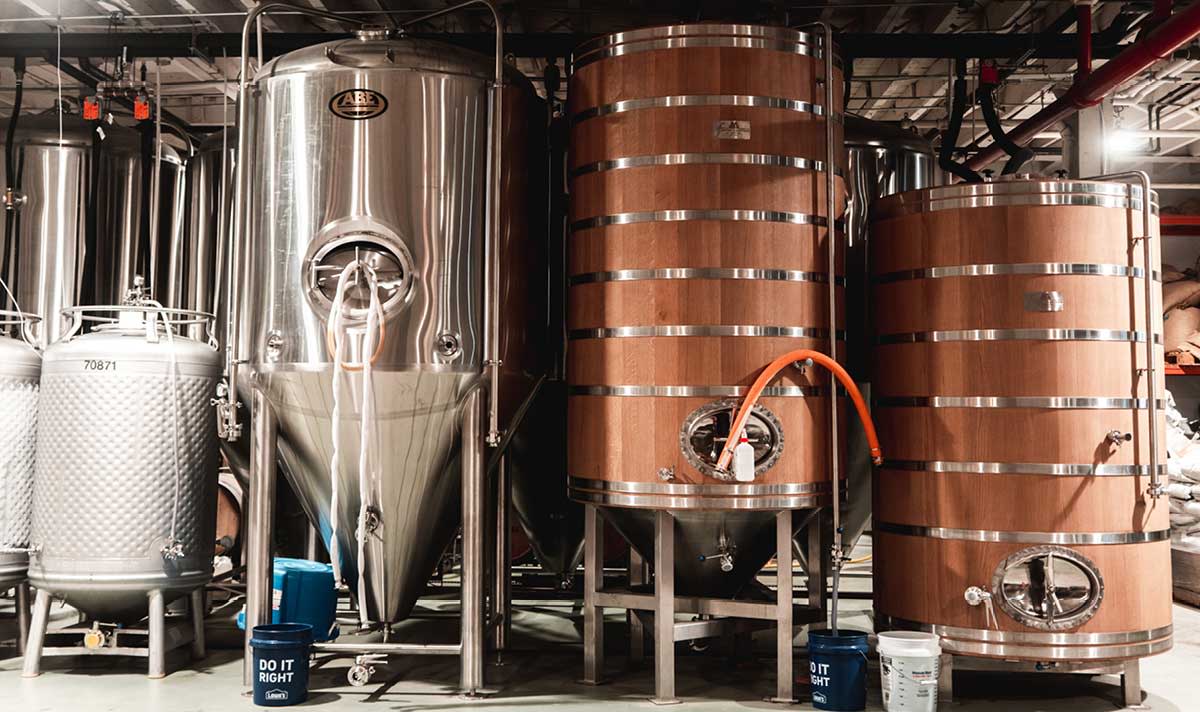 Living the Dream, Despite the COVID Nightmare

Taylor’s background is in journalism. Now 45, he spent years making infographics and maps for the New York Times and Wall Street Journal. He got heavy into brewing as a hobby, filling up his apartment with carboys full of various mixed-fermentation beers.

“What I really loved to do was homebrew,” Taylor says. “So what I did at the Journal was to go to brewing school while working full time.” He took courses at the American Brewers Guild, which is based in Middlebury, Vermont, and specializes in distance learning. He had an internship at Sixpoint Brewery, then a job assisting at Keg and Lantern Brewing Company, both in Brooklyn. Finally, he got a job brewing with Chris Cuzme at Fifth Hammer Brewing in Long Island City. Taylor says that was a difficult gig to leave behind.

“My time at Fifth Hammer was amazing,” he says, “because not only did I get to train on the same brew system that I ended up buying, but I basically got an internship in opening a business. It was such a great experience. I would have stayed forever, because Chris and I are very much on the same page about good beer.”

But the chance to run his own brewery was the dream he couldn’t refuse.

The system they bought for Wild East was an ABE brewhouse, similar to what Taylor had used at Fifth Hammer, but larger and with modifications to allow decoction—he knew from the start that he wanted to brew some traditional lagers.

So far, he says, it’s been a joy—and remarkably stress-free, all things considered. “It’s like being a home brewery when I had 15 fermentors of lambic. I get to do whatever I want. I get to make the beer that I want to make.”

Taylor has long been drawn to mixed-fermentation beers. One of Wild East’s initial flagships is Prescience, a 5.4 percent ABV farmhouse blonde with Taylor’s own blend of Brettanomyces strains. Another favorite of his is Turnstyle, a no-boil, mixed-ferm Berliner-style weisse that also gets Brett and matures in a foeder.

Wild East has two foeders now, both from Foeder Crafters in St. Louis, Missouri. One is a conical meant for primary fermentation, while the other is more traditional, lately used for solera-style blends—but Taylor wants more. “We have 75 barrels right now that are filled,” he says. “Eventually I’d like to cut down on the number of barrels I have and increase the number of foeders.”

Wild East brews its share of hazies—pale ale, IPA, double IPA—but Taylor has been happy to see the lagers take off locally. Their first two beers in cans were a decocted Czech-style pilsner called Patience & Fortitude and a hazy pale ale called No Pretense.

He and his partners were surprised to see the pilsner sell out a few days before the hazy pale did. They recently followed that up with a Czech-style polotmavý (amber lager) called Moon Atlas. 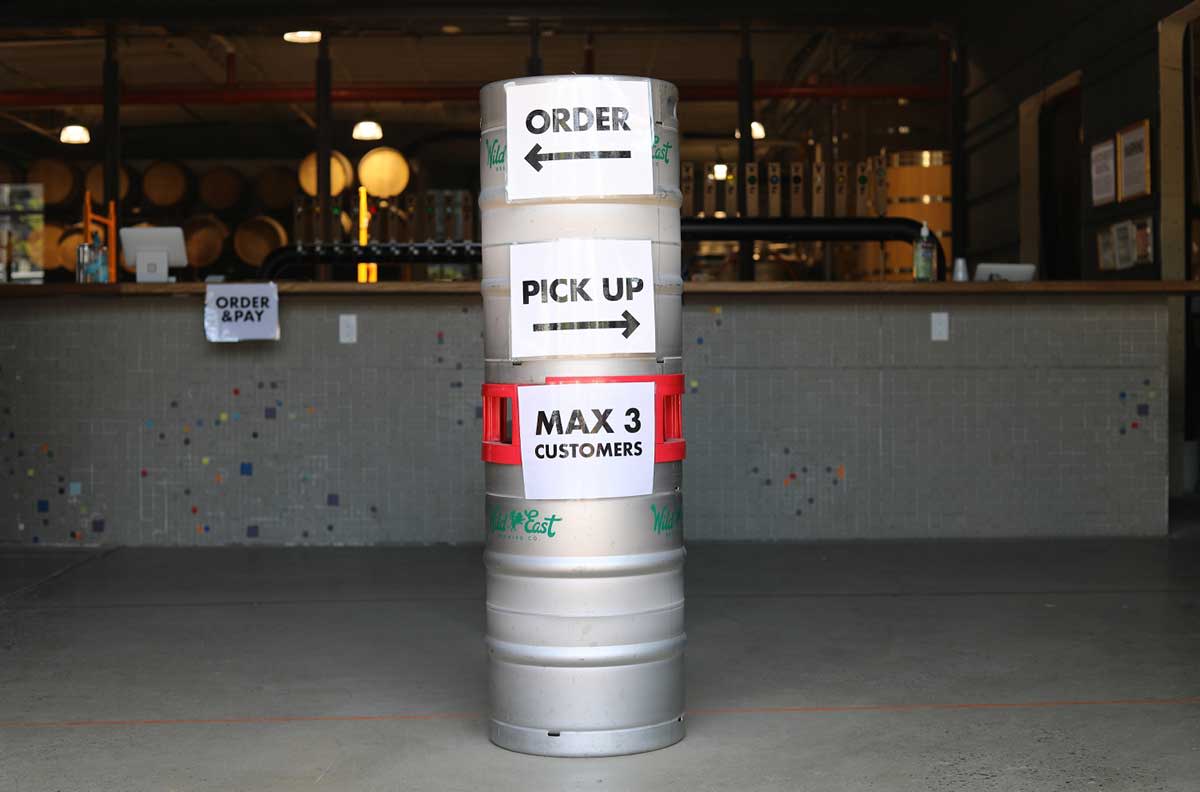 The COVID shutdown delayed Wild East’s taproom construction (again). On the bright side, it also meant that there was no pressure to open it right away. Meanwhile, deemed an essential business, they were able to apply for permits to keep building. “So that’s the deal,” Taylor says. “We’re finishing up construction and just continuing to-go sales. We’ll be ready when stay-at-home orders are lifted.”
Those orders were already lifting across much of the country, but it was unclear when bars and restaurants in harder-hit New York City would finally get that chance—Taylor guessed it could be late June or July.

Breweries don’t get much younger than Wild East, but the pandemic and lockdown are enough to give any small business some premature gray hairs. Already, Taylor says, “our brewery has pivoted more times than a Russian hockey player in heavy traffic.”

But as usual, Taylor—who started a brewery amid a pandemic, got the virus, and still seems really chill about the whole thing—has a way of seeing the beer glass as half full. “In a way, it’s been a blessing,” he says. “If we’d had the taproom fully open, and we were trying to do everything all the way, it would be more difficult.

“This is the softest soft opening ever.”

Even in New York City, meanwhile, more people are starting to step out—mostly carefully, wearing masks and respecting distance. Taylor cuts some slack for his fellow New Yorkers if they relax a bit now, as they’ve had a harder time than most Americans with the virus so far.

“I’m not talking about the people in other parts of the country who don’t think this is real,” he says. “Those people are fucking idiots.”

Neil Witte, draft-beer wizard and founder of Craft Quality Solutions and Tapstar, offers practical tips on ensuring that untainted beer flows from draft systems that have been idle.