If you’re going to run a small brewery, there’s no rule that says you have to do it full-time. Here are the perspectives of two entrepreneurs who went pro without giving up their other careers.

Kyle Harrop of Horus Aged Ales works full-time as an accountant for an aerospace firm, while operating the brewery on the side. Photo: Courtesy Horus Ages Ales

There are about 8,000 breweries in the United States now and, we might suppose, just about that many different ways of running them. One of those ways, especially as more tiny operations have taken root, is to moonlight—that is, to run a brewery as a sideline.

Recently we heard from two brewers in very different parts of the country who have chosen this path. Here are their perspectives.

While he is better known as the founder, brewer, and blender (and sure, accountant) for Oceanside, California’s Horus Aged Ales, Kyle Harrop’s other job—keeping the books for an aerospace-engineering firm—is the one that made it all possible.

“The business model for Horus is centered around me being able to keep my day job in the aerospace industry and make beer professionally as a side project,” Harrop says. “This has not changed since Day One in 2015. My finance career has paid very well, has great benefits, and has a lot of flexibility.”

Horus is a blendery. Harrop brews the beer elsewhere—not only at one of five breweries around San Diego County, but also via dozens of collaborations with breweries across the country. Then he barrel ages and blends the beers in his own facility, a 4,000-square-foot warehouse in an industrial park. Very little of that beer gets out into the trade; some goes out via his membership club, while some appears at select festivals. He says he produced about 200 barrels in 2019 and doesn’t expect that to change much over the next few years.

In the near-term, Harrop has no plan to change his job arrangement—especially as his second child is due (at press time) any day. “My young family comes first, and I do not want to put them at unnecessary risk right now,” Harrop says. “I look around and see all these breweries that grew exponentially really quickly but are struggling at the moment. One thing for sure is I do not make near enough beer at the moment to support a family in Southern California.”

When it comes to distributing what little beer he makes, he prioritizes the members of his bottle club. “These are the people who have supported my dream since Day One, and I want to make sure they always get special treatment as a result. This is why most of my bottle offerings have been exclusively available to them.”

Currently, Harrop is making only about one batch of beer per month but still has to pay his expenses. “I also use a lot of lavish ingredients, so each batch is very expensive, and I don’t have a taproom, which would be a major and necessary source of consistent revenue,” he says. “While overheads may seem low without a brewhouse, my barrel warehouse and packaging facility are still very expensive compared to commercial real estate in other parts of the country.”

He doesn’t rule out altering the job arrangement in the future, but not soon. “I am probably three years away from making a final decision to do just beer or to continue doing some version of what I am doing right now,” he says. “I will look at where the brand is in a few years and ultimately make up my mind, especially since I just renewed my lease at my current location for another 36 months. In the meantime, things will stay mostly the same, and that is totally fine by me.”

Recently Harrop decided to add some non-barrel-aged beers to his repertoire. If he had done that sooner, he says, things might have progressed more quickly. “However, half a decade later, I now have 60-, 40-, and 17-barrel foeders in addition to all of my barrels and puncheons,” he says. “I think I am at about the largest I can possibly be production-wise that I can continue to handle on my own.”

Harrop’s long-term dream is to take Horus to a farmhouse brewery somewhere in Southern California. In the meantime, “I envision that the accountant-brewer will remain my job title until 2022 or 2023, while my wife and I juggle two kids and full-time jobs.” 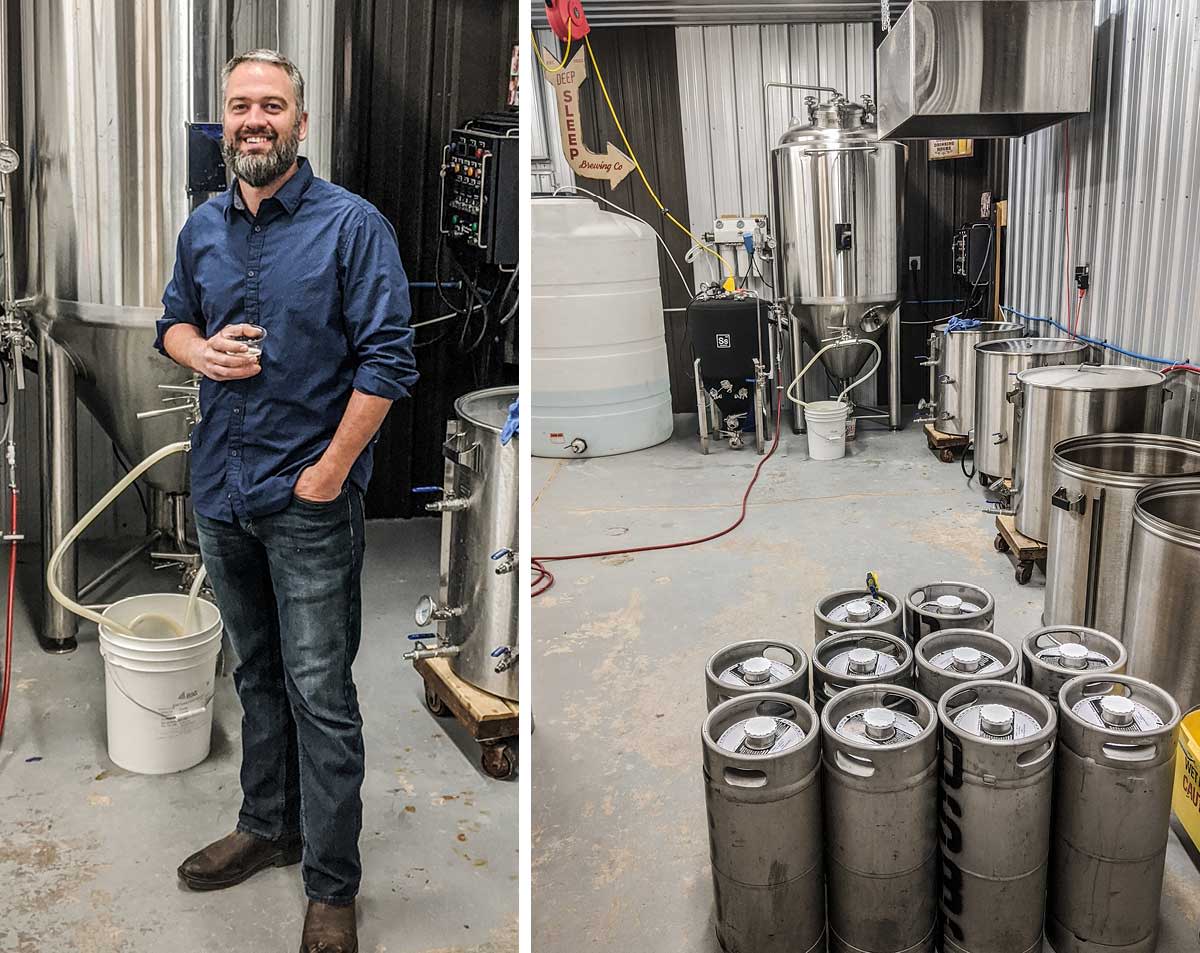 Nick Lyons has chosen a similar path to Harrop, but in a very different place and with less fanfare. In rural Washington, Missouri (population: 14,000), Lyons works as a specialist providing anesthesia services to local medical groups. On weekends, he runs his brewery, named (appropriately) Deep Sleep.

The tiny but orderly brewhouse is on one side of his freestanding garage, behind the country house where he and his wife raise five daughters; they range in age from 2 to 14. The brewery is fully licensed, including for winemaking (Lyons makes cider in addition to his four main beers). The winemaking license lets him self-distribute to a handful of accounts in the area, mostly restaurants. “I really don’t have any overhead,” he says. “But the money—it’s not anesthesia money.”

Lyons graduated from nursing school in 2001, and five years later became a specialized nurse anesthetist. Now he and a business partner run an anesthesia-services company—so he already was an entrepreneur. Starting a small brewery business on the side wasn’t a huge leap.

Lyons started homebrewing in 2012. After a few years, “I started brewing more and more, the batches were bigger, and there were more people interested,” he says. “I’m always up for a challenge. I like business, and I like beer. And it’s fun. At the hospital, everything’s so serious—and it should be. But this is just beer.”

It’s a small kit. His mash tun and kettle are each 55 gallons, but he uses extensions so that they can manage about 100 gallons. On brew day—usually twice a month—he brews two successive batches to fill his solitary 200-gallon fermentor. “If I make any changes this year, that’s what I’m going to do: add another fermentor.”

When he needs to condition his beer for longer than two weeks—such as for his Munich-style helles—he racks to kegs and lagers it in those. Besides the helles, he regularly brews a 10-percent-ABV double IPA, a smooth and malty Irish red that is his best seller, and an imperial stout that sometimes ages in bourbon barrels from a local distillery. All have been well received locally. He brewed 63 barrels of beer in 2019, after brewing 45 the year before.

His small size means he can be flexible about things such as hops, which he buys off the spot market via the Lupulin Exchange. “It’s perfect for guys like me because I can buy 22-pound, 44-pound bags. I don’t need 500 pounds of hops.”

Around Franklin County, Missouri, savvy drinkers keep an eye out for the colorful laryngoscopes—tubes used for looking down throats and administering drugs—that mean there is a Deep Sleep beer on tap.

“I’m not afraid of failing,” Lyons says. “You’ve got to embrace it, really. Everybody’s going to fail if you try something. If you look like a fool, at least you tried. I think a lot of people sell themselves short on what they could try.”