From Waffles to Cyberpunks: Cross-Promo Beers Are Alive and Well

The pandemic may have hindered the hospitality business, but in no way has it hindered the ongoing proliferation of offbeat, often counterintuitive brewery team-ups with other enterprises.

That feels like two years ago, because 2020 was 2020. But no, that was August—a lifetime ago, in pastry-beer years.

Breweries joining forces with non-breweries for some publicity-grabbing marketing gestalt is not a new concept, by any means. Do a bit of searching online, and you can find adorably innocent threads from 2014 questioning whether such cross-promotions were just icky, crass commercialism (that one was in response to Ommegang’s Game of Thrones series, if you’re curious).

But by any metric, 2020 was a banner year for high-profile beer-plus-something-else attention-getting team-ups.

A new one for that file is Waffle House Bacon & Kegs, brewed by Oconee Brewing in Greensboro, Georgia. The beer is a bacon-flavored, 6.5 percent ABV red ale. “The malty sweetness of the base beer blends perfectly with the salty, savory, and smoky bacon extract to create a delicious and unique beer,” the brewery says.

What makes this collab especially unusual is that Oconee is pretty small, very local, and only a few years old; Waffle House is a massive 65-year-old brand with more than 2,100 restaurants scattered like hash browns across half the country. Both companies are based in Georgia, though Greensboro is about 80 miles east-southeast of Waffle House HQ in the Atlanta suburb of Norcross.

However, when it comes to publicity, the size of the brewery is irrelevant. National media covered the Waffle House bacon beer with aplomb. After an article in Food & Wine, it appeared in USA Today and on CNN, among other outlets.

“We’re still pinching ourselves that we have this opportunity,” says Leslie Tillery, Oconee’s media director. “Waffle House has been amazing. We’ve learned that they actually have a pretty small corporate staff, and most have been with the company for a long time, so they’re a close-knit group. I think they’ve felt a connection to our small-town and small-business vibe.”

Tillery says she reached out to the restaurant chain after remembering that the Waffle House kiosk at SunTrust Park—home of the Atlanta Braves, now known as Truist Park—served beer back in 2018. “I thought—hoped—that they might be interested in a craft-beer collaboration, so I found an email address for someone at corporate headquarters and proposed the idea. He was kind enough to respond with willingness to discuss the idea more.”

Later, a group from Waffle House visited the brewery to taste some different beers with Oconee’s brewmaster Taylor Lamm. One they liked was a red ale. “Bacon extract was added, and Bacon & Kegs was born,” Tillery says.

Legally, in Georgia, Oconee can’t ship beer to customers, so Bacon & Kegs is only available locally (six-packs or a growler). It’s available starting December 18. “Road trip to Greensboro, Georgia,” the website says. Since unnecessary travel is dicey these days, we can all hope that the beer will still be there when the pandemic is over. 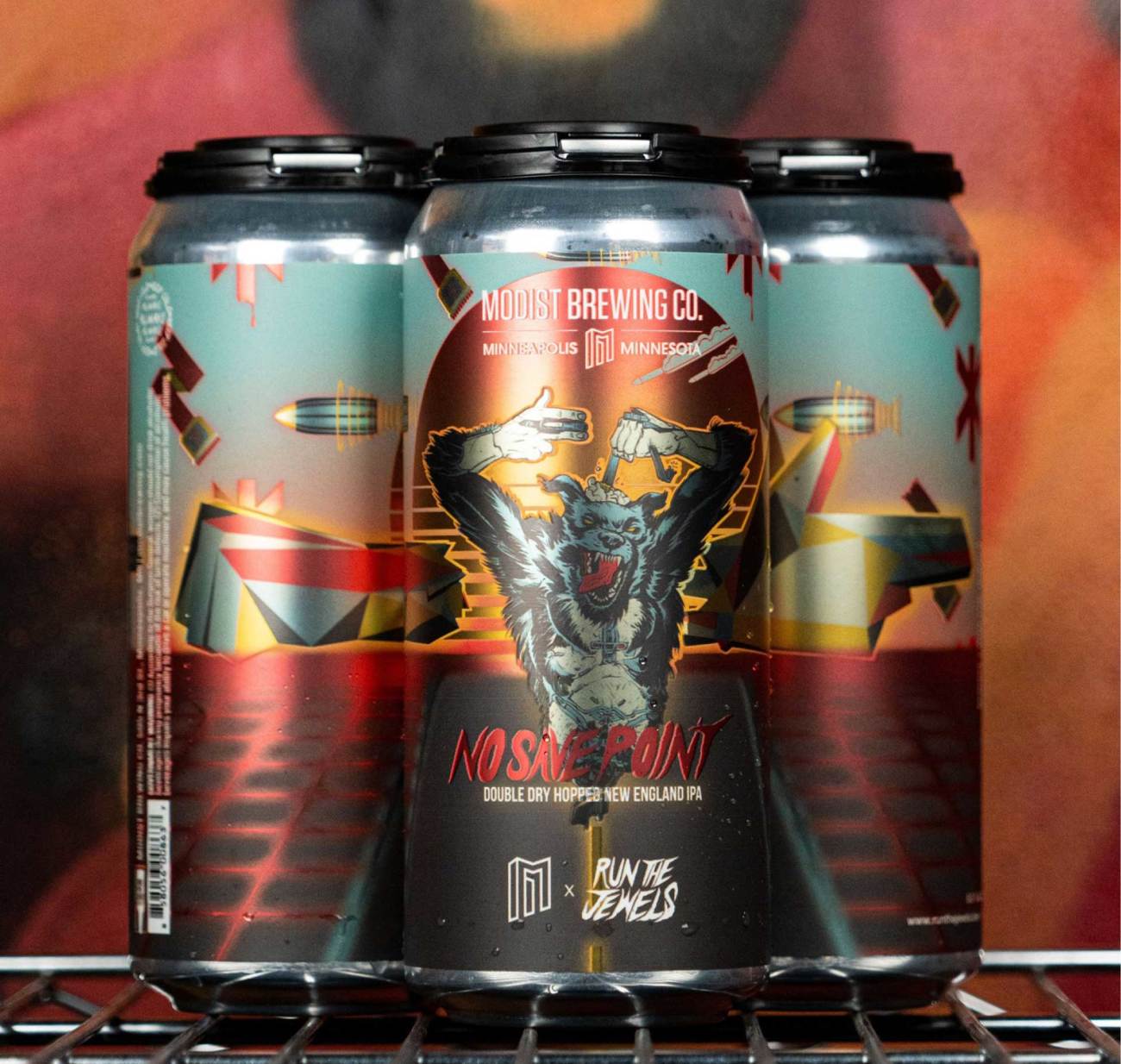 For breweries looking to make a splash, these team-ups aren’t limited to food companies. For example: They can involve musical artists. Or video games. Or both at the same time.

The hip-hop super-duo known as Run the Jewels announced in November its collaboration with 13 breweries around the world on No Save Point. Each of the breweries—including Horus Aged Ales, Mason Ale Works, Modist (pictured), Pipeworks, Weathered Souls, and others—has brewed a beer of that name, riffing in different ways on a hazy pale ale base recipe. For example, London’s Deviant & Dandy turned theirs into a sour blackberry IPA, while in Texas, the Weathered Souls version includes coconut and marshmallow fluff.

Comprised of rappers Killer Mike and El-P, Run the Jewels are no strangers to the occasional craft-beer collab. The first was Stay Gold in 2017, an IPA brewed by five different breweries in an initiative led by Interboro Spirits & Ales of Brooklyn. They’ve included breweries overseas, too, such as a CBD-infused pilsner brewed with Berlin’s BRLO in 2018. BRLO also is brewing its No Save Point as a Citra-hopped hazy pale ale.

So, No Save Point is a beer, and it’s a Run the Jewels track—but notably, this particular track is featured in the highly anticipated video game Cyberpunk 2077, scheduled for release on December 10. So, this is a triple cross-promotion, featuring a video game, a piece of music, and some beers. All the makings of a great evening.

Crack Open a Jar of [YOUR BREWERY LOGO HERE]

Some breweries are sharing their brands with food companies for mutual benefit.