Designing Labels: The Craft Behind the Art

What’s the story behind that eye-catching label? Ale Sharpton asked three breweries about their favorite designs from 2020 and about how they came into being.

Label designs are the first things that customers see, but the meticulous creative process behind them is largely invisible—from knowing the beer style, to brainstorming on the concept, to actually designing the artwork, and ultimately to winning over drinkers to keep them engaged with the brand. Here, we asked three successful breweries—Creature Comforts, Trillium, and New Belgium—to each share the story of a captivating can design from 2020 and how they got there.

Creature’s cans have been consistently eye-popping and easily recognizable, even on a Hollywood level. (Their flagship Tropicália IPA and Athena Berliner weisse appeared in Avengers: Endgame.) Here, David Stein, cofounder and VP of brand development and creative, discusses the art for Born Dreaming—a hazy double IPA of 8 percent ABV, brewed in collaboration with Highland Park of Los Angeles.

“I am going with our Born Dreaming can design; it’s hopped with Strata, Citra, and Mosaic. This beer was our first venture using Incognito, a hop product made specifically for use in the whirlpool. Born Dreaming is one of our limited releases, which are most often limited to sales out of the brewery versus distribution; they generally sell out pretty quickly. These limited releases give us a little more flexibility and freedom to go outside of the box with the branding.

“First, I just love the design. In addition, since Born Dreaming is a collaboration, it offered a fun opportunity to collaborate on the brew and the label design.

“The name ‘Born Dreaming’ was inspired by both our breweries’ curious nature and the idea that we have all been dreamers since the day we were born. We worked with brewer Bob [Kunz] from Highland Park to get some inspiration on the colors from some of the album artwork of his favorite psychedelic Afrobeat albums. The primary design is the silhouette of a baby within the silhouette of an adult, which illustrates the meaning behind the name. Another fun layer to the artwork is how we used a variety of both Creature Comforts’ and Highland Park’s design elements coming out of the “minds” of the people on either side of the can.

“I really enjoyed this level of collaboration on the can design. As far as the artist goes, our graphic-design manager, Michael Beeson, designed the artwork, and Highland Park’s artist, Scrap Labs, sent us several pieces of their artwork to pluck from. The main thing we do for social media is to get our photographer Mark Taylor to take beautiful photos to showcase the cans.

“We released this beer for the first time in 2019, and it was very well received, so we decided to brew it again this year; it released in July. We’re not sure what the plans are from here, but I wouldn’t be surprised if we brew it again sometime in the future.” 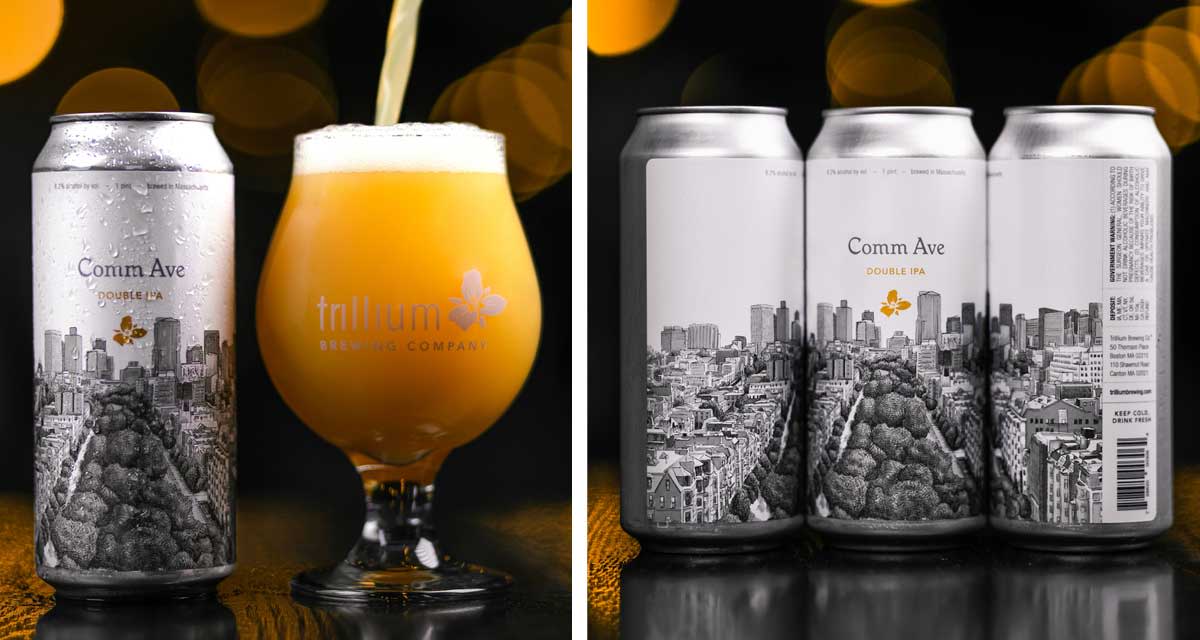 “It’s a fresh take on an old theme that we’ve been using since Day One at Trillium. One of the very first beers—and still one of the most popular beers—is Congress Street India Pale Ale. The artwork is actually an illustration of stacked tea crates that you can see down the street from the original Trillium location, in Boston’s Fort Point neighborhood. The reason you can see those tea crates on Congress Street is that that’s where the Boston Tea Party Museum is, which is actually part structure built over the water and part old wooden ship.

“From there, we decided to build upon the success of this IPA with a series and name them each after all of the streets in the Fort Point neighborhood. Beers such as Melcher Street, Summer Street, and Stillings Street quickly became some of our more popular beers. For those, the image became an illustrated map view of the neighborhood with that specific street highlighted in a blueish-green color. So, depicting Boston from the start was a big part of what we wanted to do on our can art. Four years ago, we evolved the map look to a 3D visual of the neighborhood for Trillium’s third anniversary beer, The Streets Triple IPA, where we used Google Earth as an image reference to illustrate from, which at the time was by far the most complex, detailed, and time-consuming label to date.

“Earlier this year, when we were trying to come up with a concept for this new double IPA series … the natural thought around the brewery was to finally make an Avenue Series as sort of a beefed-up take on the Street Series. To beef up the visuals of the maps, we went back to Google Earth and grabbed screenshots of our favorite avenues around the city—all from the same general height and angle—and began to mock up what these cans could look like. I knew that these were going to be a lot more detailed than most of our other labels, and there was a part of me that was excited for the challenge. But another part of me was a bit afraid that it would be impossible to get the detail in all the buildings receding into the horizon, but we set out to give it a go anyway. The first beer in this series that we did was Mass Ave, short for Massachusetts Avenue. I was correct in thinking this was going to be a beast; it ended up taking 16 hours to illustrate, when most other beers take only six to eight hours.

“Next up was the beer we’re highlighting today, Comm Ave, short for Commonwealth Avenue. This had much more detail, as the angle in which we’re looking at the city, though it was the same as Mass Ave, actually looked slightly uphill toward the capital building, and in turn put a lot more buildings into view than in the previous beer. The result was pretty excellent, though. I think some of the styling that comes out of all these tiny details in the buildings makes these couple of illustrations a little more cartoony looking than previous beers, but I’m definitely happy with the result.

“It’s a pretty collaborative process [with Trillium]. I work closely with the rest of the marketing team, and we share things around with other folks in the company to gauge their excitement. For this one, it seemed like everyone was excited to see it come to life. Initially, the group was excited just to have a beer like this in the works, and then getting into the naming, people became more excited as they could start to visualize how it could take shape in relation to past beers, including the Street Series.

“From a visual standpoint, I think the plan is to continue to evolve and push labels into new territories, which we’ve been doing a bit of over the years, using different colors, orientations … but letting that one constant thing—the cross-hatched pen and ink illustration—be the thing that is as recognizable as the Trillium flower itself. We’ve had a lot of fun over the past seven years pushing this look around, and I think there’s still plenty of room for it to grow and evolve while staying recognizable and true to the brand.” 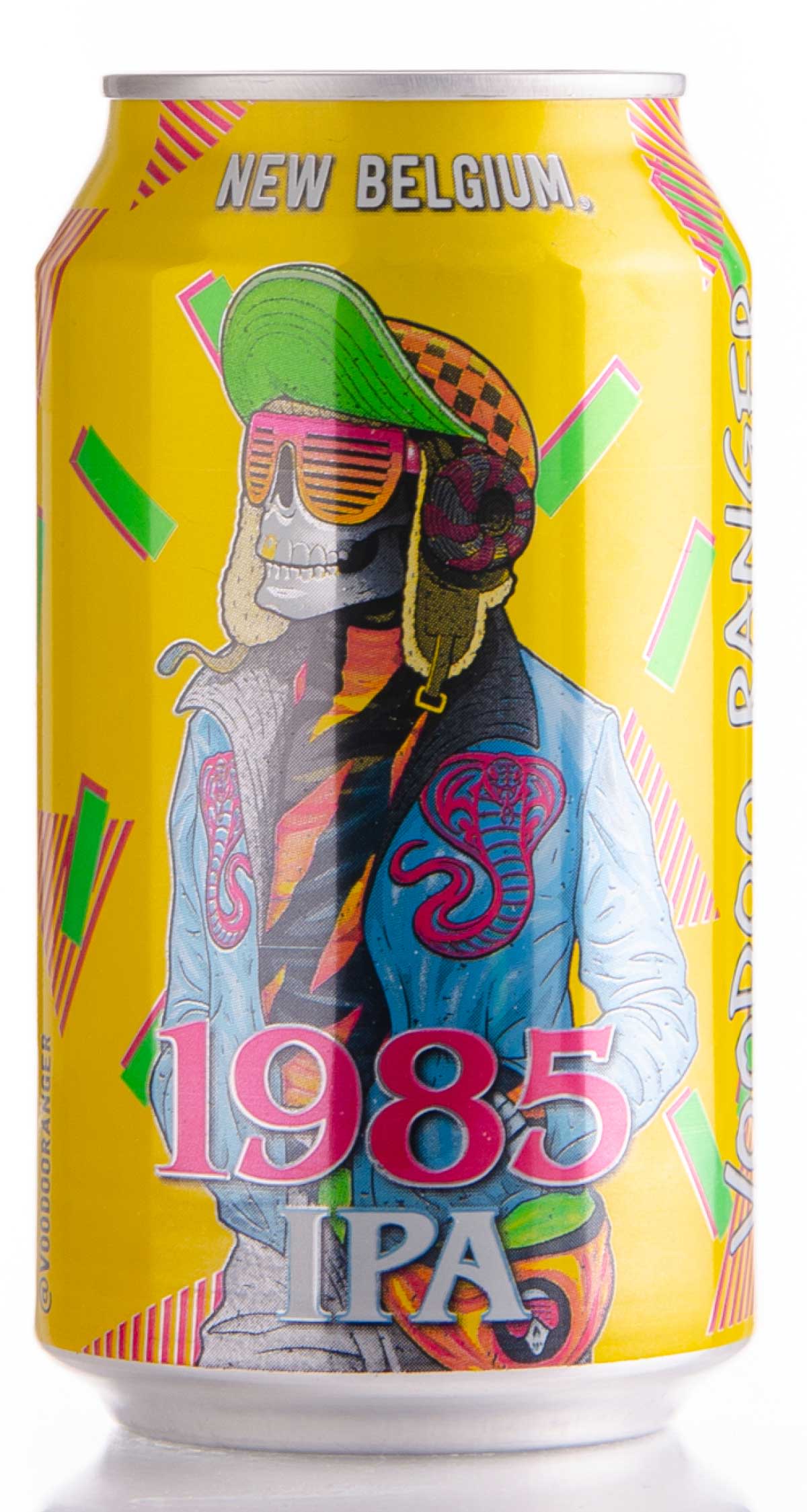 One of the most successful IPA brands of the past few years—Voodoo Ranger—took on a retro look for one of its rotational beers this year. Leah Pilcer, New Belgium’s director of public relations and digital strategy, talks about the design for Voodoo Ranger 1985 Hazy Mango IPA.

“With 1985 IPA, we wanted to bring back the fun, bright, 1980s aesthetic we all know and love by introducing bold colors, lively patterns, and fashion effects such as shutter shades and fanny packs (that totally deserve a comeback). Our design process remained focused on our goal of creating packaging that was as bright as the beer itself—a delicious hazy, mango IPA.

“Our brewers had so much fun creating this beer that we wanted to make sure that the packaging was just as fun; from Voodoo’s turtleneck and acid-washed jeans to the throwback text on our six-packs. The packaging delivers that retro ’80s vibe that catches your eye before you even take a sip of the beer.

“For this brand, we wanted to take the consumer back to the ’80s. On social content—our VR Instagram channel—you can see the character doing some really fun bits and videos taking you back to 1985. We also highlighted it on New Belgium’s site, created a microsite, and offered a collection of ’80s-themed retail for consumers to buy. Lunchboxes, 1985 Beer Flight Cobra Jacket, action figures.…

“In addition, we did something amazing from an activation standpoint to engage with consumers in Chicago during COVID. It was an activation we already had in the works but had to pivot location because of world events. We partnered with [the delivery app] MiniBar so that customers could place orders and enter for a chance to have their 1985 delivered in a DeLorean in true ’80s style.”

Whether you’re updating an aging brand or creating a fresh brand from scratch, here are some fundamental considerations for creating brands that connect with your audience.