The pandemic’s unpredictability also affects the laborers, farmers, and dealers who supply breweries’ raw ingredients. Their experience, flexibility, and optimism are helping to buffer a potentially volatile market.

John Coleman is a sixth-generation hop farmer. In 1847, his ancestors headed west from Iowa and ended up in St. Paul, a tiny town founded by Catholic missionaries in Oregon’s Willamette Valley. Starting with a small plot of land, the Colemans slowly expanded their acreage and now grow a variety of crops including hazelnuts, hemp, and vegetables, as well as about two dozen varieties of hops. Today, Coleman Agriculture is a grower-owner in the Yakima Chief Hops network and a partner of Oregon-based wholesaler Indie Hops. In fact, about 1,800 of the company’s 7,500 acres are dedicated to the perennial crop.

August was the start of the harvest for Coleman and other hop farmers across the Pacific Northwest. Typically, that means nonstop activity for the better part of eight weeks. However, this year will not be the same, as the global pandemic and the accompanying recession have complicated things for the brewing industry and its suppliers. With brewers reeling from lost draft sales and scrambling to make contingency plans for the future, growers and processors must nonetheless press ahead with their seasonal work, swiftly converting fragrant cones into firm pellets to preserve their desirable oils and acids. But to protect employees and customers from the virus, and to limit their financial exposure, farms have made changes.

“We realized that things were going to be different, and we wanted to get ahead of it,” Coleman says. “Some of the dealers asked us to take out acreage—some of the varieties with softer demand like Simcoe, Cascade, and Centennial. We also elected not to string Meridian.”

All told, Coleman says his family’s operation will harvest about 100 fewer acres this year, somewhere in the neighborhood of 5 to 6 percent of its total hop acreage. Getting those hops off the field is a labor-intensive process; managing the health and safety of a large seasonal workforce spread across five sites is another challenge. More personal protective equipment (PPE), more frequent cleaning cycles, additional toilet facilities in the field—all of these add to the cost of business, and they require monitoring to ensure compliance with worker protection regulations in Oregon and Washington. However, Coleman says that after one crew boss tested positive for COVID-19 in the spring, his employees were virus-free all summer. Nevertheless, he acknowledges that essential workers are particularly at risk and worries that an outbreak could jeopardize the end of harvest.

“[Coronavirus] has shown us that people at the lowest end are the most vulnerable,” Coleman says. “We want to make sure everybody’s healthy. That’s the number one thing.”

Even without any infections, he expects only an average yield this year, but when it comes to the big picture, Coleman remains optimistic for the future. “Farmers are pretty resilient,” he says. 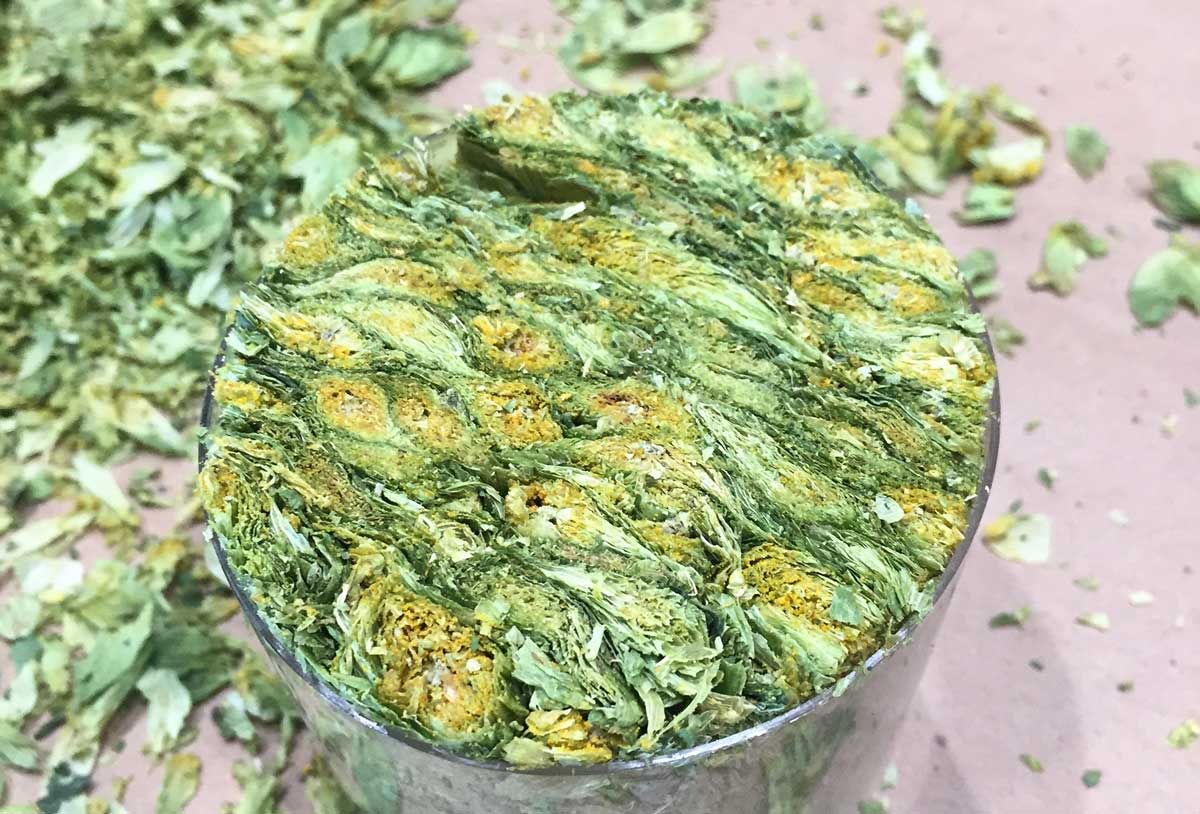 A plug from a hop bale from Mill 95 in Parma, Idaho. Photo: Courtesy Mill 95

In Partnership with Brewers.

Mill 95 is Idaho’s only hop processor. Amaya Aguirre-Landa, Mill 95’s sales and marketing associate, says that while 2020 will be trying, there is cause for hope. She points out that consumer demand for hazy IPAs and hop-forward beers hasn’t decreased and that the interest from brewers in proprietary varieties such as Citra, Mosaic, and Idaho 7 has never been higher.

“This isn’t the first downturn our partner growers have experienced,” she says. “We see the light at the end of the tunnel. You can’t work in agriculture and not be optimistic.”

Mill 95—which completed its first harvest in 2017 and works with almost all the hop farmers in the Parma area, east of the Oregon state line—launched a brewery relief program in the spring to help blunt the pandemic’s financial impact. Running from March through the end of May, the program had multiple facets: It included collaborative digital ads targeted at consumers; it offered select hop varieties and crop years at little to no cost; and, to a lesser extent, it helped furloughed brewery workers in southwestern Idaho find temporary work at Mill 95 or one of its partner growers. Aguirre-Landa says that 75 breweries took advantage of the program, and the company continues to work with others on a case-by-case basis.

“We’re a business, but we view ourselves as partners to brewers,” she says. “We always advise customers to estimate on the conservative side,” referring to hop contracts that commit brewers to specific quantities of selected varieties. “Trends can change very quickly. Our contracts do not have a fulfillment deadline, and we store that product for free until July 31 of the following year. Then [brewers] are charged a monthly rate per pallet.”

Mill 95 is still offering selection this year, but like many other things in 2020, it’s taking the experience virtual. Instead of rubbing samples in eyeshot of the hop fields where each variety was grown, interested customers will be able to order brewer’s cuts and schedule follow-up conversations by phone or video conference to discuss brewing properties and place orders. 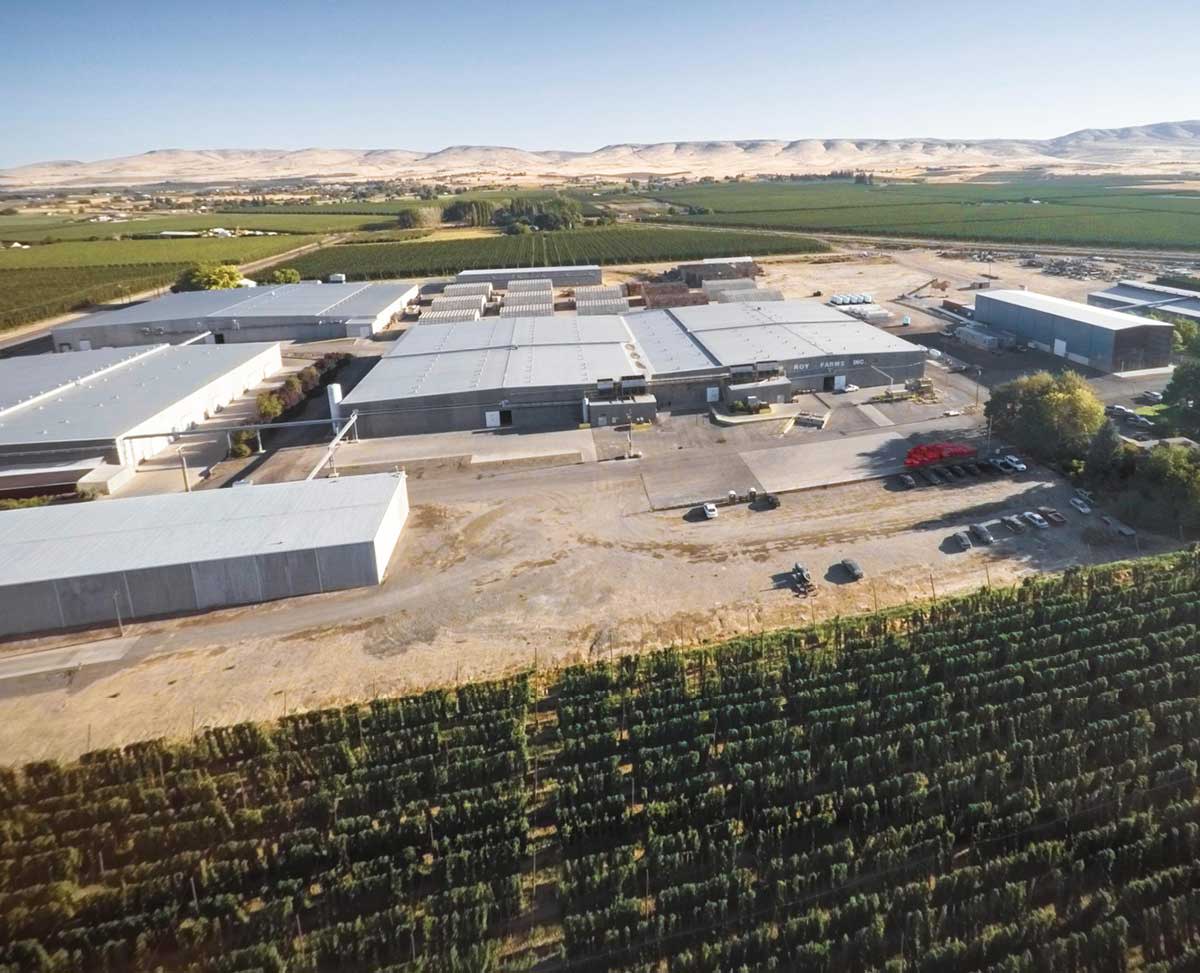 The Challenge of Uncertainty

Back in Oregon, Jim Solberg, cofounder of Indie Hops, describes the situation with his brewery customers as a mixed bag. He says that the current economic climate makes it difficult for breweries to contract for future hop harvests with any real confidence, which in turn causes both farmers and brokers such as Indie Hops to be more cautious in their own forecasts as they assume more of the risk. Generally speaking, it’s a tricky balance to strike even in the best of times. This year, that calculus might be a bit more challenging.

“We’ve always encouraged brewers to only contract for hops in amounts they’re confident they’ll be able to use,” Solberg says. “It secures their future with quality hops they’re able to select, and it helps the supply side, farms, and processors. We don’t want them to over-contract. That is as large [of] a problem for us as having no contracts.”

Meanwhile, in Washington’s Yakima Valley, Andy Roy manages accounts and contracts for his family’s fifth-generation hop farm. He says he has actually seen a recent uptick in contracting for the current crop year—in spite of the fact that some breweries are struggling to stay afloat.

“A good portion of brewers are moving ahead as planned, albeit less aggressively than they anticipated,” he says. “But they are very hesitant to commit to much past this coming harvest, which is understandable considering all the uncertainty. We also anticipate more spot purchases over contracting, which comes with its own risks. Lack of availability and/or quality could become an issue if [a brewery is] not contracted properly.”

Like Coleman Agriculture in Oregon, Roy Farms has been working closely with its partners to navigate through a year that no one could have anticipated. And like Coleman, Roy says his family’s business has adjusted acreage to account for an expected decrease in demand. He has also adjusted agreements with breweries as businesses that are strapped for cash and brewing less frequently draw on contracted inventory less frequently and in smaller amounts. At the same time, he says that quite a few breweries are brewing more than in the recent past. Whatever long-term effects the pandemic might have on the business of beer, Roy believes that repercussions are a certainty.

“There will most definitely be a market imbalance due to market share and brand shifts,” Roy says. “We have seen consumers lean into tried-and-true brands more commonly sold in grocery and [convenience stores]. Having on-premise and draft [sales] restricted will most likely cause brewers to be hesitant to push newer brands, and [will lead to] less experimentation, due to the resources and time needed. This trickles down to the hop suppliers with less volume contracted … and more risk to play around with experimental varieties. The sad part is, most breweries were just beginning to finally rebound from over-contracting, and this is just going to exacerbate and delay them from seeing the light at the end of the tunnel.” 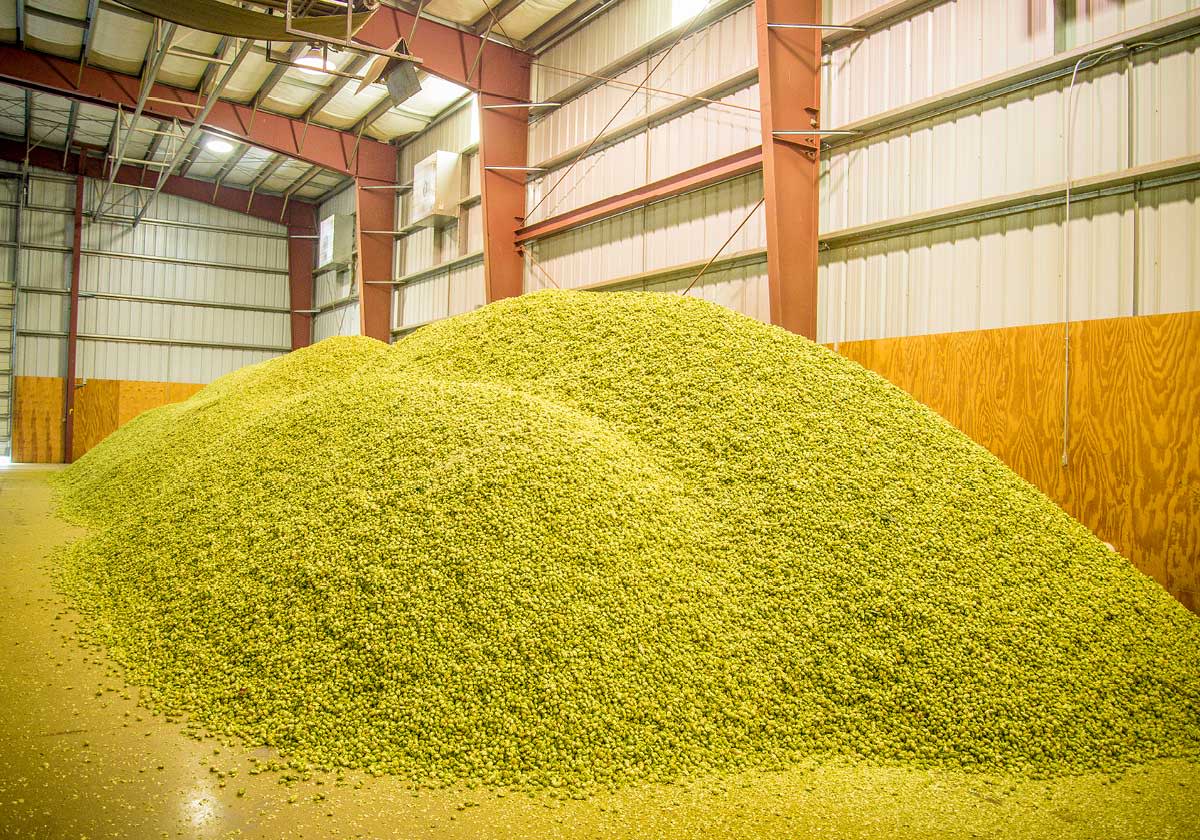 Blake Crosby, president and CEO of Crosby Hops in Woodburn, Oregon, is also expecting some turmoil on the horizon, but he’s not predicting doom and gloom.

“With COVID-19, it’s likely there will be more market volatility,” Crosby says. “That’s what we know for sure. However, that’s pretty typical in hops, so most brewers get that. It’s a major reason contracts with quality providers are so important. This crisis will also further reinforce the importance of having a hop partner that is willing and able to flex with the demands of your brewery.”

Crosby says that as 2020 has progressed, his business has adjusted delivery volumes and continues to operate with flexibility and nimbleness—two qualities that have historically contributed to its success. He says that a high level of communication has been important, too, along with a recognition that getting through a demanding year such as this one requires farmers, brokers, and brewers to work together toward mutually beneficial solutions. It’s an attitude shared by growers across the Northwest—growers who understand that the relationship between buyers and sellers is symbiotic. This fact, and the broader growth of the brewing industry in the past decade, is reassuring to Crosby.

“Overall, we are really optimistic about craft long term,” he says. “As the industry gets through this, it will be harder for critics to say the craft bubble is going to burst or that the demand is unsustainable or fleeting. If anything, these tough times are proving that craft is core to the consumption habits of many quality-focused consumers, and that gives us confidence for the future.”

The Beer Glass IS Half-Full

John Coleman, preparing for his busiest months of the year while waiting to find out whether he’ll have enough healthy farmworkers to get through harvest, has his concerns, but he tries to stay positive—no easy feat in the middle of a pandemic.

“We’re attempting to rise to the challenge,” he says, matter-of-factly. “We’re just going to have to figure out how to work through this. At the end of the day, it’s only brewers [who] buy hops. The hop market has been kind to growers, so we’re in a better position to go forward with this uncertainty.”

In the world of hop farming, it seems, a climbing bine lifts all hopes.

Author of The Great Northeast Brewery Tour, a contributor to The Oxford Companion to Beer, and former editor of BeerAdvocate, Ben Keene has judged beer competitions across the US and has spoken at industry conferences and conventions. He lives in Seattle.

Labor Day windstorms damage up to 5 percent of Yakima Chief’s remaining crop in Washington and Idaho, with the response complicated by wildfires and apple harvest.