What’s It Worth? Determining the Value of Your Brewery

You know how much money you have in your checking account. As a brewery owner, you also need to know the value of your business.

As a brewery owner, you have your hands full brewing exceptional beer, making payroll, dealing with regulators, evaluating the hops/malt crop, fixing the canning line, scheduling taproom activities, cleaning tanks, filling out TTB forms ... the list is practically endless. With so many issues vying for attention, buying out the interests of a partner who suddenly died, buying out a spouse’s interest in a divorce, dealing with investors who want an exit, or fighting a shareholder oppression suit don’t factor into what has to be done today.

In a rare moment of breathing space, you may have thought of transitioning brewery ownership via an ESOP (employee stock ownership plan) or by gifting shares to your children (or a foundation). You may want to compensate key managers with company stock, stock options, or incentive units. Maybe you need to raise capital through additional debt or a new round of equity. Finally, you may want to be proactive and know what your brewery is worth in case a private equity group shows up in the parking lot with a term sheet.

Every one of these situations requires a determination of the value of your brewery. But what exactly does a valuation look like? This article aims to answer that question using a case-study valuation of an actual operating brewery in the United States, which we’ll call SmallBrewCo.

Before embarking on a valuation, you need to consider two important issues.

First, hire an appraiser who specializes in valuation.

In our industry, we see a fair number of dabblers—people who perform two or three appraisals each year. Hiring an appraiser with that kind of experience base would be equivalent to hiring a guy who drinks a few IPAs at Christmas to be your master brewer. When it’s time to value your business, use an appraiser who spends 100 percent of his/her time on valuation.

To ensure that you don’t wind up paying for a second valuation … or worse, make sure of the following:

Second, decide what you need.

Valuations are not line-priced, and their cost depends on complexity and reporting requirements. Think of it this way: you can brew an IPA batch in a day. A lager might take a few weeks, while a barrel-aged sour could take eighteen months. Appraisals work the same way.

If you need only an annual update for internal planning purposes, get a calculation of value, which has a cover letter and an accompanying set of tables showing how the value was calculated. If an external party—say the IRS, the SBA, or your audit firm—will be reviewing the results, you’ll have to go with a full narrative report. Complex projects (such as purchase-price allocations, solvency opinions, and incentive-unit valuations) take longer and cost more because they require more work. Define the scope of your valuation engagement with your appraiser before (s)he starts so that you pay only for what you need.

With the preliminaries handled, let’s turn to the case study.

Background
SmallBrewCo has operated in Smalltown for the past five years and provides a livelihood to twenty-seven people. SmallBrewCo has a 15-barrel system with annual capacity of 4.5K barrels. SmallBrewCo sells 20 percent of its volume in the taproom, 52 percent via self-distribution to 120 restaurants and bars in the Smalltown area, and 28 percent to a distributor in the large metro area an hour north of Smalltown. SmallBrewCo also sells branded merchandise in the taproom. SmallBrewCo—a strong believer in having visible core brands to create a strong consumer franchise—brews ales, stouts, IPAs, and recurring seasonal items; it has brewed more than 100 individual beers since it was founded. SmallBrewCo currently packages its beers into kegs and 22-ounce bombers and plans to expand into 12-ounce bottles.

Due Diligence
This first phase of the valuation is both quantitative and qualitative. The quantitative work focuses on a detailed review of the brewery’s historical financial statements and metrics related to liquidity, profitability, leverage, performance, and growth.

The qualitative work is where your appraiser masters the details of your business: history, operations (product line-up, packaging configurations, the brewing system and process), suppliers, customers, the sales/marketing process, the management team, and employees. (S)he must also understand external factors (competitive environment, government regulations, industry, economy) and their impact on the business.

The last task in this phase is for your appraiser to pull all the elements together into the strategic big picture by understanding your value proposition (what customers you’re going after with what products and at what relative price) and your value chain (the sequence of discrete economic processes you perform to create, produce, sell, deliver, and support the products you sell). 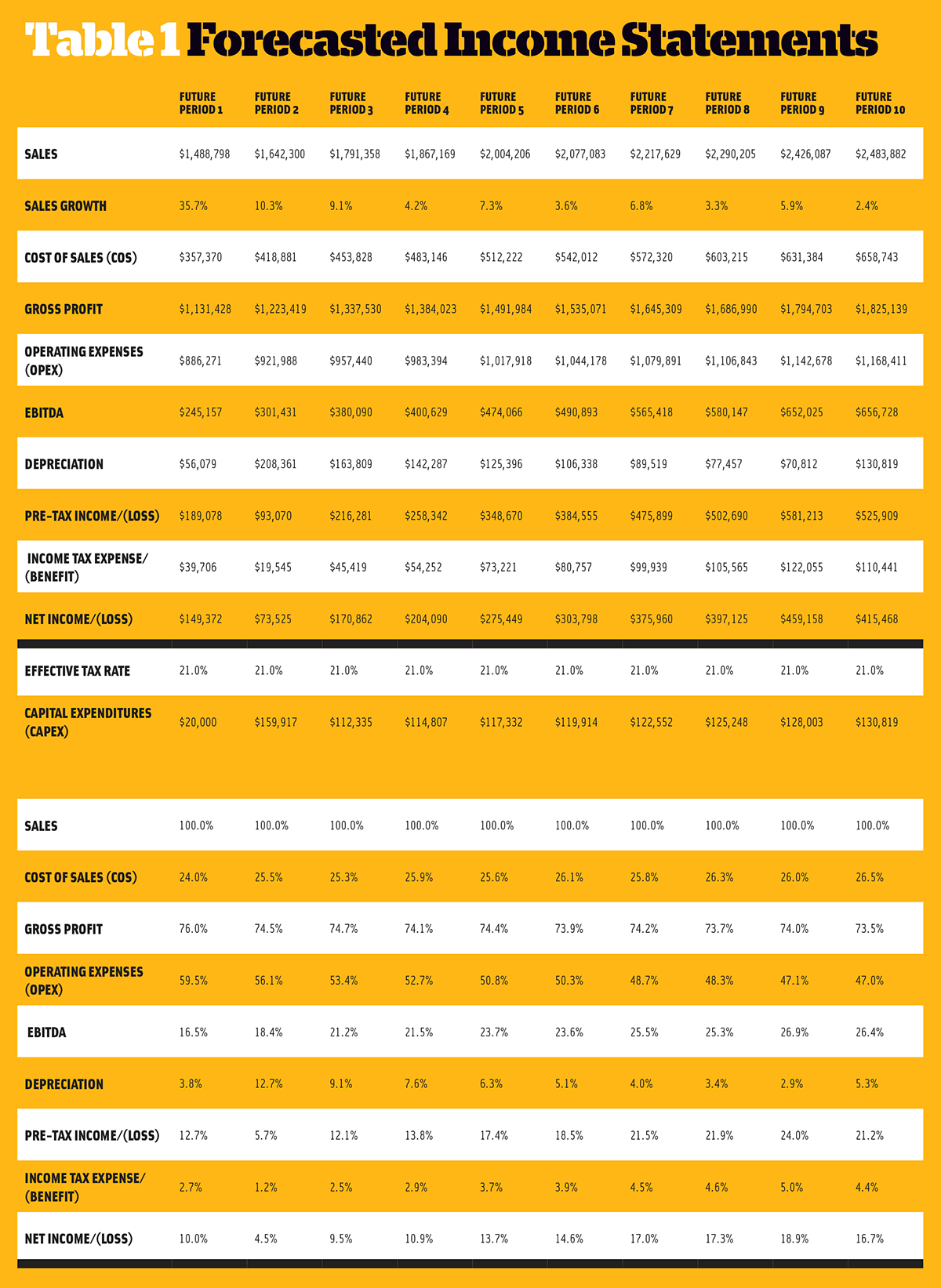 For SmallBrewCo, we first forecasted the income statement items: sales, cost of sales (COS), and operating expenses (opex).

The key sales driver was volume from bottles and from kegs. We forecasted volumes for the 22-ounce bombers (direct and distributor), the new 12-ounce bottles (distributor only), and the taproom. We then applied pricing appropriate to the volumes (e.g., distributor dollar sales were 70 percent of direct-distribution dollar sales) and factored in occasional price increases.

COS was based on historical margins.

For opex, we identified which components were fixed and grow with inflation and which varied with sales. Depreciation was tax-basis. We also forecasted the balance-sheet items (capital expenditures and change in working capital), which we’ll see later in the cash-flow forecast. Table 1 shows the forecasted income statement.

It’s important to understand that an income statement is not a cash-flow statement. Cash flow—not net income—is what gets valued.

The Cost of Capital
Contrary to the classic Dire Straits tune, you don’t get “money for nothing.” Debt (e.g., a term loan or a revolving line of credit) has a cost expressed as an interest rate. Equity has a cost as well. You have to pay equity investors (and that includes yourself) for the use of their money. By putting equity in SmallBrewCo, investors incur an opportunity cost because they could use those funds to make another, potentially less risky investment.

We used a modified Capital Asset Pricing Model (CAPM) to determine SmallBrewCo’s cost of equity. Without getting too much into the weeds, the modified CAPM uses five inputs:

We also determined a market cost of debt for SmallBrewCo using a public market proxy. We then derived a weighted average cost of capital (WACC) for SmallBrewCo of 14.1 percent.

The Discounted Cash Flow The discounted cash flow (DCF) is the fermentation tank of the valuation process. At the end of the day, investors in a brewery/business expect their investment to return cash flow that, over time, exceeds the amount initially invested.

Net income and depreciation come from the forecasted income statement. Working capital (current assets less cash less non-interest-bearing current liabilities) generally increases with sales, so it’s a use of cash. Same for capex: when you buy that next bright tank, it’s a cash outflow. Depreciation is a “recapture” of the cash flow over the useful life of that asset; it also provides a tax shield. We determined SmallBrewCo’s cash flow over a 10-year period, since that’s about how long it would take to reach a steady-state volume.

We then added a terminal value (the value of the cash flows in all future years, assuming the business keeps going). Since SmallBrewCo doesn’t have capacity beyond Year 10, our terminal growth only included price increases.

After discounting, we added up the cash flows to arrive at Invested Capital (IC) value (IC is debt plus equity). We then added back excess cash and working capital and subtracted debt to get to the equity value, as shown in Table 2. 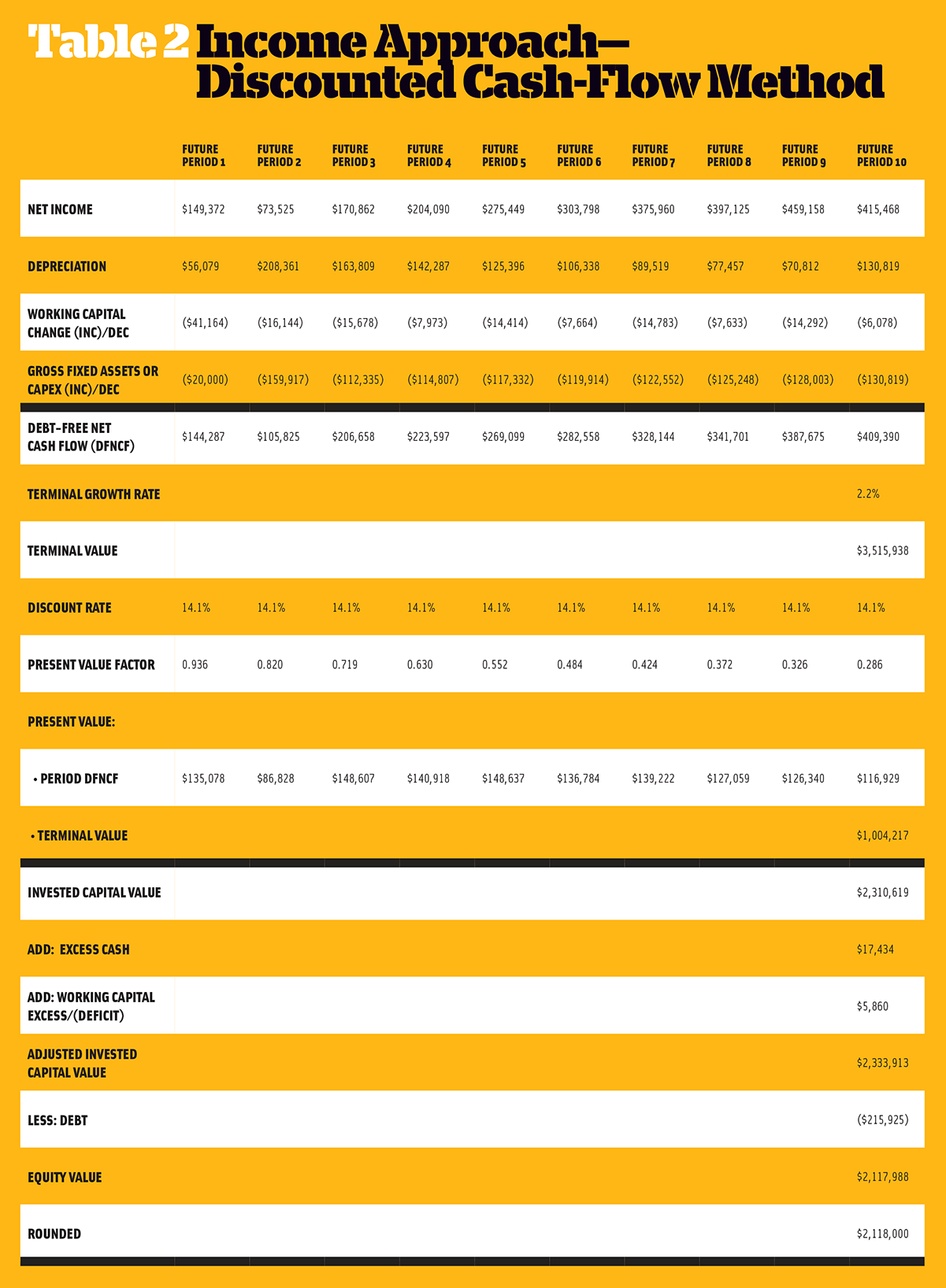 Were this a full-fledged valuation, we’d present the results of the market approach using guideline companies (comparing SmallBrewCo to publicly traded companies) and M&A (merger and acquisition) transactions. We might have to apply a control discount and a marketability discount. Those individual value indications would then be weighted and a final value concluded.

The reasons mentioned at the beginning of this article are all valid reasons for having your business professionally appraised. But the most compelling reason is that your brewery is not just homebrewing writ large: it’s your business.

What’s It Worth? Determining the Value of Your Brewery, Part II

In this case study, David Butler looks at the valuation of a large (~18K bbl) operation with a distribution + taproom model, and explains the valuation process in detail.