The times, they are a-changin’. Gone is the old startup mantra of “plan big for growth,” replaced by a lean “test the concept and grow with demand” philosophy. That's pushing equipment manufacturers toward innovative, scalable solutions.

When a brewery in planning asked a successful craft brewer for startup advice in 2014 or 2015, it was common to hear an answer such as, “Buy a larger brewhouse than you think you need, so that you won’t have to install a new one 18 months down the road.” Such answers seem quaint today, when explosive growth is more exception than rule. Instead, breweries launching and growing today are seeking more stable, iterative approaches to growth: growing in place, designing systems in modular ways that allow for incremental upgrades rather than wholesale replacements, and finding solutions that accommodate future growth with limited downtime.

To reflect on these shifts, we asked some of the major manufacturers in the brewhouse-equipment space for their thoughts on a variety of topics. We have compiled this overview of solutions and predictions to explain where we are today and where the world of brewhouse equipment is going over the next year.

Small Is the New Big

As competition in the brewing industry increases, opportunities are shrinking. The production dream of building a brand that can sell 30,000, 50,000, or 100,000 barrels per year is all but gone; the vast majority of today’s brewery operators have much more modest sales goals. Yet despite lower volume expectations, goals for high quality remain the same. There are no “passes” on quality for smaller breweries. Manufacturers are seizing on that demand for quality by building small systems that allow for the same level of detail and control as larger production-oriented brewhouses.

“Our one-barrel system is, by far, our Number 1 selling brewhouse, by number of units sold,” says Michael Fabian of Ss Brewtech. “And, of course, it comes down to so many nanobreweries starting up. We’re selling more and more to breweries in rural areas where there may not be enough population to support a much larger brewhouse, or the owner of the business doesn’t have any aspirations to do any sort of distribution, and they’re just looking to serve their beer over their own counter. That movement has been amazing, and it’s been a real privilege to help those small breweries get off the ground.”

New brewing systems are on offer this year from a variety of manufacturers—Blichmann Engineering, Spike Brewing, Ruby Street Brewing, Ss Brewtech, and others are all bringing newly engineered nano-scale systems to the market.

But the nano focus isn’t limited to brewing and cellar gear. Canning-equipment manufacturers such as Twin Monkeys, Wild Goose, Cask, and others have been focused on scaling down the technology from their higher-volume automated lines to give smaller brewers a high-quality but cost-effective way to can.

“Nanobreweries want to can, and they care intensely about the quality,” says Amanda Ladas of Twin Monkeys. “We designed our smallest machine with the craft nanobrewer in mind. It uses all the same components as our other systems but offers a more realistic price tag for the smaller producer. This machine does it all—slim, sleek, standard cans, and crowlers—giving that nanobrewer so much flexibility.”

Growth at this nano scale isn’t just coming from startups, either.

“Many of our production-brewery clients are opening additional taprooms with brewhouses, but at a nano scale and in other cities,” says Amanda Podwinski of ABE Beverage Equipment.

This new trend of high quality at small scale makes it easier than ever for brewers to start small and grow with revenue and demand.

From brewhouse to cellar to packaging, brewers have grown increasingly savvy about designs and systems that allow for upgrading in place. Manufacturers have been happy to oblige. From brewhouses designed from the start for additional vessels to canning lines designed to accommodate additional fill heads, the new focus is on facilitating incremental growth through smaller upgrades. Having a clear roadmap for expansion (if necessary), and minimizing downtime during upgrade cycles, has grown increasingly important.

“Many breweries are looking for something that will work smarter and not make them work harder,” says Twin Monkeys’ Ladas. “When a brewer needs more capacity, they don’t want to deal with selling an older piece of equipment and worrying about how to pay for a new one or talking to banks or leasing firms trying to secure funding.”

With the resale market stumbling a bit, lenders and financers are lowering their risk tolerance in the brewing world. Systems designed to grow with the brewery through smaller (and reasonably priced) upgrades are naturally more attractive than non-modular systems. At the same time, manufacturers have to focus on backward compatibility to assure new customers today that this large investment will continue to be supported and won’t just become a technical dinosaur.

“It’s been a big strategy for us to not just leave some of the legacy crowd—the ones who invested in us early—out in the cold,” Ss Brewtech’s Fabian says. “They’re able to bolt on some of our new tech and leverage that as well. Something we do with every brewhouse now is plan for future additions. For example, a grist case may not be in the plans for a brewery right now, but we’ve made everything grist-case ready, so that even if someone decides to open a brewery, and later they move to a new location with more clearance that allows them to now have a grist case, they can call us up and order it after the fact. Before, it was a big deal—they’d have to get a welder out there to weld the tabs on, and line it up. So, we’ve made progress in trying to standardize as many options as possible, and for the options that we couldn’t standardize, we’ve made the brewhouse ready for them.”

From canning lines that allow for additional fill heads or a second lane to small brewhouses with the same controls and metering as their larger counterparts, scalability and upgradeability are two principles that brewery operators are looking for now more than ever.

While advanced controls were once only available to the top of the market, technology has trickled down over time, and more integrated systems are finding their way to smaller and smaller brewhouses.

“Brewers are looking for high-end controls and advanced capabilities with a low price point,” says Michael McAdoo, general manager of ABS Commercial. “We continue to work on advancing our technology through available platforms with Rockwell/Allen Bradley and economical in-house solutions.”

Demand for more sophisticated systems combined with the ability for manufacturers to amortize development costs across wider product lines and sinking prices for component parts have led to a perfect storm of affordable monitoring and control systems—technology that allows small brewers to observe and control more parameters of the brewing process. It’s not about creating fully automated brewhouses. Instead, manufacturers are selling tools that give brewers more information, so they can make better decisions as they brew.

“There have been big advances in affordability with some of these small magnetic flowmeters, so we’ve utilized them all over the system to provide a lot more information to the brewer,” Ss Brewtech’s Fabian says. “Combining the touchscreen interface with the sensor package allows our system to better report on flow, level sensing, all of that. With us, it’s never been about automation; it’s about providing the brewer with as much critical information as possible, so they have a baseline to repeat and improve their beers.”

In years past, the best brewhouse deals involved stock, off-the-shelf designs, while brewers with a vision for customized brewhouses faced long lead times and an extensive custom engineering process. With years of experience in customization under their belts, brewhouse manufacturers today are baking in more features that were previously custom options. Today’s standard brewhouse resembles custom brewhouses of the past.

“You begin to identify trends where if everyone is buying an option, it shouldn’t be an option anymore,” Fabian says. “It should just be standard.”

McAdoo agrees. “The equipment itself has been customized for savvy brewers who want to optimize their process and recipes, so we find more requests with specific tank geometry and configurations [than with brewhouse customization]. Our standard offering includes options that meet 95 percent of our customers’ needs. The biggest customizations have come from building constraints. Finding and securing good real estate that meets the needs of a brewery is more difficult these days, so customization of the equipment is necessary to make it fit in the spaces.”

Still, not every manufacturer is moving beyond the bespoke approach.

“When we initially start discussions and layouts with our breweries, expansion is always a hot topic we bring up,” ABE Beverage Equipment’s Podwinski says. “We want to save our customers time and money in the long-run, so we definitely encourage space for multi-batching tanks and packaging in the future.” 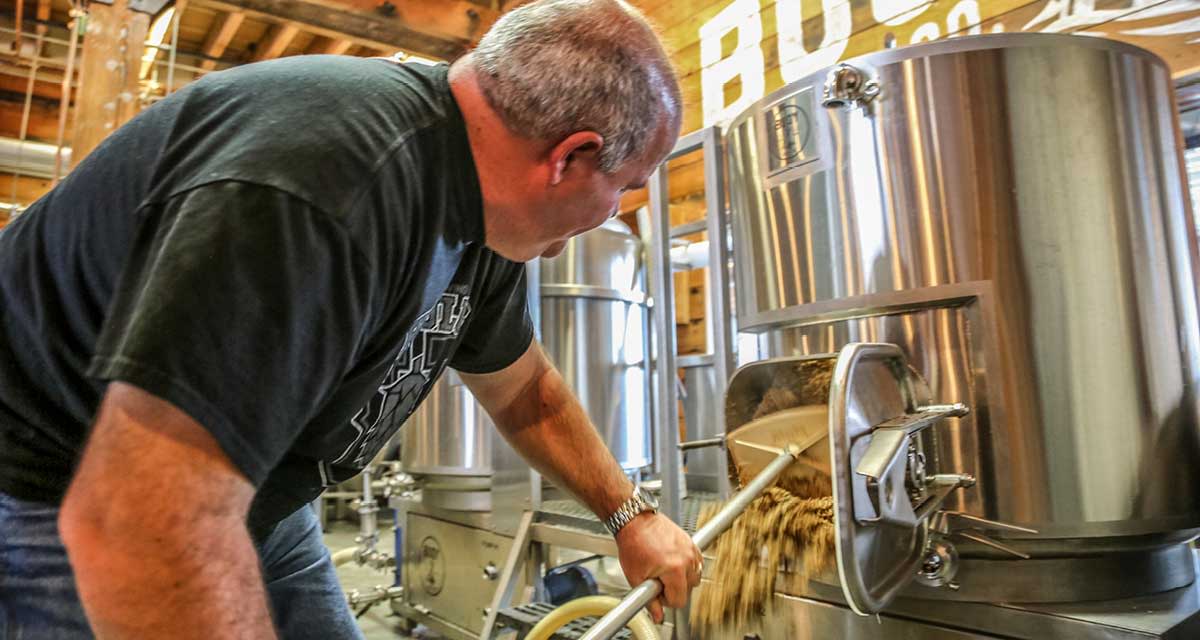 Smaller pilot and nano-scale systems like this 3.5-barrel system at Buoy Brewing in Astoria, Oregon, are on the rise for startup breweries and those opening satellite taprooms with brewhouses.

Safety and Ease of Use

One directive that brewhouse manufacturers are facing is increased demand for panels built to the UL-508A standard. Municipal codes are beginning to require control panels to meet the standard. Brewhouse-equipment manufacturers are answering the call.

“More and more local municipalities are requiring UL-508A compliance, so we had to buckle down, change some components around, and change some of the ways we were doing things to achieve this UL approval,” says Fabian. “In addition, we moved our brewhouses to a touchscreen interface this year. We developed our own in-house screen and firmware to create a better flow with how our systems are designed to operate. It makes it quite a bit simpler to use.”

User interfaces have the power to reduce mistakes in the brewhouse, but reliable and rigorous touchscreen controls have historically been too expensive for smaller-scale brewing systems. Today’s manufacturers are increasingly investing in effective design and construction.

“We are seeing a lot of our beer producers looking for the sleek can options, considering whether they want to dip their toe in that seltzer market,” Twin Monkeys’ Ladas says. “Lots of quotes going out on that after-market upgrade. Luckily, our Mancos, Gunnison, and Roaring Fork all have that option to add on later. Really it is nice to be able to let the market be custom-configured because what we have learned is that it is not one-size-fits-all.”

The other big area of growth is equipment for that most traditional of beer families: lager.

“I see more breweries looking at craft lagers as a staple of their beer lineups,” McAdoo says. “We are supplying more horizontal lagering tanks than ever before.”

“We get a lot of requests for lagering tanks,” ABE Beverage Equipment’s Podwinski says.

There are infinite ways to spend on newer, fancier, bigger, more automated, and more efficient brewhouse gear. But which upgrades get the best ROI? Here we delve into the decisions and upgrades that get better returns for breweries of varying sizes.