Change is the only constant. For Jason Spaulding of Brewery Vivant, this means looking for new avenues to explore and new spaces to open as well as constantly trying to keep up with customer demands while staying true to the company mission.

Ben Franklin is often misquoted as saying that beer was proof that God loved us and wanted us to be happy. Maybe he would have said it had he ever had the chance to visit Grand Rapids, Michigan. First-time visitors to Brewery Vivant are forgiven if they let out a little “wow” or gasp of astonishment when they walk into the pub. It is housed in a chapel that was once part of a funeral home. With its high exposed-beam ceilings, stained glass, and overall sense of reverence, it makes sense that Owner and President Jason Spaulding dedicated the brewery to French and Belgian farmhouse ales.

Evolution is an important part of beer and brewing, and at the breakneck pace that the industry is growing, the ability to adapt and roll with the times has never been more important to company survival.

Spaulding is well aware of this. He was one of the cofounders of New Holland Brewing Co. in nearby Holland, Michigan. From its opening in 1996 until 2005, he was on a rocket ship–like ride as American Craft hit its stride. Then he decided to walk away and take some time out of the industry to see what else the world had to offer.

The perspective was good, important, he says, because when he and his wife decided to launch Brewery Vivant 9 years ago, he had a clear vision of how he wanted this new brewery venture to stand out from the beginning.

So the red brick chapel made sense. The majority of breweries that have opened in the modern era here in the United States have gone into existing buildings where rent or land was cheap or into warehouses that focused on function over aesthetics.

That’s why Brewery Vivant stands out. The century-old building that now houses the 20-barrel 3-vessel W.M. Sprinkman brewhouse was an automobile garage and then livery stable. The family who owned the property also ran the largest funeral home in town, so no expense was spared.

The Spauldings could have gone elsewhere, but the building spoke to them. Working with the historical preservation commission, they restored much of the building to its former glory while also working to bring modern sustainability practices to the operation. In fact, the brewery was the first to receive LEED certification in the country.

“Internally, it means a lot to the staff,” Spaulding says. “It’s something we worked hard on, something we care deeply about and is the result of hard work paying off.”

It’s the desire to change, to update older models, and continue on an evolutionary path that led Spaulding to open a second location early this spring. This time around, he opted for the more traditional warehouse setting than a sacred space.

Broad Leaf Local Beer is a taproom with a small brewing system that speaks to the modern drinking set. Just 6 miles away from Brewery Vivant, it’s worlds apart when it comes to the setup, the vibe, and the beers.

Spaulding says this business was not in the cards when Brewery Vivant opened its doors. He was happy with the traditional beer, scratch kitchen, and working to build a business one pint at a time.

But within a few years, as the industry started its shift to taprooms, as special and limited releases became more important, and as hazy inherited the earth, he realized that he needed to transition what he was doing to incorporate the clientele that were the tail wagging the dog.

“I’m still trying to wrap my head around what happened over the past 10 years in beer, and certainly the past 5. We were observing that happening around us but were focused on Brewery Vivant.”

By 2015, he said they fell “victim to the push to grow and grow and grow.” So, they added to capacity and pushed deep into distribution. It was important to keep up with the demand but worrisome, too. Miss an order and you’ll “be replaced by someone else on the shelf in a snap.”

Still, with a capacity of 6,000 barrels, he has been happy with the growth and the ability to get beers such as Farmhand, a 5.5 percent ABV farmhouse ale, or Big Red Coq, a 6 percent hoppy red farmhouse ale, to a wider audience. Other mainstays include a wit, a bière de garde, a blonde ale, and a few wood-aged products, such as the bourbon barrel–aged quad.

Part of the Vivant growth meant taking warehouse space for extra barrels and storage, and soon enough the idea to open it to the public germinated. “But we didn’t want to re-create the chapel experience in a warehouse,” Spaulding says. “We needed to do something different, to make it look and feel different, so that we didn’t take away from Brewery Vivant’s business but could also reach new people.”

He admits that Brewery Vivant has not been immune to the chorus of people who clamored for New England–style IPAs, but all along he didn’t want to take his established brand that stood for one thing and try to shoehorn it into something else. Only a handful of breweries have been successful in that way, and rolling the dice could mean losing the base that built the brand.

Enter Broad Leaf, which “allows Vivant to be what it wants to be and what we’ve worked so hard to let it be. And we get to try something new.” On Instagram, Broad Leaf is introduced as “a hip, strangely weird cousin.” 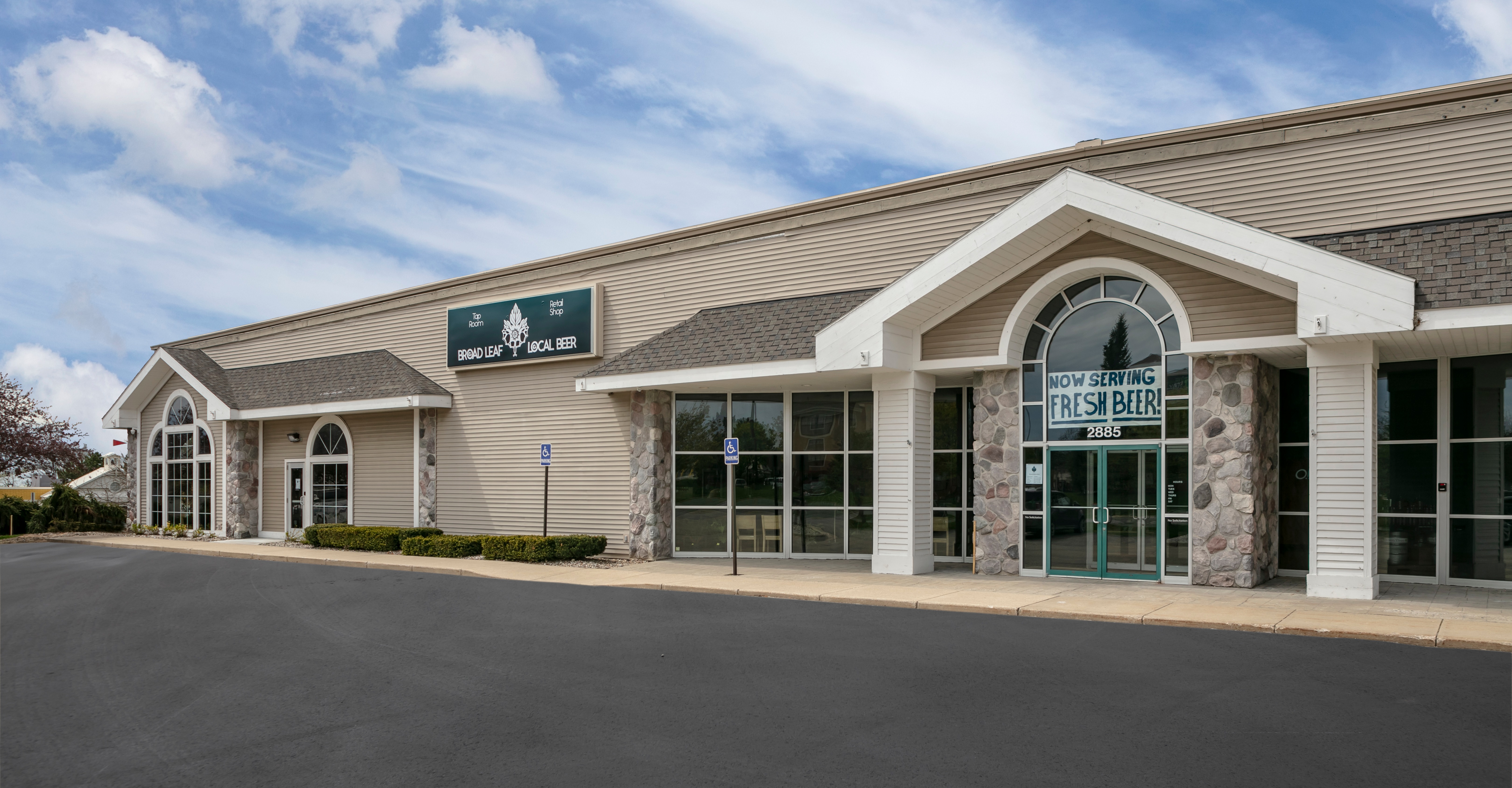 Of course, there is still the company philosophy that has found its way into the new venture. Sustainability plays a big role, although they did not chase LEED certification this time. There are a lot of reused materials, from pallets that make up the bar to shipping containers that have been fashioned into private drinking areas and kitchen space. Plus they’ve invested in energy-saving and -monitoring controls.

One thing that Spaulding says made this project possible was having the right team in place at Brewery Vivant. Having managers and a staff who care about the day-in and day-out parts of the business, who believe in the beers, the mission, and delivering the best possible experience to everyone who walks through the doors has freed him up to get the new project off the ground and to work in sync with the overall business.

In recent conversations he has the tone of a guy who has just run a marathon and is pleased with the results but knows that the race isn’t fully over.

“The big thing for me is that we have to change. My vision for Vivant was clear at the start. We picked a trajectory, we had a specific concept that I thought would be unique and stand out. And it did. But craft beer changed, so we need to keep up with that.”

He says he’s excited to learn about the new parts of the industry that didn’t exist when he first started New Holland or Vivant and to meet new brewers who bring new energy to the industry.

“There’s a whole new avenue to explore, a whole new customer base,” he says. “It’s fun, different, and a little unsettling. I thought I knew a lot, but after the last few weeks in the lead up to opening Broad Leaf, I realize that I actually don’t know that much, and I’m okay with that. This is why we do what we do—to learn, to grow. We’ve always been in it for the love of beer.”

The Importance of Brewery Customer Interaction

Breweries that are open to the pubic are more than just beer. There’s a customer relationship that develops, and making sure that public-facing employees are in sync with those in the brewhouse or kitchen is vitally important to success.