North Carolina’s Fonta Flora Brewery now operates three taprooms and a farm, as the company learns how to bridge the gap not just between urban and rural, but also between idealism and reality.

In 2017, Fonta Flora literally bought the farm. After operating a taproom brewery out of a cozy brick building in Morganton, North Carolina, for four years, Fonta Flora brewed its first batch of beer at Whippoorwill Farm, an eight-acre property the brewery purchased in the nearby hamlet of Nebo (population: roughly 3,500).

“When we started Fonta Flora, it wasn’t on a farm, but it was still more of an agricultural operation than anything else,” says cofounder Todd Steven Boera. 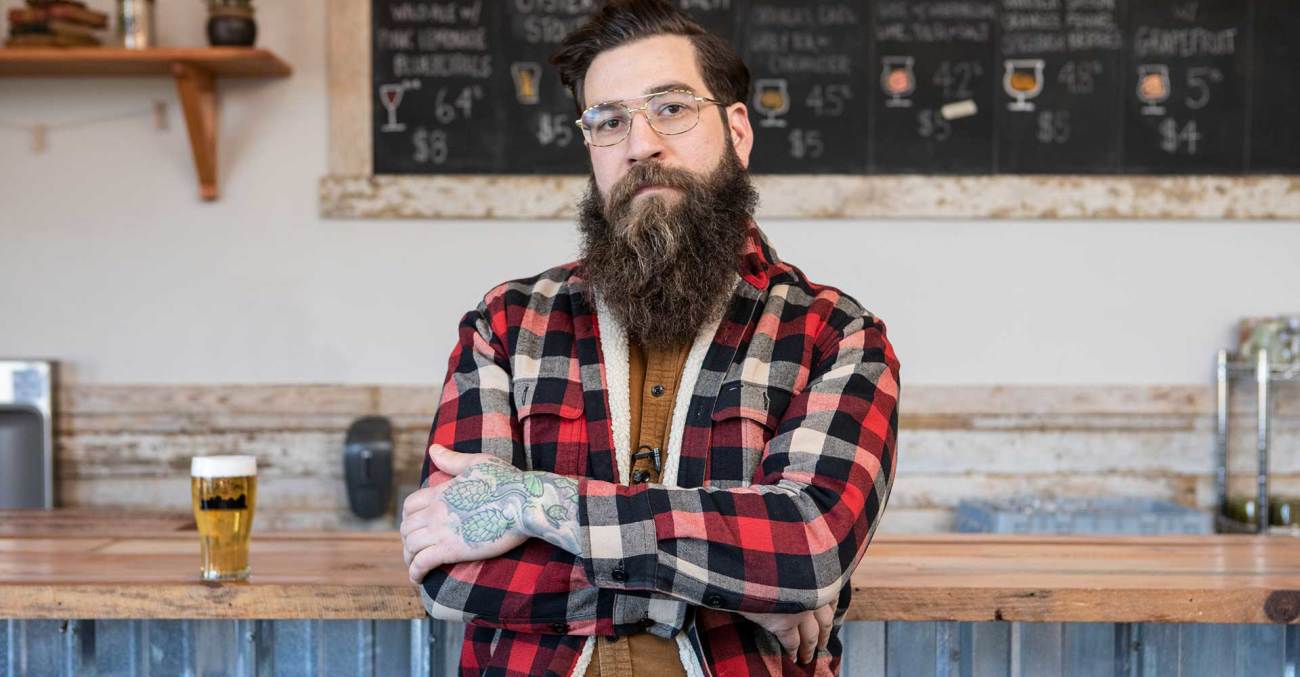 Boera’s first homebrewed batches of beer in 2006 incorporated ingredients grown in the gardens at Warren Wilson College, where he was studying agriculture. From Day One, Fonta Flora was incorporating fruit and grain from local farmers. Yet Boera longed for the brewery to have its own farm, in the vein of others such as Jester King and Hill Farmstead.

If the concept was idyllic, the business realities were not. Around 2017, about when Fonta Flora started brewing at Whippoorwill Farm, Boera says he noticed that the previously high demand for Fonta Flora’s releases of wild ales and clean saisons was dropping off. Lines of hundreds of people snaking around the brewery on release days “had essentially disappeared overnight,” he says. Whether it was the popularity of hazy IPAs and pastry stouts that replaced those styles in drinkers’ minds, or whether it was some other trend shift, Boera says that moment was “a huge wake-up call” for him.

“I really thought that we would come out here [to Whippoorwill] and make 30-barrel batches of Beets, Rhymes, and Life and sell 60 half-barrels of this beet saison, no problem,” Boera says. “It turns out, that’s not the way that it works.”

The farm brewery finally had its farm—but would drinkers care? The next four years would teach Fonta Flora how to balance the brewery’s mission and values with marketplace realities—and how to bridge the rural-urban divide. 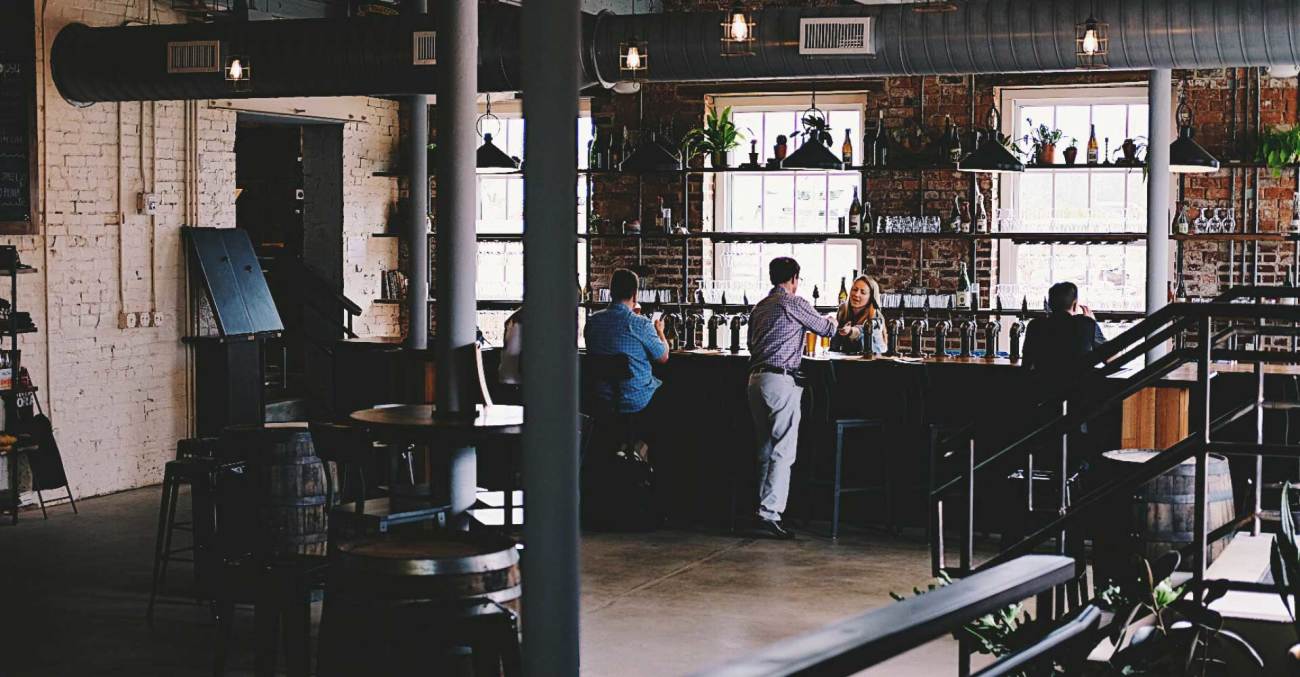 In February 2020, Fonta Flora tried something new: a taproom location in Optimist Hall, a new food hall in Charlotte, about a 90-minute drive from Morganton. “The joke we tell is that we finally decided we wanted to open a tasting room where humans exist,” Boera says.

There is truth to the joke. Taprooms are where breweries make their best margins, and Boera knew from talking to visitors at the Morganton taproom that many drove from Charlotte for special beer releases. Optimist Hall—in a former gingham textile mill a quarter mile from a light-rail station—offered a ready-made opportunity to get into the fast-growing city: Charlotte’s population grew about 20 percent between 2010 and 2020, to 2.66 million residents.

The Charlotte outpost is far removed, geographically and culturally, from Fonta Flora’s rural roots. Its location in a food hall means that many visitors stumble upon it nearly by accident. Bartenders there convey to Boera that explaining Fonta Flora’s ethos to drinkers who just want a pint to go with their food or to sip while they shop can be a challenge. Yet the feedback loop goes both ways: While the Charlotte taproom is a chance to introduce Fonta Flora’s beer and philosophy to more drinkers, it’s also a chance to hear about what drinkers want from the brewery.

“Now more than ever, we let our bar managers and our sales and distribution team drive a lot of the conversations about what gets brewed,” Boera says. “Having the Charlotte outpost has a different demographic of people that we get feedback from.”

Hazy IPAs are a good example. Despite having pledged for years never to brew one, Fonta Flora couldn’t ignore drinkers—many of them in Charlotte—who kept asking for craft beer’s most popular style. Finally, in 2021, the brewery released a series of imperial hazy IPAs cheekily named We’ve Changed, You’ve Changed, and They’ve Changed.

“We said we were never going to do this, and it turns out I was far more in my head about, ‘What will the response be? Will people ridicule us for going back on our word?’” Boera says. “People were fine with it. They were stoked.”

Boera still maintains that drinkers will never see a milkshake IPA or fruited kettle sour from Fonta Flora, but he’s more open to brewing styles beyond the classic saisons and wild ales that once defined the brewery. As long as they can incorporate locally grown grain, fruit, nuts, or other ingredients, they’re still true to the brewery’s mission. (Even the brewery’s Topsy line of hard seltzers incorporates fruit, herbs, and tea grown in the Carolinas.) A local supply chain, seasonal ingredients, and doing right by employees is ultimately a more noble goal than ignoring hazy IPA. 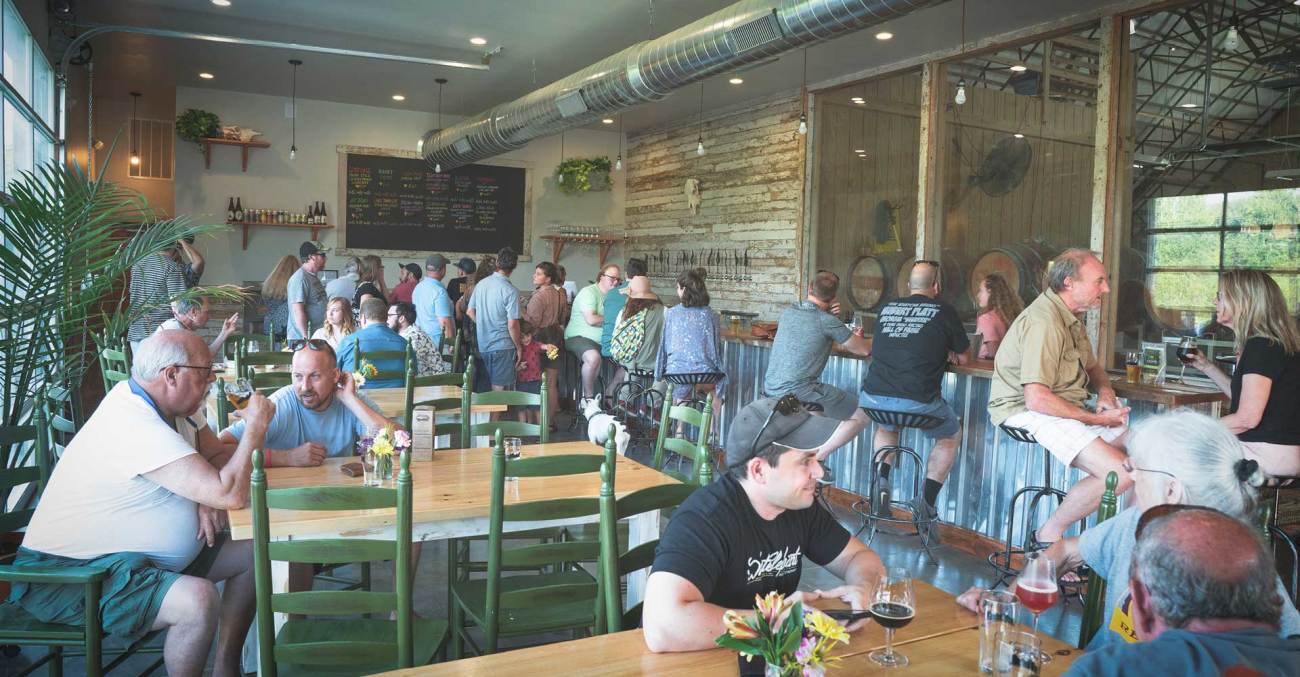 Fonta Flora appears to have figured out its brewing philosophy, but it’s still finessing the details of operating three separate locations: its tasting room in Morganton; a production brewery, taproom, and farm in Nebo; and the food-hall tasting room in Charlotte.

The first two locations share staff and are geographically closer to each other. At times, Boera says, it’s been difficult to find ways to incorporate the Charlotte employees into the larger Fonta Flora family. While the other employees might meet up for mountain biking on their days off, bringing Charlotte staff into the fold requires more deliberate efforts.

“That’s something we struggle with,” Boera says, “trying to figure out how to not just operate a standalone business in Charlotte and demonstrate that it is all part of the same community, so it doesn’t feel to our staff that ‘Oh they’re just here [in Charlotte] as a cash grab.’”

It can also be challenging to introduce visitors who’ve driven to Whippoorwill Farm from Raleigh or Charlotte to the purpose and realities of the farm. It’s not just a pretty location for a taproom; it provides some of the brewery’s ingredients.

“I think that there are plenty of people who know what we do, the types of beer that we make, or our philosophy and moral compass behind what we purchase and how we go about crafting these beers,” Boera says. “But I don’t necessarily think we’re getting people flocking to us because we make beer with local ingredients.”

However, the farm’s photogenic grounds—black dye sunflowers, corn stalks, marigold flowers, rustic wood pallets—are an undeniable draw for city residents looking for a rustic escape (and cute selfie backgrounds). Fonta Flora leans into the farm’s desirable aesthetics, but it also tries to connect those objects directly to what’s in the glass. It’s a slow process and one that happens on a person-to-person level, one pint and pawpaw fruit at a time. But when the lightbulb goes off, it’s a bright one.

“Being able to see and touch a pawpaw tree while drinking that beer is the most meaningful relationship you could have with a food product,” Boera says.

From left: The outdoor patio of the urban taproom. Plants and books set the mood. Photos: Leo Solis

The past four years have presented Fonta Flora with new realities and growing pains. Yet if the business can learn from those, it may crack the code for future success in its home state.

“North Carolina is the most rural-urban state in the country,” says Rich Greene, the former director of the North Carolina Craft Brewers Guild, who retired in January 2021. He means that the state’s growing population is spread across both urban centers and rural communities. The latter often champion their local breweries in a way that even big-city beer fans can’t match.

“When you look at a small brewery that has a very specific niche and they work on expanding that universe of raving fan customers, that is an excellent model for profitability,” Greene says. “Along the lines of creating relevance and raving fans, I think Todd has found a niche that plays exactly to that.”

Fonta Flora found its home in farmhouse-inspired beers, made with local ingredients, and brewed by people who care deeply about the land—whether that beer is served on a farm in Nebo or in a former factory in Charlotte.

Even while contemplating business reality, it’s hard for Boera not to wax a bit poetic about the farm that’s at the beating heart of it. Boera had been riding his bike past that farm for years until, one day, he saw a “For Sale” sign staked into the dirt. To hear him tell it—even though the transaction to buy Whippoorwill almost fell through—the farm had already made itself a part of Fonta Flora.

“I would come walk this land even before the deal officially closed and knew that this was just where we’re supposed to be,” he says. “I haven’t had feelings like that about much in life.”

From left: A server pours from the wrought-iron tap handles. Photo: Brandon Thrower; Old buildings and silos on the farm. Photo: Jamie Bogner

For more from Todd Boera on spontaneous fermentation, brewing with unusual local ingredients, and more, listen to Episode 68 of the Craft Beer & Brewing Magazine® podcast.
beerandbrewing.com/podcasts

Leveraging Local: Craft Malt as a Path to Success & Sustainability

Quality, price, and scalability remain drawbacks for small-batch local malt, but many small breweries argue that the benefits far outweigh the costs.