Imperial Western Beer Company, inside Union Station, has restored the space to its former glory and is encouraging commuters to take a little time to stop for a beer and slow down from the hectic pace of commuting life.

Union Station in Los Angeles serves more than 36 million passengers annually, making it the busiest transit hub west of the Mississippi River. The very nature of a train station means that people are in a hurry, trying to get from one place to the other, and with the exception of delays, there’s usually not much incentive for the average citizen to just hang out.

Just off the main concourse, however, is a place that is encouraging travelers and locals alike to stop in, take a load off, and soak in the atmosphere of the stunningly beautiful architectural marvel—all while having a pint. The Imperial Western Beer Company opened in an 11,000-square-foot space in the station a few months ago after a few years of planning and restoration work. The name pays homage to the famed train line, and the space feels like a return to the golden era of train travel.

The space is restored to its architectural glory dating back to its 1939 construction, and new visitors are usually unable to contain the “wow!” that escapes from their lips at first sight: a cathedral-height celling, stylish leather seating, a kiosk-inspired bar as the centerpiece, and everywhere joyous little touches, such as a shuffleboard table.

Throughout, there are signs of Mission Revival architecture, Art Deco, and Streamline Moderne. The floor of the brewery is done in a tile mosaic that resembles a Navajo blanket.

The minimalistic signage that exists (more on that later) to lure people in promotes fresh beer and fresh oysters, again not something that most associate with a train station, much in the same way motorists avoid gas-station sushi. The Los Angeles–based company behind Imperial Western, however, is not new to dining experiences and knows how to deliver memorable ones. The group, 213 Hospitality, has restored other historic buildings or created concepts with a sense of place that conjure thoughts of the past. The group also runs Arts District Brewing Co. in the city.

Cedd Moses, the head of 213 Hospitality, calls Imperial Western his “love letter to the city of Los Angeles.”

There are traditional menu items, such as burgers and brunch, which are seemingly more in line with a brewery setting, but the quick nature of oysters, a quick snack paired with a pint (or anything else from the full bar) before boarding a train seems in line with the setting.

So it would be easy to think that the clientele that stops into this 400-seat space would spend more time looking at their watches than settling in for a proper visit, as they might do at another brewery, but Head Brewer Devon Randall says, “the things that have proven to be challenging are not necessarily our guests. We have regulars, and while there is a transient group of people who come through here, most aren’t in a rush, we’ve found.”

Instead, the challenges have been incorporating a modern facility into a historic space, helping service staff navigate around the existing architecture in an efficient way, and making sure the overall vibe and look of the room isn’t disturbed with the necessary technology it takes to run a restaurant.

The whole space, which was once a Harvey House restaurant, is split between the consumer-facing space and the back of the house for the kitchen and brewery. That back-of-the-house space is 6,000 square-feet, and Randall says it wouldn’t make sense to have just a kitchen space that is bigger than the service area, so that’s why a brewery made sense. They installed a Premier Stainless Systems 15-barrel system, one similar to the brewhouse used at Arts District, but because of the layout of the building, the brewery had to be fit into the existing space, with little demolition and new construction allowed.

“The grist case is downstairs, and spent grain is stored all the way in the parking lot where the Metro picks up passengers,” says Randall. “I get to drive a forklift a half mile to a mile every day. We had to get creative to make things fit.” 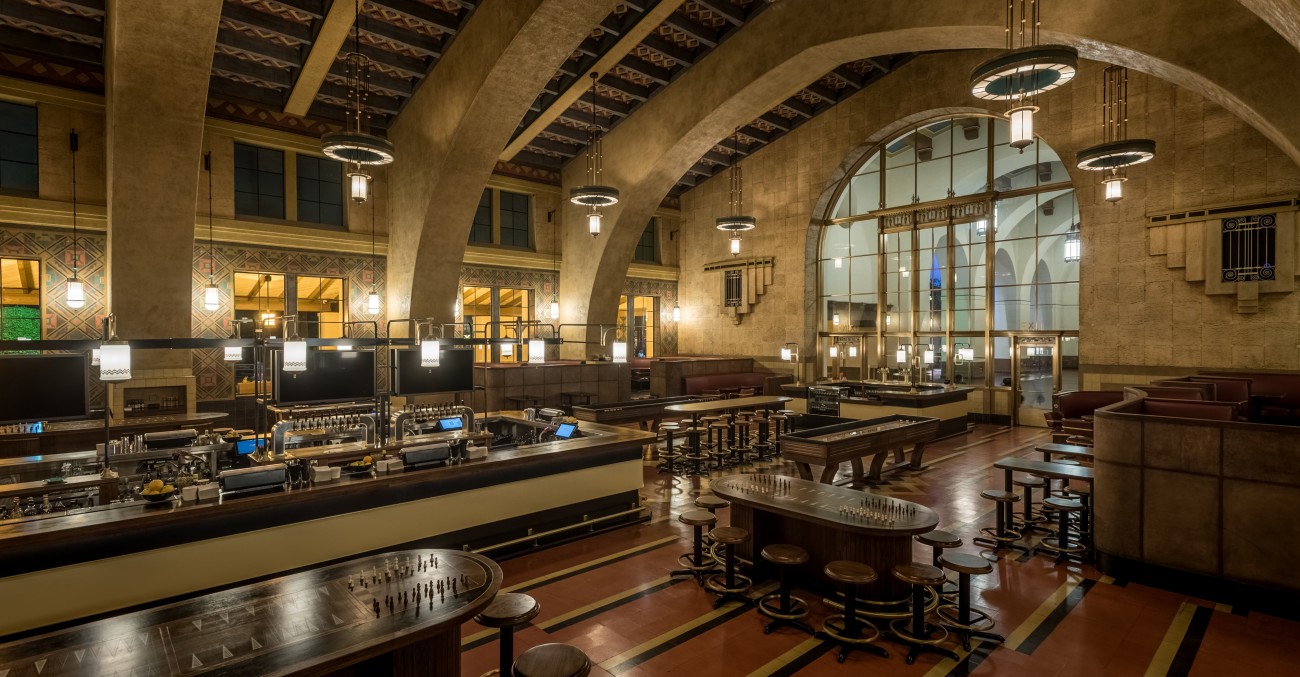 In It for the Long Haul

There are plans for Union Station to add office space, residential units, and more retail in the coming years, officials say, and by installing the brewery now (along with another 213 Hospitality project in the station—the Streamliner, a cocktail bar), they are laying the groundwork to get people thinking about the location overall as a destination rather than just a hub.

Randall, who has been brewing professionally for years, including time at Port Brewing Co. in San Diego, and who worked at Arts District before coming over to help launch Imperial Western, says there have been some modifications to the beer lists in the hopes of luring a more diverse clientele.

“It’s certainly more restrained. We’re not doing as much crazy stuff. We listen to the clientele: They want to drink lager and West Coast IPA. They are a little more mature in their preferences,” she says.

The brewery also offers eighteen rotating drafts, down from the thirty served at Arts District. This keeps ordering a little easier for visitors and service moving a bit faster. But it also allows the brewers to slow down themselves and really think about the diversity of the lists and to find recipes that will resonate with customers, not just grab a fad.

“The biggest challenge we have is getting people in the door. We’re just slightly off the beaten path, a concourse away from all the action of the main waiting room,” Randall says. “We are in this for the long haul. A lot of money went into making this a long-term success, but we need to let people know that we’re here and push them to walk a few extra steps to have this great experience, to let them know it’s here waiting for them.”

The 213 Restaurant group made a significant financial commitment to the space, restoration, and long-term plans to keep Imperial Western on the tracks, officials say. Because the station is on the National Historic Registry, there are restrictions to signage—even things such as sandwich boards are frowned upon (and this goes for the other establishments in the space, although since most are located inside the main terminal, this appears to be less of an issue for them). Randall says the brewery understands all this and wants to be fair to the other tenants.

“We really are trying to jump up and down and shout ‘we’re here!’ ” There is support from the landlord, LA Metro, because the theme of the brewery and its restaurant fit nicely into the overall dining vision for the future of the station. There are casual spots, a white linen–tablecloth restaurant, and the cocktail bar, and the brewery fits into the middle of that, a place where people can have a little fun, blow off some steam.

“This was a marriage made in heaven,” says Kenneth E. Pratt, the deputy executive officer, real estate, for Union Station Operations and Management of LA Metro. “We looked hard for a restaurant and operator to come into the facility.”

Pratt says that LA Metro, which took over Union Station about 8 years ago, is continuously looking for ways to keep passengers who use the 541 trains that pass through the station daily entertained and engaged. This means not just dining and drinking but also cultural events.

It’s a good bet that, once word fully gets out to the city, more and more visitors will come to Union Station just for the brewery, either by transit or not. Already it seems to be among the top spots for the city’s beer knowledgeable to bring visitors from out of town.

Q & A: Other Half Brewing Co. Cofounder and Brewer Sam Richardson

Other Half Brewing, long the sought-after IPA and stout maker in Brooklyn, New York, is expanding operations, but that doesn’t necessarily mean it is getting bigger.