Kid- and pet-friendly Level Beer, opened recently in Portland, Oregon, is helmed by industry veterans who wanted a place where they could ply their craft, hang out with their families, and work to make pale ale cool again.

Before Geoffrey Phillips, Jason Barbee, and Shane Watterson opened Level Beer on the outskirts of Portland, Oregon, two years ago, they had a pretty clear idea of what they wanted the brewery to be. Both Waterson and Barbee are long-time brewers. They met while working at Deschutes Brewery in Bend many years ago. Phillips is the owner of venerable local beer bar Bailey’s Taproom.

They wanted to focus on balance, reinventing old-school styles, and working at a brewery that would suit not only their professional desires but also allow them to spend time with their families. 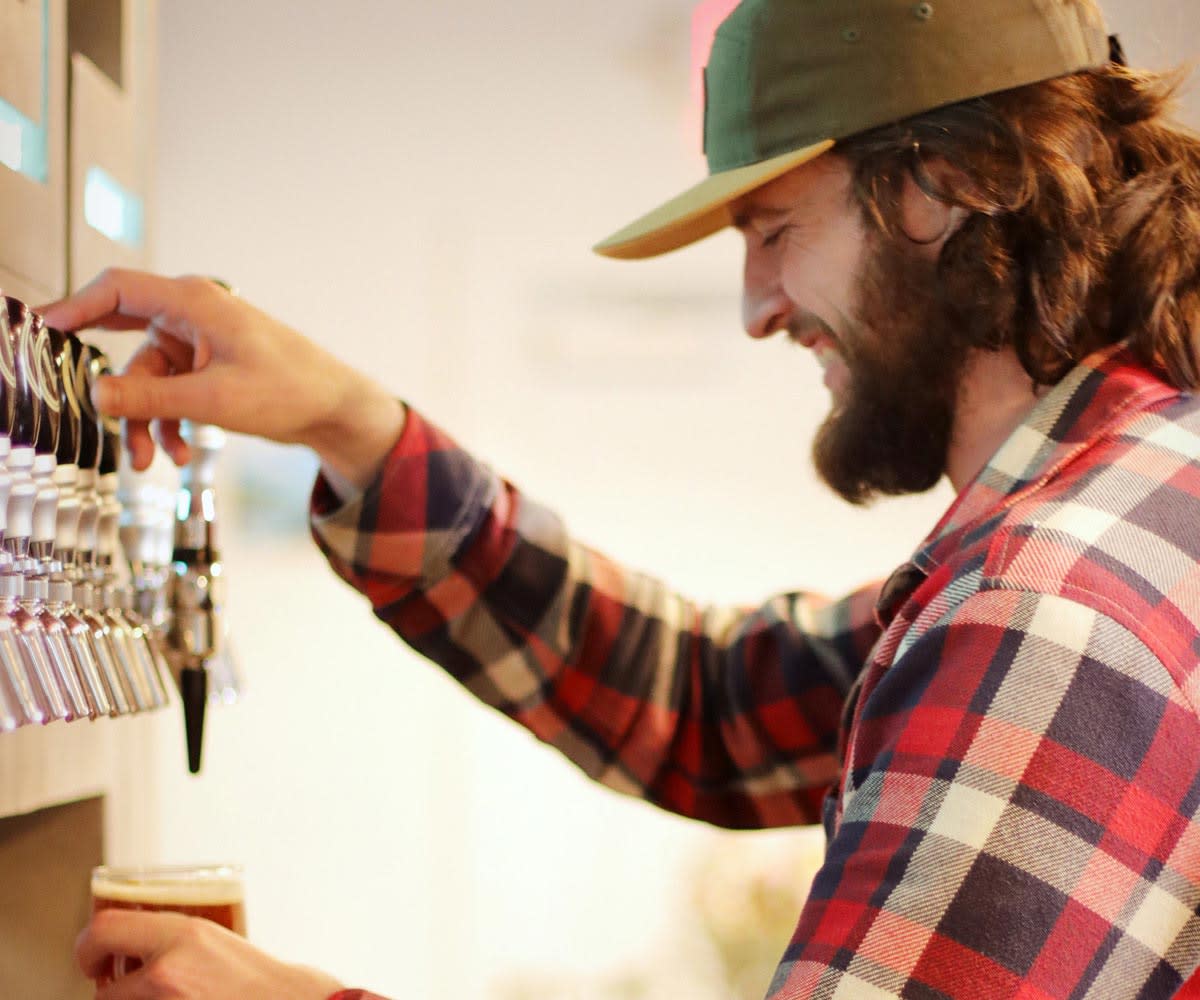 “Low-key family-friendly is what we wanted,” Barbee says. That and “to make pale ale cool again.”

What they found was a two-acre property in the northeast section of town just blocks from the Columbia River in what was once farmland but is now mostly light industrial. The brewery is housed inside an old barn—“a single-walled, single-story wood structure that is as basic as it gets”—that had served as a produce market for 35 years. An attached greenhouse has been converted into an all-weather beer hall.

Barbee calls it as low frills as you can get, and that’s fine with them. So long as there is room to stretch out a bit and focus on the beer, they are happy.

Importance of Kid-Friendly and “The Rules”

One of the more controversial aspects of craft beer these days has little to do with what’s in the glass but centers more on who is hanging out at a brewery. The conversation (argument really) about whether children should be allowed in taprooms is like the third rail—you shouldn’t touch it. But it seems like every week on Twitter, on forums, and even in person, people on both sides share passionate opinions and try to convince nonbelievers to agree with them.

Level Beer has no such argument. One of the reasons the partners liked the property where the brewery now sits is that it was meant to be family-friendly. It sits on two acres with a large beer garden, so there are open fields where kids can kick a soccer ball, dogs can chase Frisbees, and parents can either join in or watch on the sidelines with a low-ABV beer. 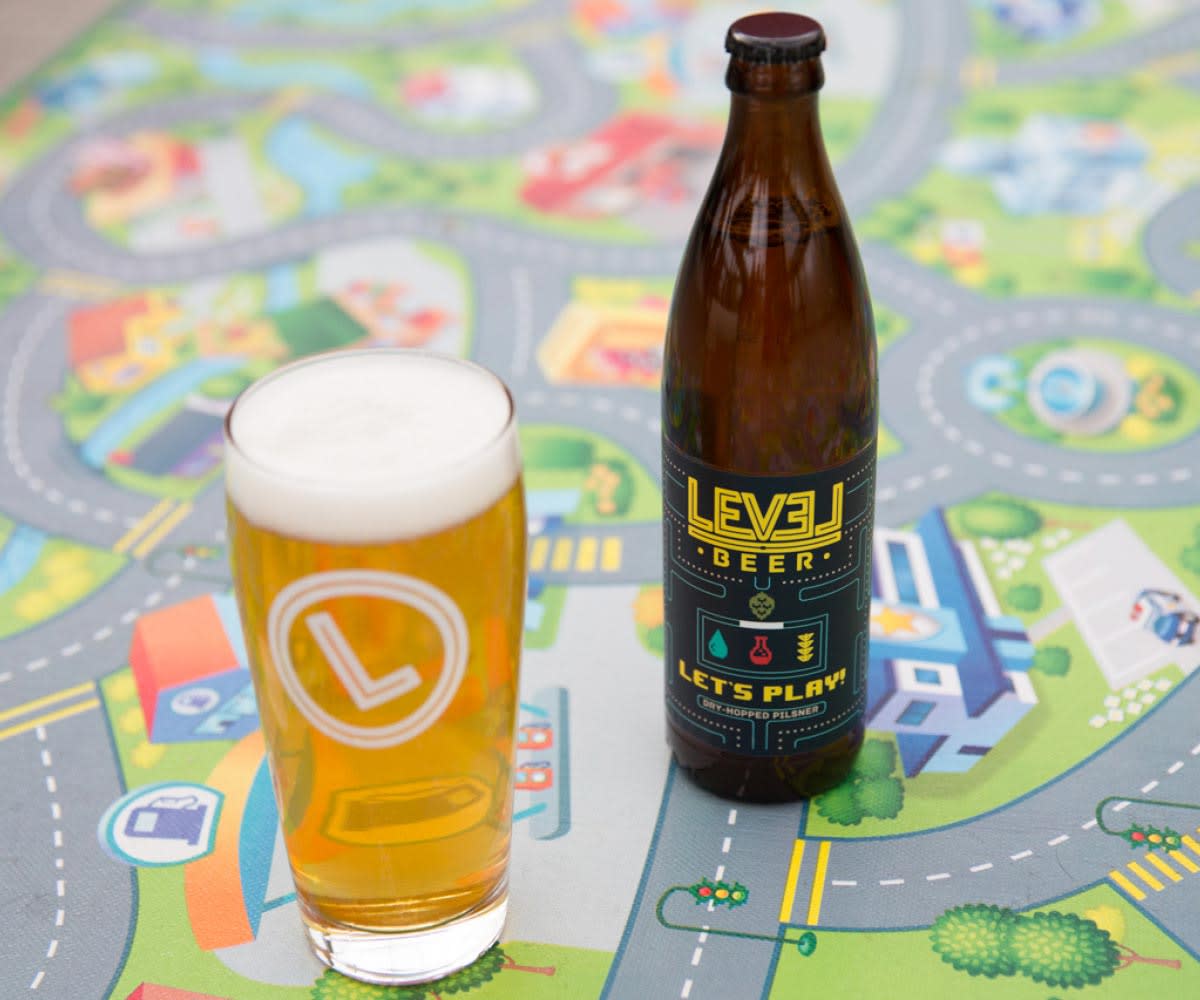 A gaming theme runs through all of Level’s branding.

While some kid-friendly breweries go to great lengths to set out all the rules customers and their children must abide by, Level keeps it simple.

“Basically we make it clear that it’s not a free-for-all and that you should clean up after yourself,” Barbee says. “It’s basic, and folks know to watch out for their kids and dogs.”

Because they’ve established Level as family-friendly in person, on their website, and through social media, it really shouldn’t be too much of a surprise for first-time customers who might be kid- or Fido-averse, and Barbee points out that the brewery is big enough to house two bars and that with room to spread out, it’s usually not too hard to find some solitude. 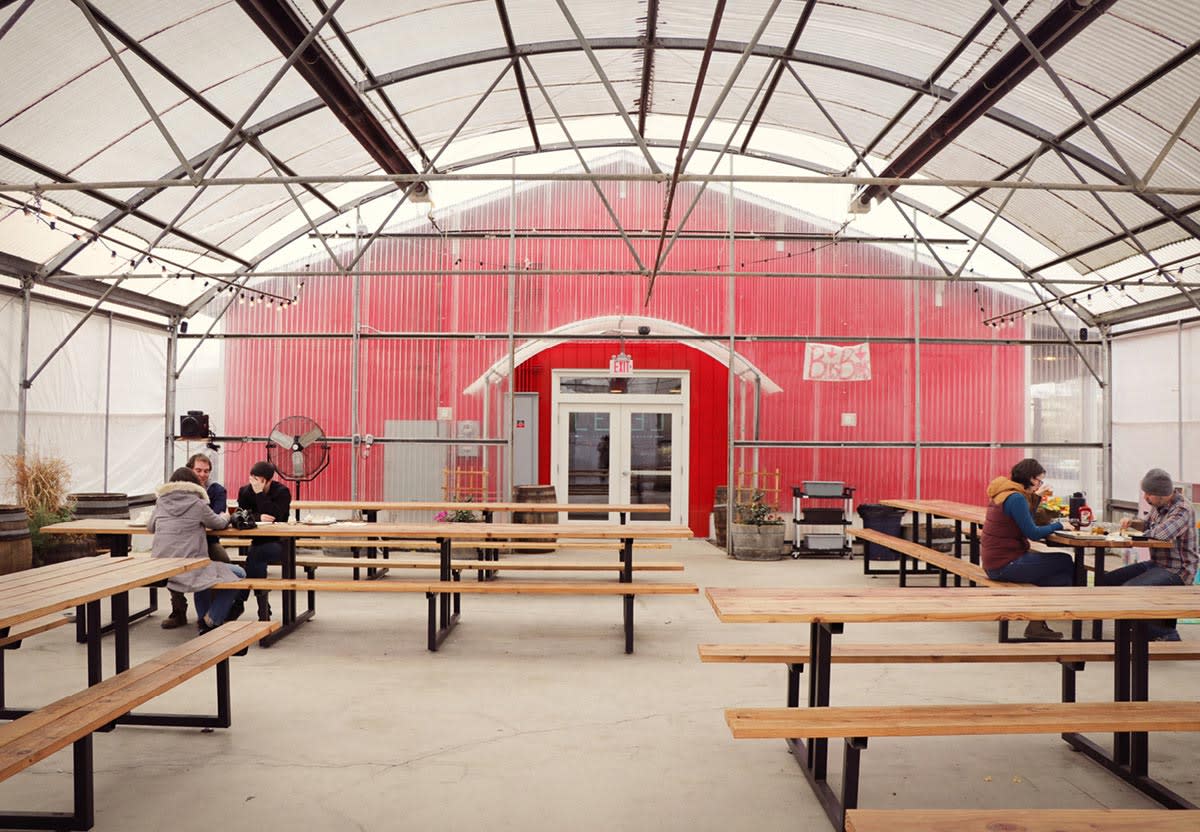 An enclosed greenhouse beer garden allows for an outdoor feel even in Portland, Oregon’s unpredictable weather.

There’s no shortage of great beer being made in Portland, but there’s a reason that Level stands out among the crowd and why it appears on so many “must visit” lists by local writers and media types.

“We make everything; we run the gamut,” says Barbee, who was the head brewer at Ex Novo Brewing Company in Portland before starting at Level. “But we tend to brew on the low end of the ABV spectrum. We think our sweet spot for beers is about 4.8 percent ABV. Even our double IPA is going to be in the high sevens, not low nines.”

Big on flavor, low on booze is where they enjoy experimenting. It also fits in with the company’s kid-friendly stance. As parents themselves, they’d rather have a few pints of low-ABV beers than a high-ABV monster that would put them away.

Having worked at Deschutes, Barbee and Watterson (who worked at Laurelwood Brewing Co. in Portland before starting at Level) appreciate classic styles but aren’t content with making the recipes taste like they always have. 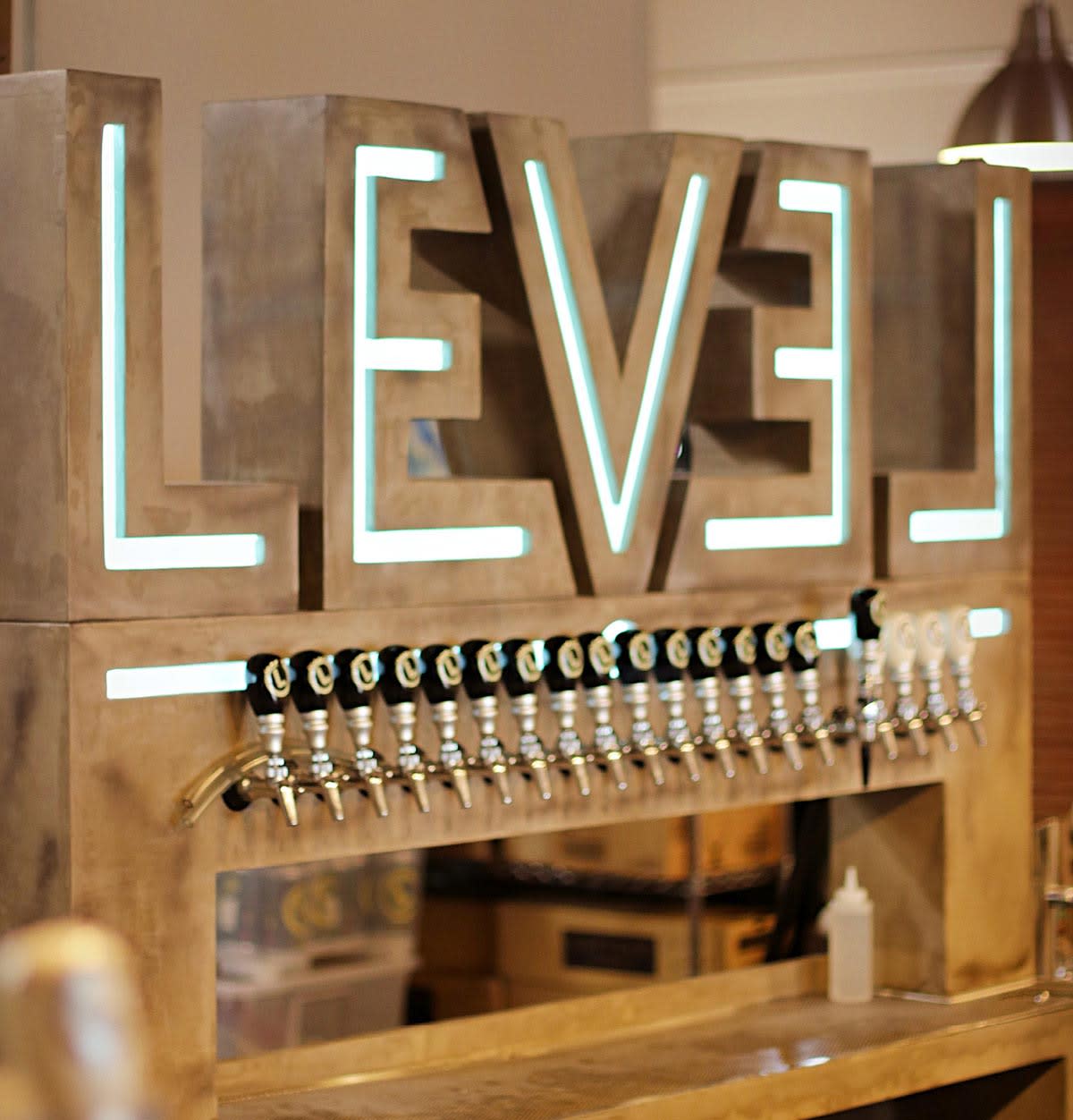 Barbee says they think of the styles as still having room for innovation and want to keep them interesting. This means working with local hops growers and local maltsters to bring new flavors to classic pale ales that have a twinge of familiarity but also intrigue.

“You can walk into breweries and find a lot of hazy IPAs, stouts, and sours, but it’s rare that anyone has a pale ale, so that’s where we try to put our focus,” Barbee says. “We play with these classic styles, and just from a sales perspective, we sell a lot more pale ale than any crazy sour thing we might put on.”

That’s not to say that they don’t experiment with en vogue styles, but when they do, it’s in their own way and doesn’t always wind up hitting the right chord. Barbee says that last summer they made a Berliner weisse with watermelon and basil that clocked in at 2.5 percent ABV. It was light and refreshing and just where they wanted it to be, but they found it tough to sell $6 pints.

The same was true when they started packaging beer for distribution shortly after opening. The first beer they put in cans was Ready Player One, a dry-hopped saison at 4.8 percent ABV. Level wanted to put something else into the market besides an IPA and thought that customers would flock to the style. It did modestly well, but after a while, their distributors began clamoring for an IPA.

Soon enough, Game On!, a 6.5 percent ABV IPA, joined the mix. It’s now the best seller of their regular offerings. The saison is in third place behind Let’s Play!, a 4.7 percent ABV dry-hopped Pilsner.

“No matter what, it comes down to the fundamentals. If you’re a good brewer and do everything correctly, you’re going to get good, clean, high-quality beer, and people respond to that really well,” Barbee says.

In conversation, Barbee keeps coming back to the pale ale. The brewery does make hazy versions but is keen to give it some Old World ingenuity.

“We try to make beers in that niche because we do want a successful business, and that’s what a lot of people want, but we also try to stay true to who we are, so ours have bitterness and more assertive what I’d call ‘beer flavor,’ and that surprises people because they aren’t always ready for a nice bitter finish.”

By bridging the gap between the older flavors and newer ones, Level believes it will be able to serve its current target demographics (usually drinkers in their thirties and forties) and the younger ones who might venture out to the brewery but expect to see only various shades of pale. 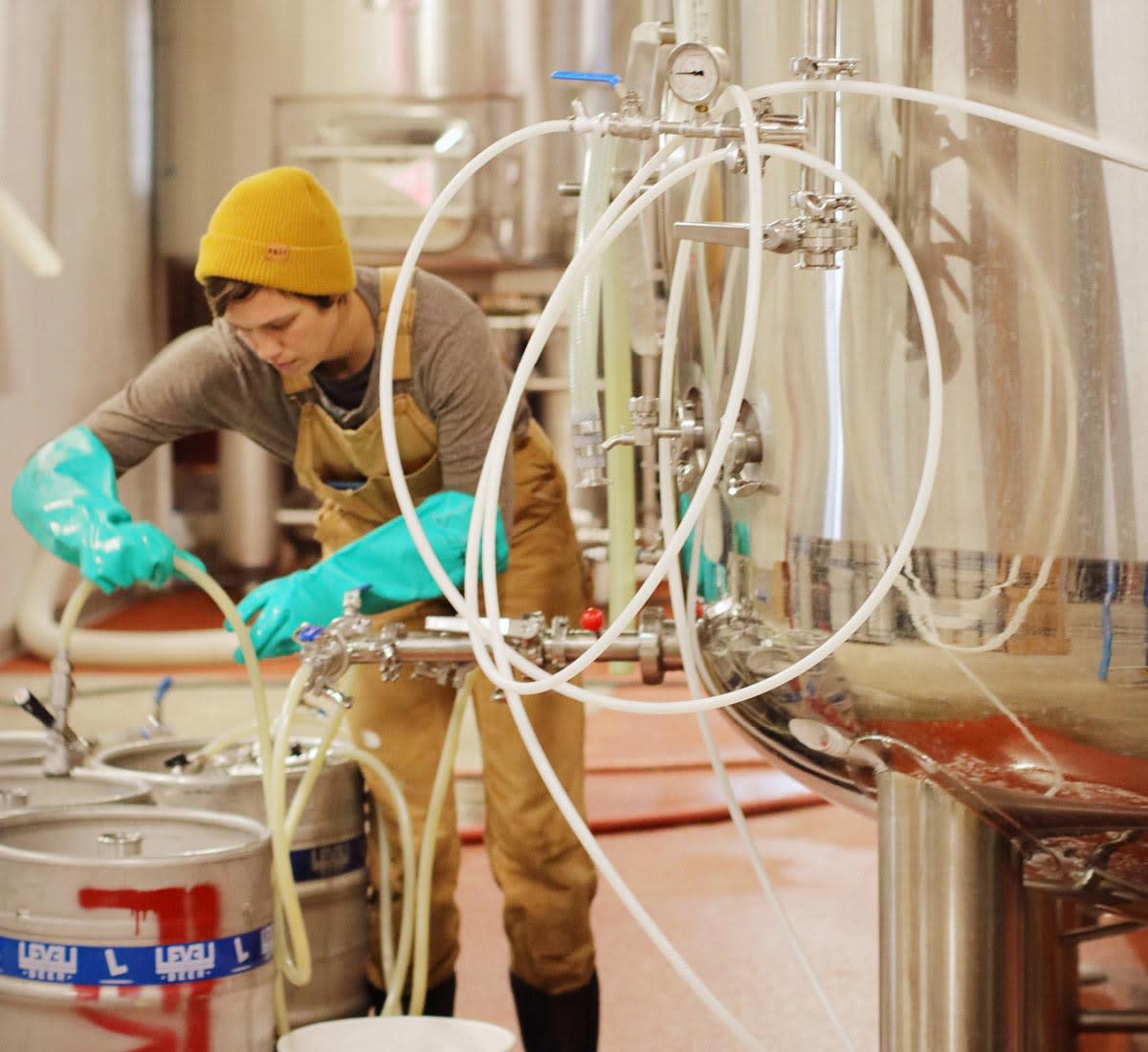 When they were putting together the plans for the brewery, one thing the brewers wanted was a pilot system that would mirror their main system. That’s exactly what they got—a 3-barrel system, complete with a step mash, that is just a miniature version of their 20-barrel brewhouse.

“Everything, all of the bells and whistles, just minus the rake,” Barbee says.

This has helped the founding brewers as well as the new employees they have brought on experiment with new styles that might not be suitable for a 20-barrel batch (“it’d be hard to move that much rauchbier,” Barbee says, “but we can certainly move five kegs.”).

It also makes sense when they want to fill just a single wine barrel with a beer and let it sit and mature.

Having the flexibility of a small system lets them keep a lot of different beers on offer for the taproom customers and try out different ingredients to see how they would play on a larger scale.

“It’s important to us to offer that kind of diversity and to understand the economics of a brewery as well,” he says.

So far, the plan appears to be paying off. In their second year, the brewery made about 2,500 barrels and is on pace to double that number. They didn’t plan to hire any new employees until they reached this point in time but already have eleven folks on payroll and now are expanding their sales staff.

“We’re larger than we expected to be, and this comes with its own interesting sets of challenges. But being industry veterans, I think we know how to meet most of them, and I think we’re in a good place for any of the challenges that might be facing the overall industry. Because of our time in the industry, we knew a lot of the small mistakes to avoid early and that’s helped us today.”

The Importance of Brewery Customer Interaction

Breweries that are open to the pubic are more than just beer. There’s a customer relationship that develops, and making sure that public-facing employees are in sync with those in the brewhouse or kitchen is vitally important to success.