When a fermentation-obsessed brewery tries its hand at making sake, it learns how to balance a side project while staying true to its identity—and business plan.

While seemingly every other brewery was debuting a line of ciders or hard seltzers, Chicago’s Off Color Brewing was fermenting something entirely different: sake. Often referred to as rice wine, sake in fact shares a fundamental kinship with beer: They’re both fermented from a grain base. But sake occupies a much smaller niche than beer or wine in the United States, where only roughly twenty producers ferment and sell it. Brewing sake provided a creative outlet for Off Color Cofounder John Laffer and held the potential to become a new product category for the brewery. The key was to keep the side project at the right size.

Sake would seem an incongruous choice for many American breweries, but not for Off Color, which since it was founded by John Laffler and Dave Bleitner in 2013 has been yeast- and fermentation-focused. When beers based on ancient beverages and foeder-aged offerings with wild and native yeasts and bacteria are par for the course, it takes something truly off-the-wall to pique Laffler’s attention. That thing turned out to be koji. Koji is a fungus critical to sake making because its enzymes break down rice starches into fermentable sugars; that saccharification occurs at the same time and in the same vessel as fermentation. It is a yeast-and-mold nerd’s dream ingredient.

“It’s a fun process. Sake brewing is extremely hands-on,” Laffler says. “And it’s different. We make wort day in and day out, and after doing it for a decade now, it’s very predictable. We know what’s going to happen—mashing and lautering, there’s not a lot of excitement there. So just doing something a little bit different was reinvigorating.”

After working with koji to produce a collaboration beer called QingMing in conjunction with Chicago’s Field Museum in 2017, Laffler continued to use it to brew actual batches of sake, albeit on a small scale. Off Color first purchased about $200 worth of plastic buckets and rudimentary equipment—“basically like we were homebrewing”—to create its first sake. From there, the brewery decided it would reinvest proceeds from the first batch to purchase more equipment for later, more sophisticated, batches. That funded a $1,000 proofing cabinet to control heat and humidity while growing the koji. Soon after, the brewery invested in a $2,000 bladder press that saves Laffler from hand-pressing brewed sake to separate its liquids from solids. 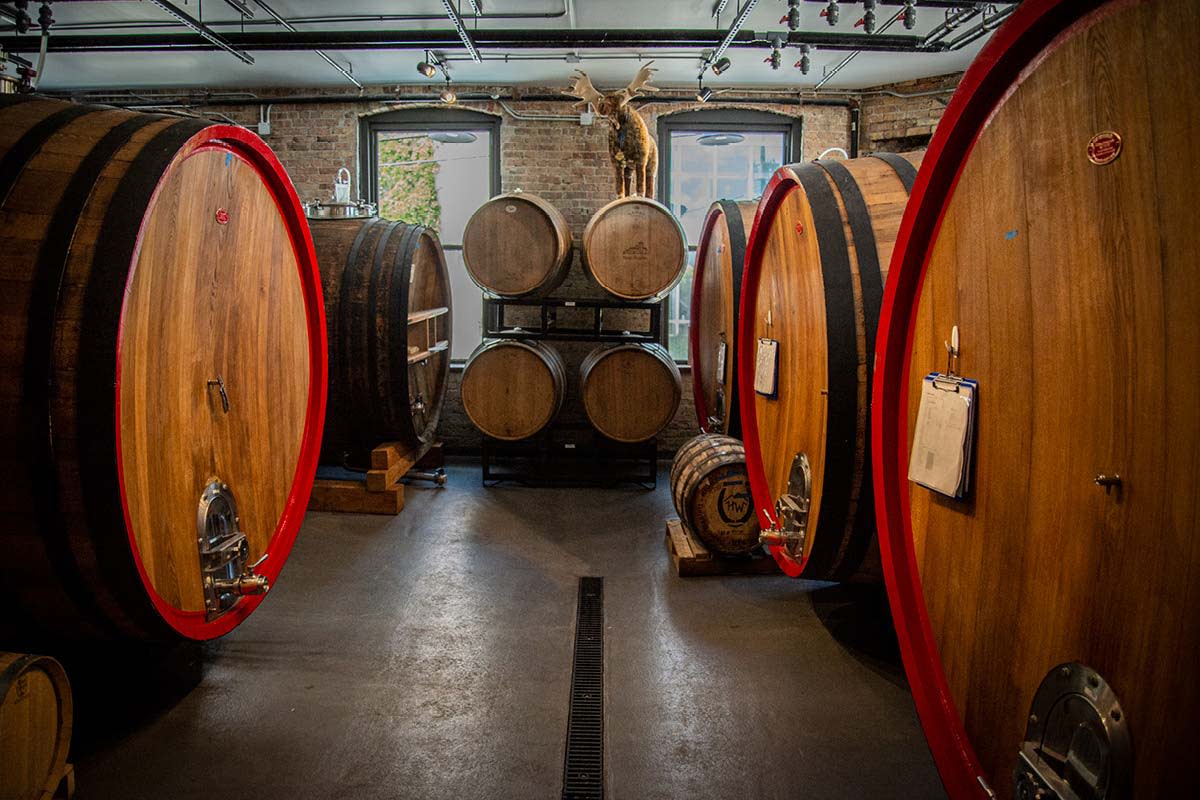 The foeders at the Mousetrap contain different cultures, allowing the brewery more flexibility in blending and beer design.

“The larger perspective was making an interesting beverage that excites consumers and could make its own money,” Laffler says. “If it were just a marketing expense, even, that would be fine. We could spend money on it, but obviously we can’t lose thousands and thousands of dollars. But it sells for a premium, and it has so far paid for itself. Trying to scale it up to wholesale would be an entirely different thing.”

It’s a good thing it’s been self-sustaining because sake would be a difficult beverage on which to pin a significant portion of a brewery’s projected revenue. Obtaining licensing approval to make sake took 9 months of back and forth, which Off Color was happy to wait out as it brewed and sold its beers. Laffler says the TTB isn’t used to issuing sake permits; in fact, the agency so rarely gets a sake-brewing application that the forms aren’t even available on its website and must be filled out in hard copy.

“Fortunately for us, this is not what we’re trying to do for a living,” Laffler says. “We’re not paying the rent with it.” 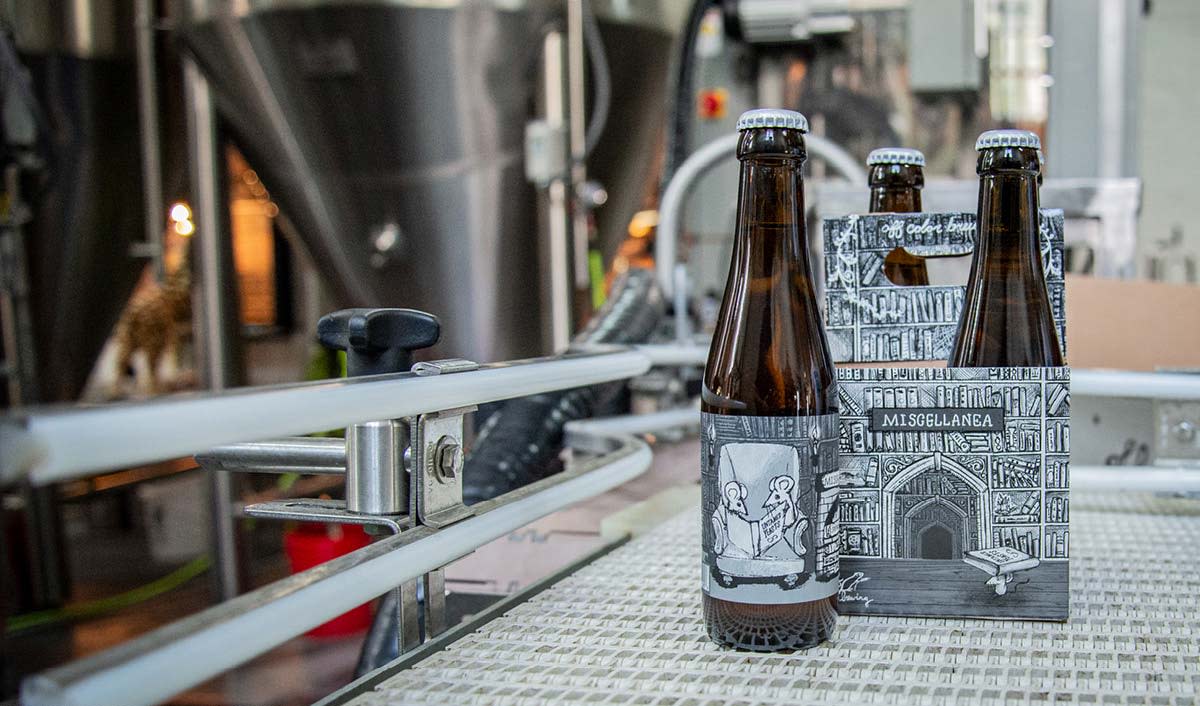 With 750 ml bottle sales declining, Off Color switched to packaging many of their mixed-culture beers in 4-packs of 8.5 oz (250 ml)bottles.

“We’re not looking at it from a perspective of ‘Here’s the budget we have for this; you can spend 5 percent on R&D.’ That’s not how we approach the projects we do,” he says. “Having beers that take, on average, 4 weeks to ferment gives me time to explore new grounds, new stuff.”

Of course, timing aside, the sake still has to sell eventually. Without any external marketing, the first time Off Color put a sake on draft in its taproom, the space was almost at its 120-person capacity. Customers had been tipped off only by the brewery’s social-media feeds or those who’d shared those posts, and it was enough to pack the house. Laffler estimates the crowd was about 70 percent customers he recognized; the remainder were people interested enough in such a niche beverage to come taste the only one brewed in Chicago.

Off Color has earned this type of following after 6 years of brewing esoteric, but well-liked, beers. (Its year-round releases are a gose, a Czech Pilsner, a hoppy saison, and a Belgian ale partially fermented with wine yeast. Everything gets weirder from there.) Its customers expect and appreciate slightly inscrutable experiments and are willing to take a chance on the next wild creation. Off Color banks on this but knows its products, whether beer or sake, still have to feel true to the brewery’s identity.

“If we’re doing something so bizarre that it doesn’t fit in our general model, then we probably shouldn’t be doing it,” Laffler says. “Scaling production to what we know the market is, is important. We’re not swimming in it; we’re not in this position that we have to force it on people. We’re not standing in the middle of a liquor store doing sampling or anything like that.”

The brewery has so far eschewed spinning off its sakes into their own brand and has instead just been releasing them as Off Color sakes. Future batches will be packaged in the same 4-packs of 250 ml bottles the brewery uses for some of its beers and will feature different artists’ work around a central theme (Japanese cat-demons called kasha) rather than label art from the illustrator the brewery generally uses. They’ll be subtly different, but still recognizable as Off Color. When a brewery is as small as Off Color is, Laffler explains, it doesn’t feel right to spin off projects into too many different directions.

“It will grow a little from where it is now. I’d like to make more than a couple of barrels a year but not a ton,” he says. “Instead of trying to make very traditional sake, we use this methodology to incorporate what our brewery is already doing, which is looking at different types of fermentations, especially wild fermentations.” 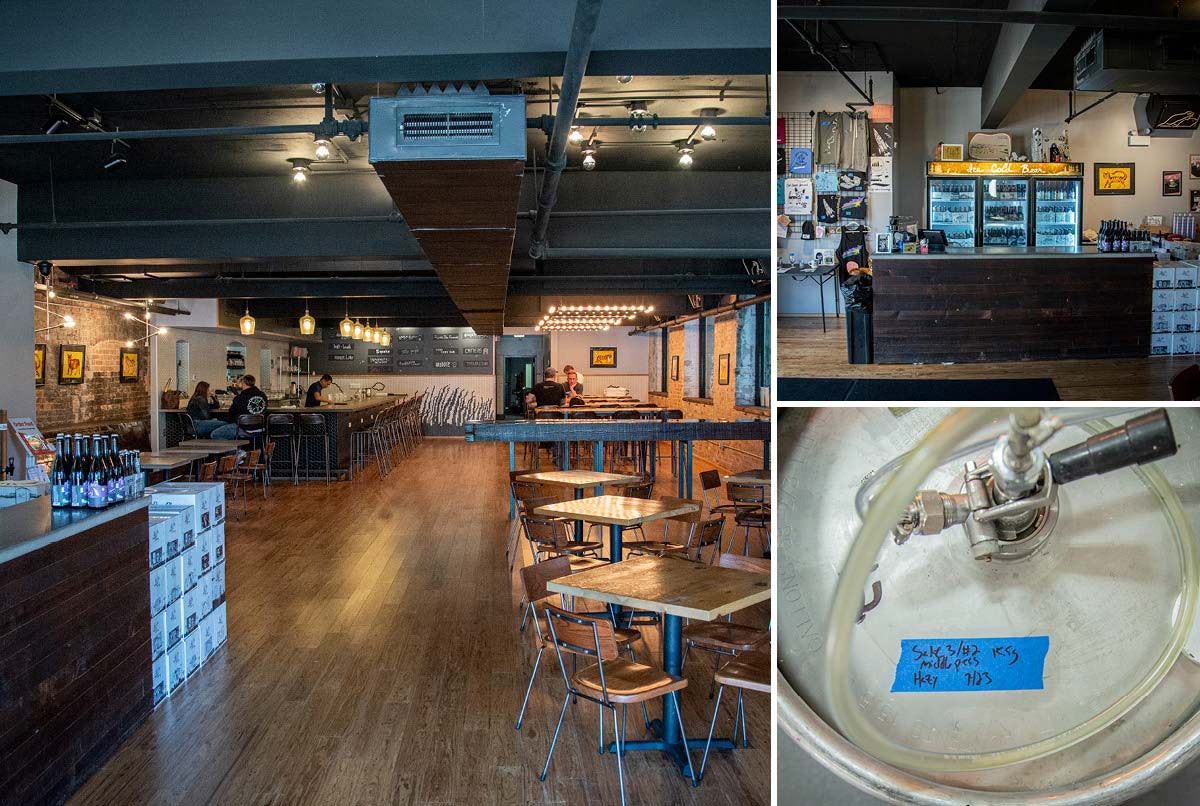 Clockwise from left: The Off Color Mousetrap taproom offers a view of the brewhouse and cellar to the right; a retail to-go area is positioned near the front door for grab-and-go purchases; a keg of Off Color sake in the brewhouse

To that end, the sake project isn’t entirely self-contained. Off Color first used koji 2 years ago to brew its QingMing beer, and again in 2018 to brew Cygnet, a foeder-aged wild ale brewed in collaboration with Averie Swanson of Jester King. The interplay between the sake- and beer-brewing sides opens not only creative avenues, but can be a way to make the sake project even more viable. Brewing beer with ingredients also used in sake is a natural conversation point for the brewery, too—a way to draw a curious drinker’s attention to a new category of beverage. Exhibit A: Off Color’s Koi, a rice lager brewed with sake lees—the pudding-like rice and yeast mixture that remains after the liquids are strained off following sake fermentation.

“Lees are a very expensive by-product. A lot of cost goes into the rice and the yeast you have to buy and have shipped from Japan—it’s a whole thing,” Laffler says. “Being able to use them is kind of neat and worthwhile.”

Money is, after all, a finite resource, as is a brewer’s time. Laffler is able to devote hours to sake because Off Color has enough brewing staff that he doesn’t have to take shifts at the production facility. It’s still a challenge, though, when you’re the only person in your brewery working on a specific type of fermentation and one of the only breweries making sake in the country. There are few people to call for troubleshooting or guidance or to lend an extra hand; even sake breweries in the United States, Laffler says, are “generally very confused” by why Off Color is doing this.

Of course, he wouldn’t have it any other way.

“That’s part of the allure, I think, for me. As a whole, we’ve always been a very niche brewery,” he says. “It just fits in our general ethos. We like trying new things, trying new ideas. If we’re doing the same thing as everyone else, it’s no longer an artistic endeavor; it’s a commercial one. Like ‘Oh let’s make a better widget than the person next to us.’ No. I don’t want to make widgets. That’s not why I’m doing this.”

But, here’s the million-dollar question for a brewery: How do you make money off your non-widget passion projects?

“By charging a lot for them and hoping people show up.”

Photos by Jamie Bogner, except where noted.

Kid- and pet-friendly Level Beer, opened recently in Portland, Oregon, is helmed by industry veterans who wanted a place where they could ply their craft, hang out with their families, and work to make pale ale cool again.