Stubborn idealism meets commercial reality at one of the country’s best-regarded mixed-fermentation breweries. But as the market continues to change, how will the brewery’s strategy change with it?

Even before its first batch of beer, the Ale Apothecary was a brewery defined by tensions.

Disillusioned with his brewing job at Deschutes, Paul Arney quit his job there. With his wife, Staci, he then opened a brewery that would produce the antithesis of what he refers to as “factory beer.” As much as their brewery outside Bend, Oregon, was meant to be an embrace of their ideals—freedom, craftsmanship, a sense of place—it was equally a rejection. It was built in purposeful opposition to the trappings of most modern American breweries. When the Ale Apothecary brewed its first beer in 2011, it had no stainless steel, no tasting room, and no staff besides Paul. He intended to keep it that way.

In the seven-plus years since founding the Ale Apothecary, Arney has had to make decisions that often feel like they’re pitting his vision for the brewery against marketplace realities. He’s compromised on some of his early positions; the Ale Apothecary now has four full-time employees (including Paul and Staci), a tasting room, and distribution. It recently paid Facebook to boost one of its posts for the first time.

Recent trends would appear to work in Arney’s favor—American wild ales, the Ale Apothecary’s raison d’être, were the third-fastest-growing beer category year-over-year according to Nielsen data—but the market is crowded. Breweries that began barrel-aged, mixed-culture programs years ago now have product to show for it, to say nothing of the fast-to-produce kettle sours that scratch some consumers’ itches for tart, effervescent beer. Arney says his production was roughly flat last year, at about 200 barrels. He also acknowledges that he could be moving some of his beer from warehouse to shelf faster. It has forced difficult decisions for Arney, who finds himself thinking more about how to find the right audience for his beer than he had to do in the past.

The tensions in Arney’s experiences mirror those of countless craft brewers who realize that the facts of a crowded market can clash with the vision and business structures on which they built their breweries.

“Just this past week or two, my wife and I have started to talk about how people use scarcity as a marketing tool,” Arney says. “And I feel terribly over my head because I came at this from a place of, well, I don’t want to have to deal with any of that bullshit. But along with developing our tasting room, these are places where we can grow our business.”

His beers are esoteric, even by beer-geek standards: naturally carbonated, open-fermented, barrel-aged, and bottle-fermented. Their price tags reflect that and early on, Arney thought it would make the most sense to outsource the sales part of the process so he could focus on making beer and running his idiosyncratic, labor-intensive brewery.

“I started initially as a brewer who wanted to just make beer and basically have other people deal with the selling of it,” he says. “I chose to rely on distribution right out of the gate.”

Now, Arney is more interested in pulling back that geographic distribution range. He’s still sending beer to places such as Japan and Australia, but he’d prefer that those orders come via special request in the future. He wants to focus on selling beer mostly through his taproom and bottle club and closer to home, where he can better tell the Ale Apothecary’s story and justify its price tag.

“We have to find a way to communicate to this end-consumers, who may just walk into a shop somewhere and not know who we are and see the most expensive beer in the shop is us,” Arney says. “I don’t know if that’s necessarily a good thing. They might say, ‘Wow, look at that. That’s amazing. It’s a pretty bottle and boy, it’s expensive, and I’m going to go buy something else.’”

In response, the Ale Apothecary began packaging some of its beers in 375ml bottles that retail at a lower price. It also has introduced its version of “session” beers: shorter-term barrel-aged beers that mature in six to 12 months and are less sour and more grain- and yeast-forward than the brewery’s other offerings. Those are packaged in 500ml bottles and on draft, contrary to Arney’s initial opposition to ever packaging beer in kegs.

“Our consumers aren’t saying, ‘Hey, make clean beer,’ but they were saying, ‘We sure would like to see your beer available in a more economical format.’” 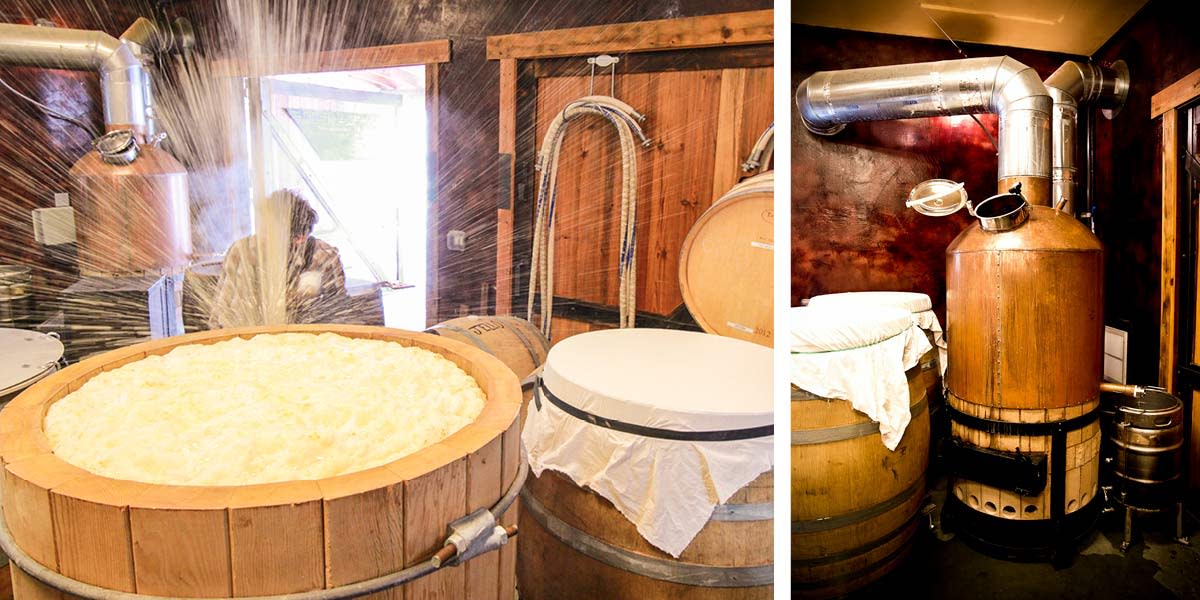 The brewhouse is decidedly smaller and more rustic than most, with primary fermentation taking place in open wooden barrels and tanks.

Given the Ale Apothecary’s obsessive focus on process and place, the brewery itself is the best possible place for consumers to understand its beers, with the Bend taproom a close second. There, staff can educate guests and gently differentiate these aged, bottle-fermented beers from their competitors. It’s why the brewery recently partnered with a local restaurant that will park a food cart permanently at the taproom, allowing the Ale Apothecary to serve larger pours of its “session” beers and hopefully draw in more guests.

“It does seem like there’s a limit to how much information we can get across at once,” Arney says. “We go to these great lengths to naturally carbonate our beer and to use Oregon honey, and it doesn’t seem to be anything that people really care about. But we try to make sure that information is out there. On our tasting room menu, we really make it prominent that our beer is naturally carbonated. On our labels, we always say we’re using Oregon honey. My hope is, I guess, that if people are curious, there is always going to be more information for them to find.”

If the Ale Apothecary can get people to the tasting room or get customers to share their bottle-club allotments with friends, he’s confident that story will translate. It’s a return to old-fashioned, word-of-mouth marketing—with a 2019 spin. He has to be heard through the noise of Oregon’s mature beer market, articulating how his beer is different and worthy of people’s money without losing them in the procedural weeds as he explains why it takes his brewery three days to make wort.

His brewery also appears well-positioned to take advantage of consumers’ interest in visiting destination breweries (à la Blackberry Farm or Scratch), but Arney acknowledges putting some of his beer into far-flung distribution early on may have unintentionally diluted those feelings of scarcity or exclusivity. Navigating the balance is an ongoing process. 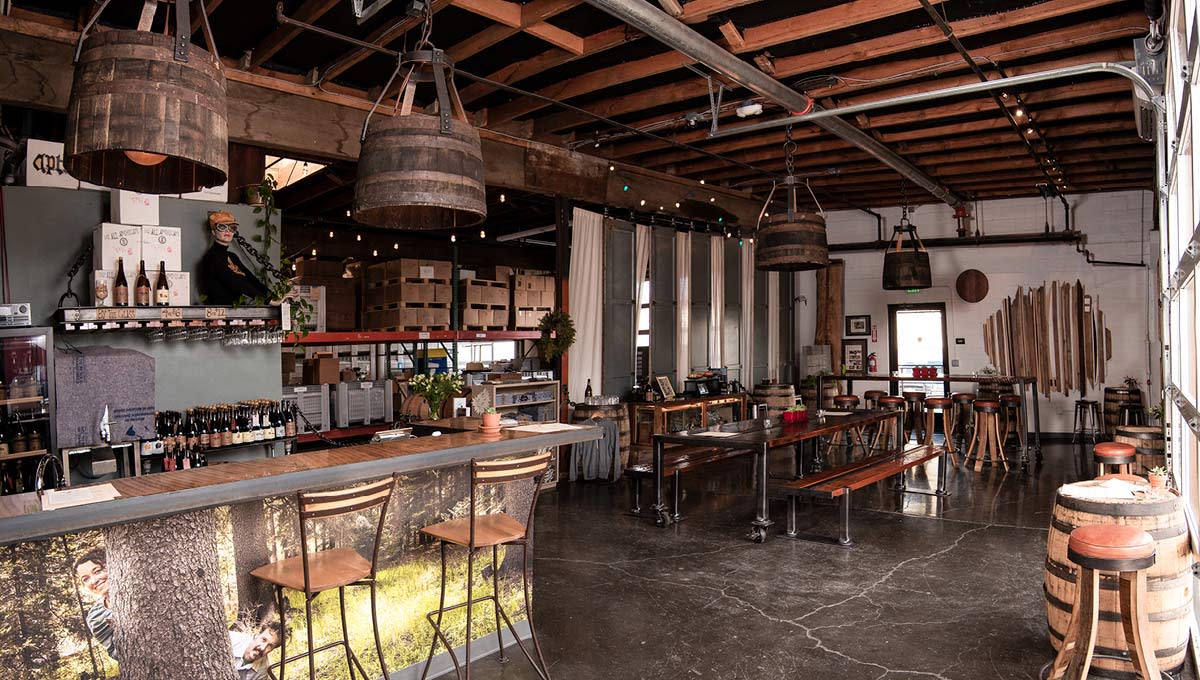 One area Arney feels more comfortable with is brewing operations, which have become less all-consuming since he hired brewers Hans Schopen and Connor Currie two and five years ago, respectively. The team has not only freed Arney to spend more time thinking about getting his beer to customers, but they’ve had the unforeseen benefit of helping Arney justify some expansion and evolution of the brewhouse. Three years ago, Arney took out his first loan to purchase a pneumatic cork-and-caging machine. He slogged through manual corking when he was the Ale Apothecary’s only employee, but he didn’t like the idea of putting his staff through it.

The new machine had the added benefit of improving the brewery’s packaging overall, as Arney had previously left cages off the bottles because he couldn’t manually twist them in a way that looked right. Machine-applied corks and cages made his bottles more secure and safer to ship to distributors and customers. The three stainless bottling tanks Arney had purchased before that provided a similar experience: Initially, he didn’t want to bring any stainless into his brewery; he’d been using elevated barrels with a bulldog to siphon beer out and into bottles.

“My main frustration was that we said we do everything in barrels when we actually don’t,” he says. “Out of the two years it takes to make our beer, maybe they’re in stainless for a few days. That was kind of a hurdle I had to get over. But I accepted that this was a better step for the beer.” 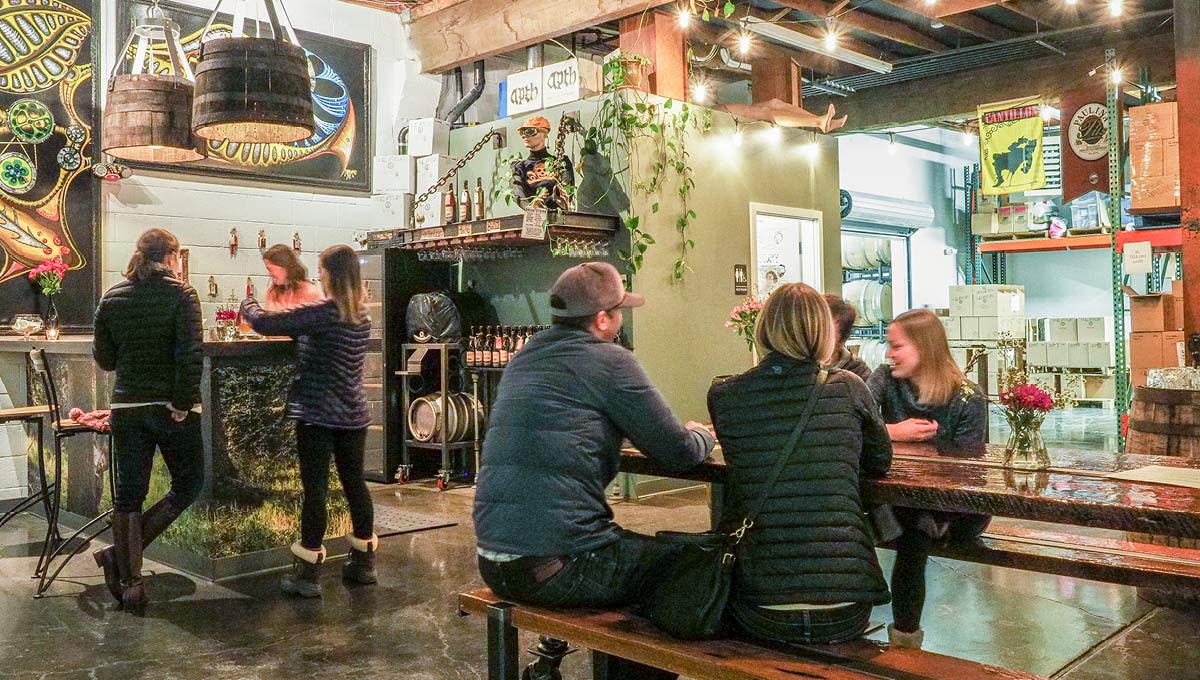 Arney has come around on some of those early reservations regarding upgrades to his brewhouse, and he hopes that 2020 will be a year that he can reinvest profits there. Eight years in, he realizes that there are technologies to improve the Ale Apothecary’s brewing procedures, even if he’s unwilling to do that in a way that would remove the physicality and authenticity of what he does. He’s comfortable now searching for that sweet spot between rudimentary and industrialized, where his brewing process is good for his staff, good for his beer, and maybe—as a bonus—good for business, too. The line between staying true to his vision and outright stubbornness, he says, may prove to be one and the same.

“I don’t have any investors, I don’t have a board,” he says. “I’ve insulated myself from having to kind of engage in maybe even the comfortable conflict that normal people are used to when they run businesses.

“I do think a lot of this ultimately comes down to a stubbornness. I think maybe in the old days, I would’ve called it idealism, but now I think it’s maybe a combination of the two.”

Photos: Courtesy of the Ale Apothecary

Marketing Beer, Direct to the Consumer

Thanks to the changing face of online sales, it’s possible for all beer to be local. Now might be the time to jump on the bandwagon.