When Lexington, Kentucky-based West Sixth Brewing bought 125 acres in rural Franklin County, it learned that agriculture is only one part of the equation.

Surrounded as they are by stainless steel, poured concrete, and warehouse-like confines, it’s no wonder that brewers are a species prone to the pastoral itch. But while the romance of sun-dappled hills and freshly turned soil is strong, operating a rural outpost is as much about tourism as it is about agriculture—just ask Lexington, Kentucky’s West Sixth Brewing, which in June 2018 opened a three-barrel brewery and taproom on a 125-acre farm north of Frankfort.

A 40-minute drive from its production brewery, West Sixth Farm’s taproom doubled its sales in its second year. It is now gearing up for a third season of farm tours, workshops, and harvests. The farm includes a four-acre cider-apple orchard, 325-plant hop yard, honeybees, egg-laying chickens, 600 blackberry and raspberry bushes, an herb garden, pawpaws, sour cherries, two grass-fed black Angus cattle, mountain biking and hiking trails, and a fishing pond. The farm is open to the public Fridays, Saturdays, and Sundays for eight months of the year.

“What better way to go deep in the state of Kentucky than buying a farm?” says Birch Bragg, farm manager at West Sixth Farm. “That helps us achieve our goal of becoming the beer of Kentucky.”

Left: The rural brewery has attracted locals who lacked the “third space” that a taproom can provide. Right: One of two head of black Angus cattle who (temporarily) live on the farm.

Finding the Land for the Vision

The brewery’s leadership team had been eyeing rural spaces for years. They visited and toured about 10 farms without finding one suited to the destination brewery they wanted to build.

Then they found it—the land that would eventually become West Sixth Farm. It had been dormant for about five years. A real-estate agent had bought it for hunting; it had become overgrown and littered with golf balls. Prior to that, though, it had been a working farm with horses and cattle. The West Sixth team knew it was ideal for both agriculture and recreation.

“The land told us where everything was going to go,” Bragg says.

Once West Sixth purchased the land, Bragg met with the brewery’s leadership team every week for hours, sharing the results of soil tests and working with their creative director, Kelly Hieronymus, to create renderings of the landscape and taproom.

Bragg had previously operated a market farm outside of Bowling Green, Kentucky. He says designing West Sixth Farm was a different sort of challenge.

“Aesthetics become a lot bigger part of the equation,” Bragg says. “The other is thinking in terms of how the land relates to getting people out here and keeping them interested in coming back. That’s something most market farms and production farms don’t have to worry about.”

The space had to function as both a farm and a recreational destination, which sometimes required trade-offs. The best soil on the farm was in an eight-acre field about a half-mile from where the taproom is now. However, West Sixth didn’t plant the orchard there because it wanted the trees to be within the farm’s “first zone,” where visitors spend 90 percent of their time. There had been initial hopes for more livestock—pastured pigs, goats—but because they staff the farm for only three seasons, that wasn’t economically viable.

“It’s a scale thing more than anything,” Bragg says. “At the end of the day, we had to make sure the guest experience was awesome and that things looked manicured and maintained.” 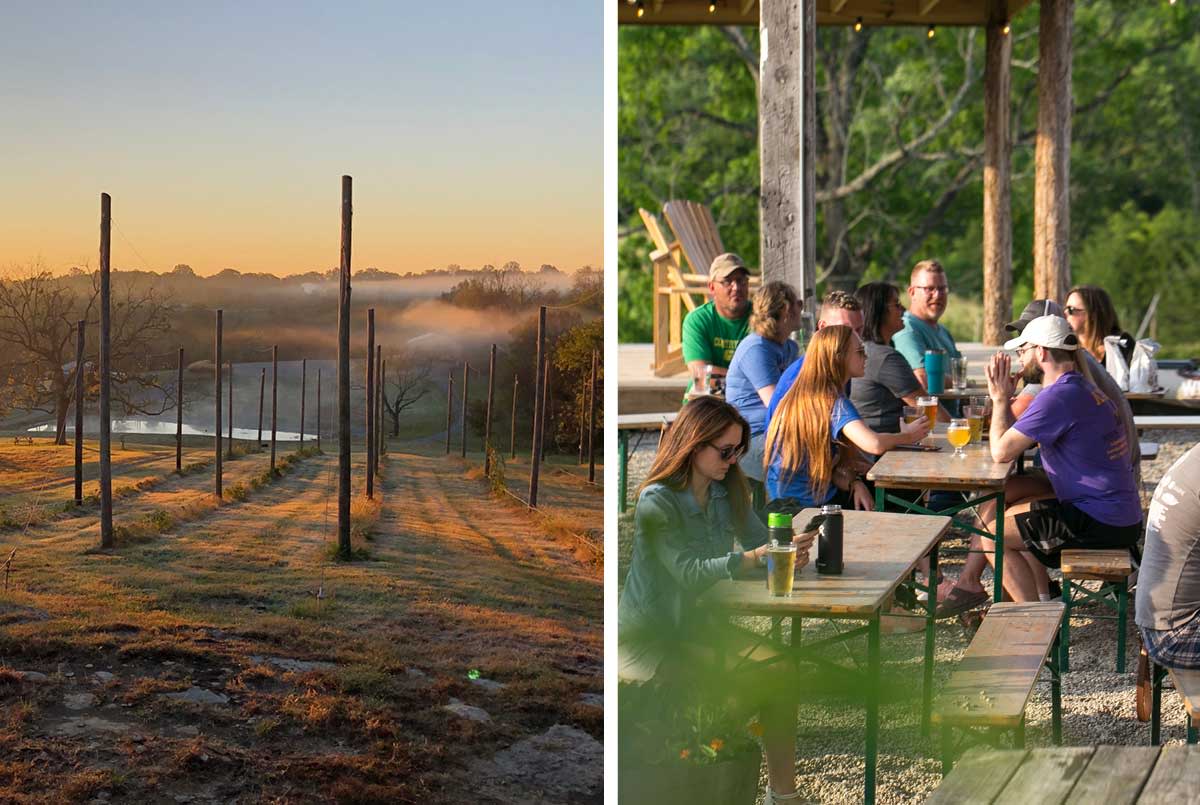 Left: Rows of hop trellises await the next growing season. Right: the farm provides a destination for urban fans of the brewery looking for a natural destination

Once they had purchased the farm and design was underway, community partnerships proved invaluable in spreading the word about what was happening on this grassy patch of land between Louisville and Lexington.

Early on, Hieronymus solicited the Kentucky Mountain Bike Association for advice in designing the four miles of mixed-use hiking and biking trails that weave through the property. The brewery also partnered with the University of Kentucky’s Department of Geography to create maps of the trail system for visitors.

“It’s about trying to get people local to the area to be involved and have some fingerprints on the project,” Hieronymus says.

Much of the refining of the farm’s events programming came during its opening year, when West Sixth staff could observe how the public actually interacted with the space. The fishing pond stocked with bluegill, crappies, and smallmouth bass—initially something of an afterthought—turned out to be hugely popular. And, perhaps not a surprise to some parents, the farm’s ground-covering pea gravel became kids’ favorite play material. (This means the staff do a bit more re-grooming of the gravel than they had anticipated.)

Two early music and farm festivals, which seemed like no-brainers at the time, turned out to be more hassle than they were worth. West Sixth rented equipment and brought in musicians from across the state only to be greeted with pouring rain and no backup plan for either event.

“That really helped us in our second full year open, when we switched to more local expert–driven, low-impact programming,” Hieronymus says, citing successful beekeeping workshops, mushroom hikes, and monarch butterfly watches led by area specialists. “We get a lot of unsolicited requests for different workshops. We’ve established ourselves as a place to go to learn something new that’s agriculture-related.” 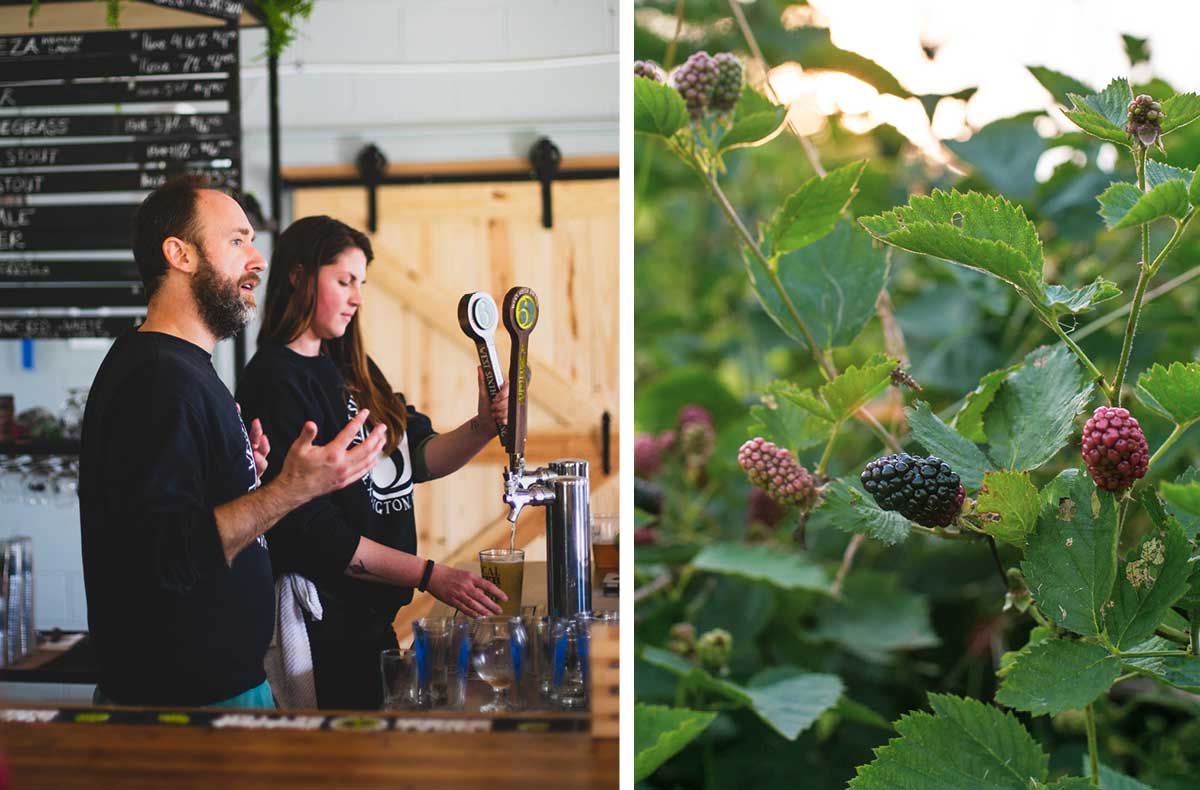 Left: the taproom serves a few production beers from the Louisville brewery, but also maintains a few farm-exclusive beers. Right: Blackberry bushes grow between the orchard’s apple trees, and when they’re ripe the brewery encourages kids to pick them.

It’s Still About the Beer

The success of those programs, though, doesn’t distract from West Sixth Farm’s priority: beer. Connecting visitors to Kentucky’s agricultural history and its outdoor recreation is part of the experience, but ultimately, the taproom is the farm’s beating heart. Beer and craft alcohol—the latter a reference to cider that will soon result from the orchard—were the farm’s two pillars from Day One.

“The beer is going to pay the bills,” Bragg says. “With respect to your scale and the diversity of your enterprises, that’s just a huge point that needs to be worked out from the conceptualization phase.”

At West Sixth Farm, taproom sales determine agricultural projects, not the other way around. If sales show the gross revenue for the taproom is higher than projected, Bragg says, the farm might be able to add more labor to tend more ambitious endeavors. But every aspect of the farm still has to be traceable to what’s in the glass. Even the two black Angus cattle are destined at the end of the season to become beef for burgers sold at the brewery’s Lexington taproom and at nearby restaurants as part of a West Sixth Beef and Beer Week promotion.

“Everything we grow is used for our beers, but not everything in our beers is grown here,” Bragg says, summing up the farm’s philosophy.

West Sixth plans to scale up its estate beers, brewed with the farm’s own hops and fruit. Currently, about a third of the farm’s tap lines pour the core beers from the Lexington production facility. The remainder are seasonals, specialty sour and barrel-aged releases, farm-exclusive beers, and the farm’s flagship, called Peaks Mill Pale Ale. Pouring core brands is especially important, Hieronymus says, because the farm’s clientele is much different from the clientele in Lexington. The farm attracts curious neighbors from rural areas that may be unfamiliar with the eight-year-old brewery, or even with craft beer generally.

On their own, regulars at the Farm’s taproom created a social club, dubbing themselves the “Farm Hands.” The informal group are mostly residents of Franklin County who live within a five-mile radius of the brewery. Because of the rural locale, they have few central gathering spots besides the taproom; some had been neighbors for 20 years and hadn’t met until the Farm opened. Without any prompting from the brewery, the Farm Hands have begun organizing their own small events, such as potluck dinners, at the taproom.

“We’ve reached so many people in a rural area of Kentucky that didn’t even know our brewery before,” Hieronymus says. “Now our IPA is at the BP gas station on [U.S. Route] 127, a mile from the farm.”

For an established brewery, introducing new drinkers to the brand is always valuable. But West Sixth also sees its farm as a physical opportunity to create lifelong fans with deep connections to the brewery, rooted in place, memory, and experiences. Hieronymus describes kids catching their first fish in the brewery’s pond and couples hosting their weddings there. As visitors make visceral memories on the farm’s trails, paths, and land, they’re associating West Sixth with what it feels like to enjoy Kentucky’s great outdoors.

For instance, the blackberries have a roughly three-week harvest season. During that time, the brewery encourages families with kids to set them loose on the bushes that grow between the orchard’s apple trees, letting them pick and eat the sweet berries until their bellies are full.

“People will remember that experience of picking blackberries with their kids,” Bragg says. “Through the years, if the family comes back, as their kids grow, they’ll watch the trees and bushes grow—all while drinking beer.”

The Fraught Process of Naming Beers

Each new brewery that opens in the United States means new beers that need names. Finding ones that aren’t already taken or run up against a trademark isn’t difficult. Do the legwork in advance to save headaches and possible legal fees down the line.