Learn what you don’t know, then get the right help to execute. Workhorse Brewing in Pennsylvania is planning on growth through smart applications of elbow grease.

A lot of ideas happen during bachelor parties. Usually these are booze-filled notions that often lead to unpleasant consequences. However, sometimes they lead to a gem. To wit: the pre-wedding excursion that Dan Hershberg found himself on a few years ago.

Through his cousin, Hershberg had met Bob Bonder when they were in college. They stayed in touch over the years, and when his cousin was about to be married, Hershberg once again found himself with a group that included Bonder, the owner of Rhinegeist Brewery (Cincinnati, Ohio), among the revelers.

“We were in Austin, and we started talking about what he was doing with beer and his business, and I found it fascinating,” Hershberg says. “I was an entrepreneur and had been in the same business for seven years and was looking for a new professional challenge. Craft beer wasn’t on my radar, but after I heard about what Rhinegeist was doing and learned about the industry, I wanted to see if I could get involved.”

After spending some time on the road visiting breweries and “interviewing and learning as much as I could from people in the industry,” Hershberg got some investors and a business plan together and, a little more than a year ago, opened Workhorse Brewing Co. in King of Prussia, Pennsylvania.

“What I found was that people in this industry are incredibly collaborative.”

Throughout the exploratory phase, Hershberg kept coming back to strong pieces of advice that were given to him by people who had walked the beer path earlier. Those led him to hire where he lacked the experience, to plan for growth and success in a big way, and to focus on both the retail taproom space and regional distribution and to hit both strong.

Still, Hershberg, cofounder and chief branding officer (he had been chief executive officer until the brewery recently hired Heineken veteran Patrick van Schie to fill the roll) for the brewery, says the learning curve was steep, even with a background in starting and running companies.

“My previous business was an apparel company. If I sat with someone for 5 to 7 days, I could teach them how to run my business,” he says. “Craft beer is just so much more complicated. You need to know about production, manufacturing, logistics, hospitality, you name it. If it has something to do with business, it’s part of craft beer.”

From the start, he committed to learning as much as he could in areas with which he wasn’t familiar while putting his strengths into the areas in which he was confident he could do good work. And he wanted to find a team that shared that same mentality.

Workhorse isn’t just a clever name; it’s the ethic Hershberg brings to this venture. And you can work both hard and smart. Over and over again, he kept hearing from brewers he met that they started too small, and as success and customers came, they had to pivot quickly to install a larger brewing system or move into a bigger place. So, when it came time for Workhorse to find a home, Hershberg went big in all regards.

The brewery sits inside of a 70,000-square-foot warehouse that is part of an overall 120,000-square-foot complex. The portion that the brewery uses was a toy manufacturing plant that had been out of business for several years before Hershberg and his team moved in.

“Everyone says to have room to grow, and that’s not just the physical floor plan, but it’s access to capital, operational insights, and then what comes after all of that. Build it and grow into it,” he says.

As a craft brewer, obviously the best way to grow is by making and selling great beer. It’s why Hershberg hired Nate Olewine as brewmaster.

“Nate is the most important part of the puzzle,” he says of the brewmaster who won numerous awards and medals while working as head brewer at Devils Backbone Brewing Company in Lexington, Virginia (before the sale to AB-InBev).

“I like upstarts a lot, but it was so important to make sure that the brewhouse was not run by newbies. We needed someone with craft-beer experience.”

It also helps that Olewine has a commanding knowledge of lager making. In an area of the country where the flagship beer made by D.G. Yuengling & Son (Pottsville, Pennsylvania) is ordered at the bar by simply saying “lager,” it’s a style of beer that is ingrained on beer customers of all stripes. Making sure that would be the main offering from Workhorse is going to be important to their success, Hershberg says.

Of course, the brewery is also making IPAs (of all kinds), sours, and hybrids such as Rosé Ale.

Walking into the 5,000-square-foot space that houses the consumer-facing side of the business is impressive in its own way. The brewery has carved out nooks to add intimacy (and to host private parties from the intimate to a blowout) and even dolled up a shipping container to look like a living room, which adds a bit of homeyness to what would otherwise be an imposing space.

The focal point is the large rectangular bar in the middle of the room that draws people in. It’s a nice use of the space that acts as a hub rather than a destination against a wall. The brewery bills itself as a place for workplace gatherings, fantasy-football draft parties, pre-wedding parties (naturally), and other social occasions that many breweries can’t accommodate. 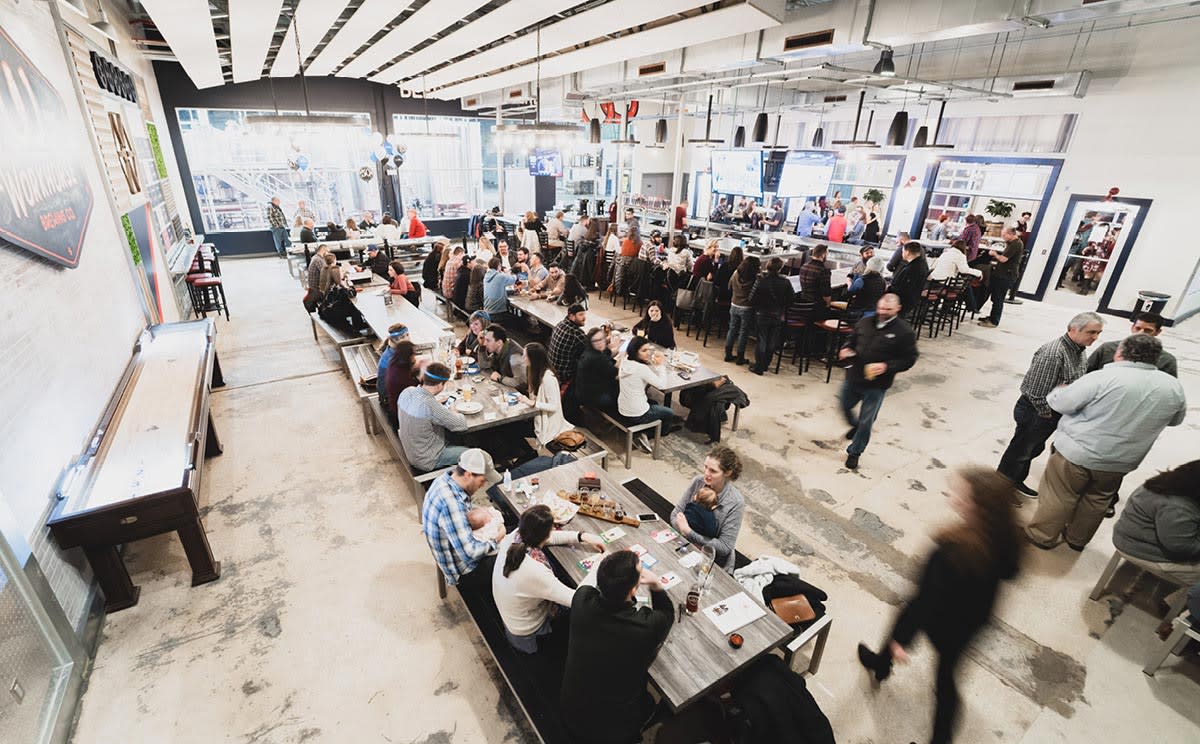 Planning for the Future

The space in the back, however—the roughly 50,000 square feet of brewing area, of which only about 10,000 is currently being used—is where the future lies. Currently it houses a 30bbl custom-made, mostly automated, ROLEC brewhouse, six 60bbl fermentors, and one 60bbl bright tank, all built from Olewine’s specifications to handle both lagers and ales efficiently. The year-old brewery is on track to produce about 2,000 barrels of beer by the end of this year. There is full capacity for 60,000 barrels. 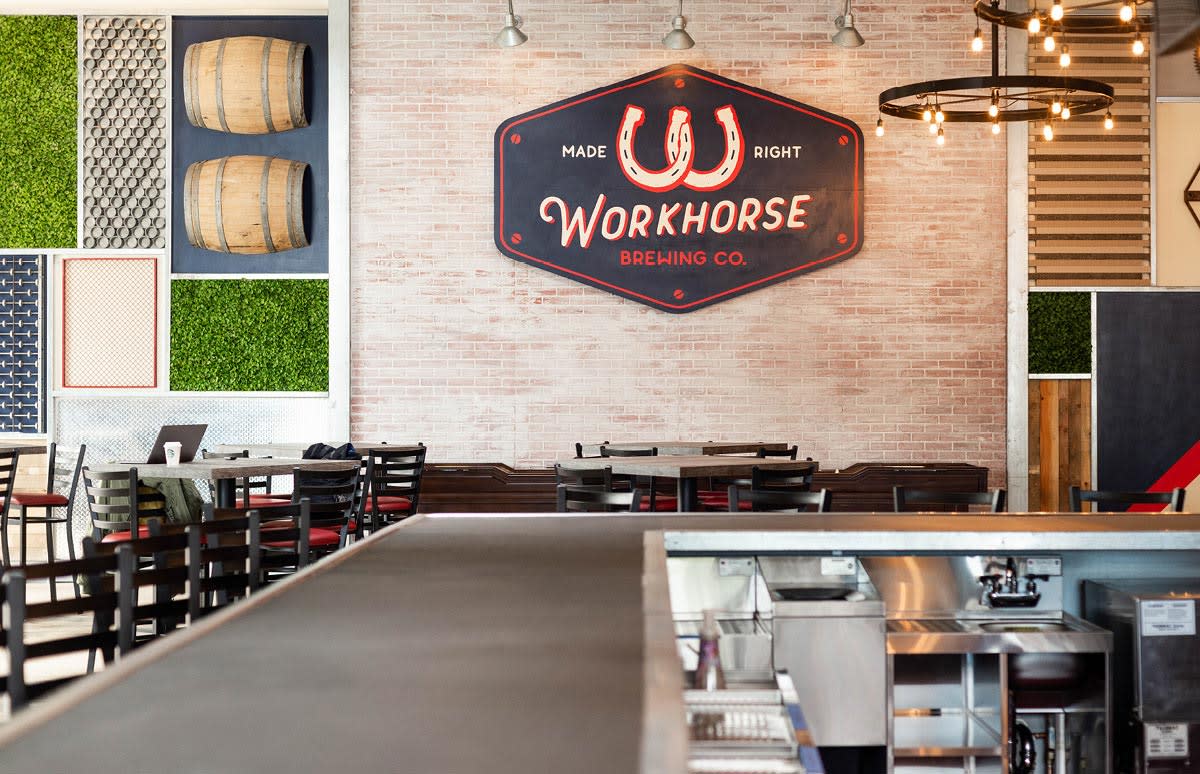 With a focus on lagers, Workhorse has capacity for 60,000 barrels.

As Workhorse grows, each empty square foot is spoken for. The brewery brought in brewery architect Paul Andrew Sgroi, who has worked on numerous projects, including the relatively new Victory Brewing Company facility in Parkesburg, Pennsylvania.

“There’s now a floor plan for every bit of that space, and doing it now, knowing where every tank and pipe will go, will help us not have to worry about moving what we have now or running into new-construction costs later,” Hershberg. “Because we are going to put in the equipment. Being regional is our goal.”

That’s where hiring veteran beer salesman Mark Weinmann comes in. As the key accounts manager, Weinmann, who worked at multiple breweries, including Great Lakes Brewing Co. (Cleveland, Ohio) and Sly Fox Brewing Company (Pottstown, Pennsylvania), is tasked with filling out beer accounts starting with the brewery as the bull’s-eye and then stocking taps with kegs and shelves with 16-ounce cans in concentric circles outward. 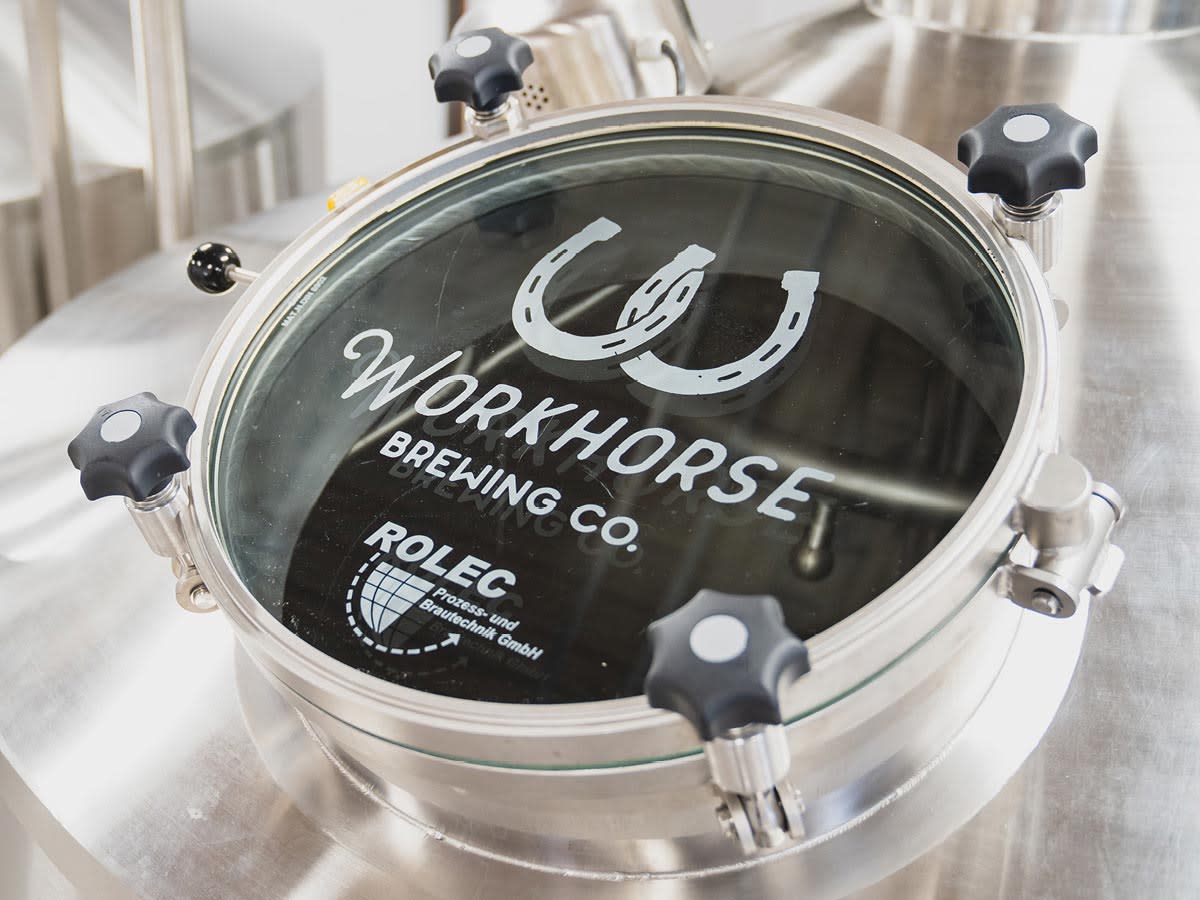 With a focus on lagers, Workhorse has capacity for 60,000 barrels.

And while Hershberg never planned on running a trucking company, for now the brewery is self-distributing, keeping a close eye on all that goes out the door and making sure it stays cold and fresh. He knows the day will come when they will likely sign with a larger distributor, especially as they get bigger, but having this experience of bootstrapping it now will give them better perspective later, he says.

“We didn’t bring in a team of this pedigree to be small,” Hershberg says. “We wanted to make smart choices, but we’re not here to hit singles and doubles. We want home runs.”

Right now, they are already out of the park. Later this year, they will open a taproom in Center City Philadelphia as part of a restaurant concept spearheaded by one of the brewery’s backers.

Throughout it all, Hershberg sounds like the kind of guy who is focused on being successful, but he is also genuinely enjoying the ride and is coming at craft beer with the gusto of the new convert for whom craft is an exciting and engaging atmosphere.

“The happiest moments I have are when I see people in the taproom enjoying themselves, the beer, the space,” he says. “People come in, and want beer. We want to encourage that experience and engage with that. That’s how we connect and grow.”

Q & A: Other Half Brewing Co. Cofounder and Brewer Sam Richardson

Other Half Brewing, long the sought-after IPA and stout maker in Brooklyn, New York, is expanding operations, but that doesn’t necessarily mean it is getting bigger.