In Packs and Off-Premise, Revolution is Thriving

Left: The brewery launched their flagship Anti-Hero IPA in 12-packs in May. Right: sales of larger format packaging, like these 15-packs of Everyday Hero session IPA, have risen dramatically since March.

Under normal circumstances, Revolution Brewing has its hands in a few different pots. Its revenue streams include taproom and brewpub sales; distributor-facilitated draft and packaged sales in nine states; and fees for use of its facilities as wedding venues roughly 100 times per year. Together, these facets propelled Revolution to Number 40 on the Brewers Association’s 2020 list of largest American craft breweries by sales volume.

Then came COVID-19. Wedding parties canceled; the taproom closed; draft sales dried up. Kegged beer typically represents 40 percent of Revolution’s total production, but the brewery didn’t keg a drop of beer for three months after the pandemic hit. Even as some states re-opened bars and restaurants in late summer, draft sales were still down to about half of what the brewery would expect from mid-June to mid-July. Off-premise wholesale has always been one of Revolution’s strengths, but it became a life preserver as draft sales plummeted.

“That’s our most powerful tool right now,” says Doug Veliky, Revolution’s chief financial officer. “Things are looking great when it comes to off-premise, so we’re trying to put any extra eggs in that basket that we can.”

The brewery was well positioned to respond to recent changes in consumers’ beer shopping—it already offered packages the COVID-era shopper wanted, such as multipacks and variety packs, and was able to shift both beer and labor toward producing more of those. With no clear timeline for on-premise to fully recover, Revolution’s strong retailer and distributor relationships, streamlined SKUs, and relentless focus on packaged sales across its home turf should continue to bolster its bottom line in the second half of the year.

Before the pandemic, Revolution already offered two 12-packs (Fist City pale ale and the League of Heroes variety pack of four IPAs) and two 15-packs (Cross of Gold golden ale and Every Day-Hero session IPA). Those larger packs accounted for 23 percent of sales volume—but they have risen to 34 percent in the months since March. The League of Heroes IPA multipack especially “went berserk,” according to Veliky, with sales increasing 64 percent during a four-month stretch from March to July. And large packs’ momentum has held on.

“Getting into late April, we realized this isn’t just pantry-loading,” Veliky says. “This is people consuming more at home and really skewing toward these larger packages and being more efficient with their shopping trips.” 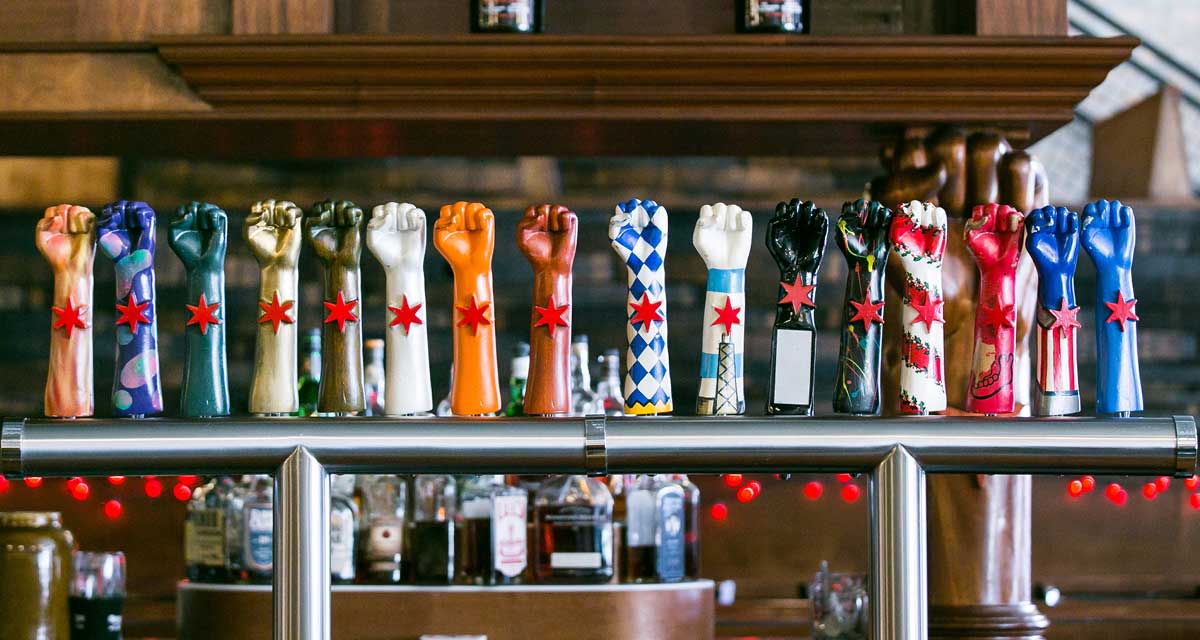 Tap handles at the Revolution brewpub.

That’s unlikely to end anytime soon. Revolution saw the data and quickly accelerated plans for an Anti-Hero 12-pack, which launched in late May to great success, selling 8,000 cases in its first month. It was something of a no-brainer: That flagship IPA already accounted for about 50 percent of Revolution’s production, and now drinkers were looking for their favorite beers in larger packages. Veliky says that sales of 12- and 15-packs alone salvaged a quarter of the brewery’s draft losses. They helped keep a handful of employees on payroll, too, as Revolution shifted them from brewpub staff to the packaging line.

While sales of larger-format packs accelerated by double digits for many craft brewers this spring, these packages have advantages that will outlast the pandemic. Shoppers find them in the places they’re already shopping—grocery stores and big-box retailers such as Costco—and feel they’re getting a better deal per can than they would in a six-pack. Plus, those packages have what the Brewers Association’s chief economist Bart Watson has referred to as “the billboard effect”: their paperboard case allows for a more prominent visual display than a six-pack of cans.

Strong sales for Anti-Hero 12-packs and other large-format packages have proven critical—they’re what’s keeping Revolution afloat as draft is down.

“Any decent-sized 5,000- or 10,000-barrel brewery should be kicking [the idea of 12-packs] around,” Veliky says. “I would recommend figuring out a multipack or core pack of IPAs. The volume you get is worth it.” 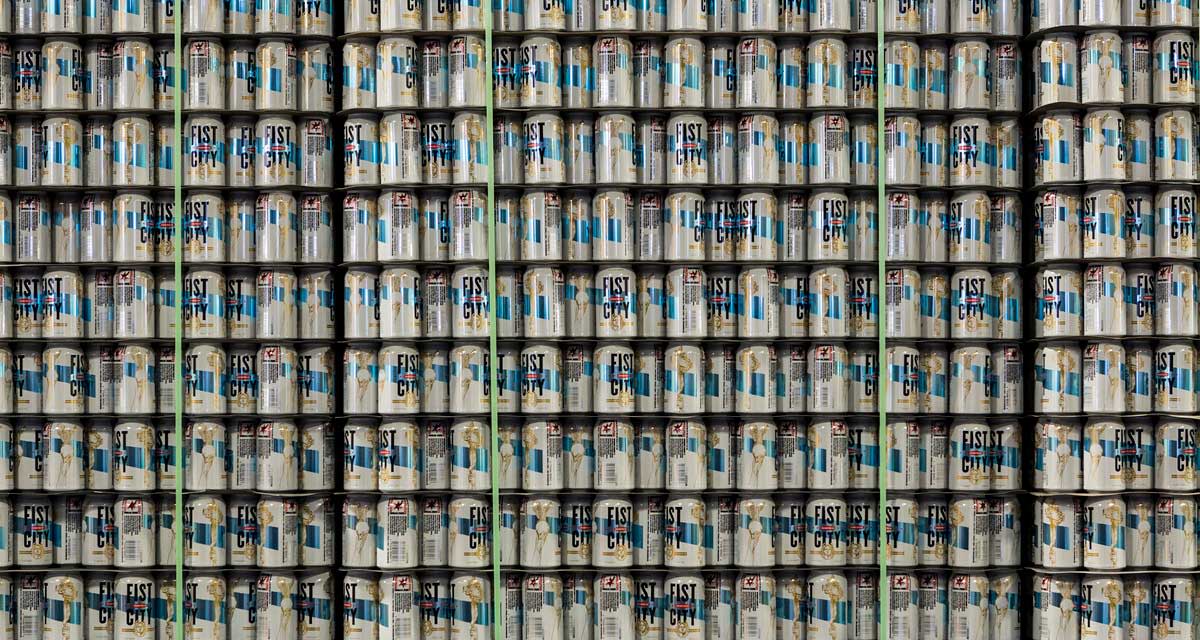 The Spice of Life

Veliky is quick to acknowledge that large-format packs—especially variety packs of multiple beers—are not without challenges. They can be tricky to price, require large can inventories, and take more time and labor to package.

Revolution had resisted putting Anti-Hero into 12-packs because it had raised distributor pricing on the Anti-Hero six-pack just a year earlier, which increased those from $9.99 to $10.99 on the shelf. Veliky knew the brewery couldn’t price the 12-pack at what would seem a logical price: $20.99 or $21.99.

“These chains don’t want anything that can’t be $19.99 or less because it doesn’t sell in those big-box stores,” he says.

On the production side, a 300-barrel run that creates the beers in the League of Heroes IPA multipack takes two days and four extra staff members to package; packaging that quantity of beer into half-barrel kegs takes six hours. Still, the success of League of Heroes—it’s the second best-selling SKU in the brewery’s portfolio—makes the extra labor and packaging time pay off.

Veliky attributes a lot of that package’s success to its unique design: Each “issue” of the box contains three cans of four IPA brands, with at least one new “Hero” making its debut, so that drinkers find something new in each rotation. A new issue hits shelves roughly every three months. The brewery has now issued more than 10 League of Heroes packs with unique comic book–style artwork displaying each IPA as its own superhero. Veliky says the storytelling aspect of the package has helped its popularity—he’s adamant that it sells much better than it would if the package was called something generic like The Revolution IPA Variety Pack. 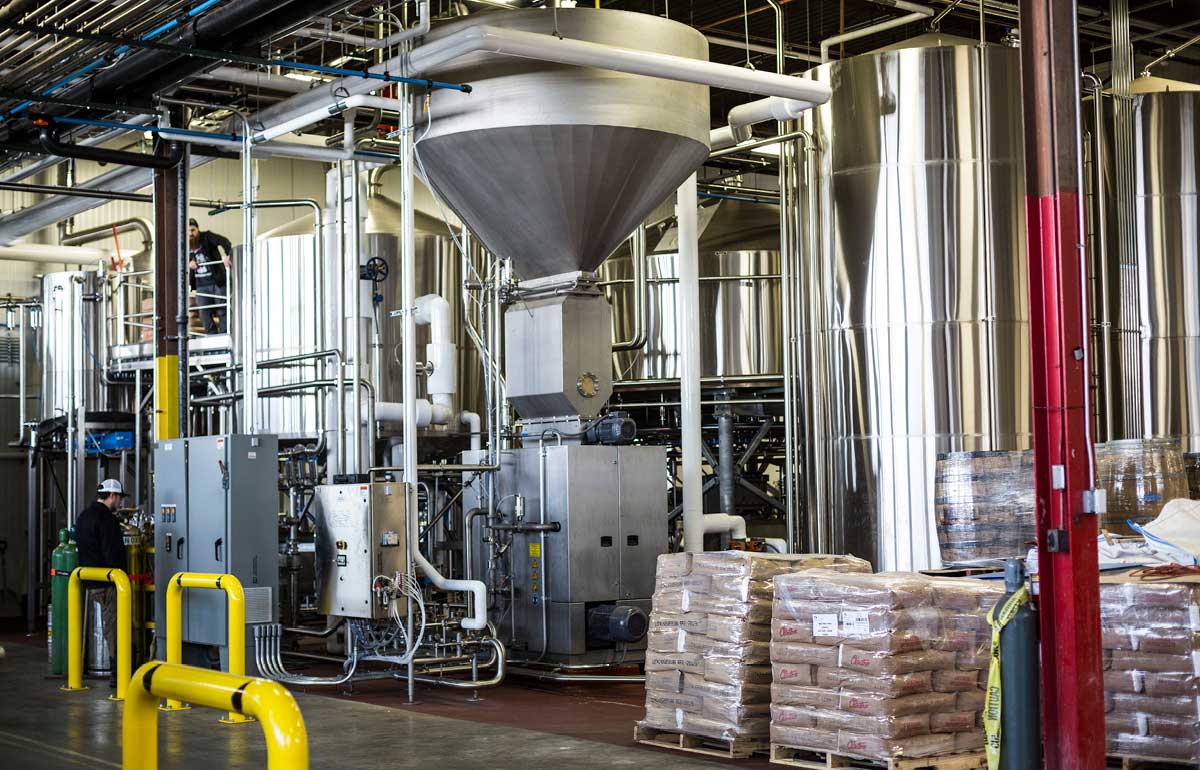 “The marketing can seem lazy when you’re just throwing four beers that don’t look like each other into a box and half the carton is just the picture of those four cans,” he says. “It doesn’t capture the imagination.”

Veliky teases the idea of another new variety pack from Revolution, potentially one that speaks to a drinker who usually buys hard seltzer. The brewery, via taproom curbside orders, has tested mixed four-packs of its 4.5% ABV kettle-soured, fruit-flavored “Freedom” beers this summer. If the idea could get retailer buy-in, he speculates, a “Freedom Series” pack could be forthcoming.

Help Them Help You

One reason Revolution has been so successful with multipacks is its strong relationships with distributors and chain accounts, including grocery stores and pharmacies. Before launching Anti-Hero 12-packs, the brewery called its three largest retail partners—Jewel-Osco grocery stores, Mariano’s grocery stores, and Binny’s liquor stores—to gauge their response to the new offering. Their enthusiasm, Veliky says, made the launch a success. 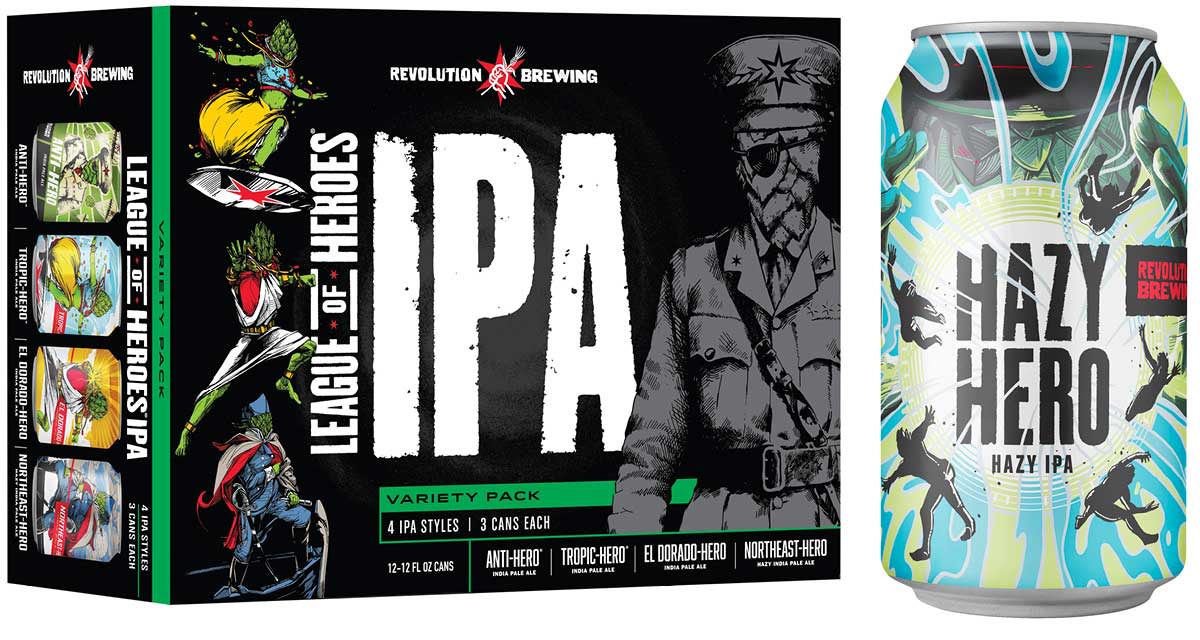 League of Heroes multi-pack sales increased 64 percent. In late 2019, the brewery launched Hazy Hero IPA after retiring a mixed IPA 6-pack, and it sells nearly as well as their flagship Anti-Hero IPA in some markets.

These relationships with chains are part of why Revolution does 90 percent of its business within 90 miles of the brewery. Its success in farther-flung states such as New Jersey, for example, is more limited. (If Revolution wasn’t sold in Duane Reade pharmacies in New York City, Veliky says, the brewery wouldn’t distribute to the state at all.)

“Everything in the Midwest is much more chain-driven, which is what we’ve gotten very good at,” Veliky says. “It caters to our strengths much more than those [satellite] markets do, to say nothing of the distance.”

Veliky can’t point to a secret sauce that’s made Revolution’s relationships with wholesalers so symbiotic—“It’s just who we’ve hired,” he says—but it’s clear that the brewery makes decisions with retail and wholesale partners in mind.

For example, in September 2019, the brewery retired its rotating Hero IPA six-pack. It felt slightly redundant with the League of Heroes variety pack, and all that rotation was too confusing for retailers and wholesalers. Instead, the brewery debuted Hazy-Hero, a hazy IPA in six-packs, that same month, slotting it into the same UPC and shelf space that the rotating Hero sixer had occupied. It’s now a big hit for the brewery, nearly catching flagship Anti-Hero in sales in some of the brewery’s smaller markets, such as Ohio.

Likewise, when Revolution debuted 19.2-ounce single-serve cans of Hazy-Hero in January 2020, the brewery priced them identically to the other 19.2-ounce Heroes, at $2.99. At 7.3 percent ABV, Hazy-Hero requires more ingredients to produce than the 4.3 percent Every Day-Hero, but Revolution wanted to keep the same price point to make the new SKU easier for retailers and wholesalers. It worked; Hazy-Hero now boasts 4,200 distribution points. 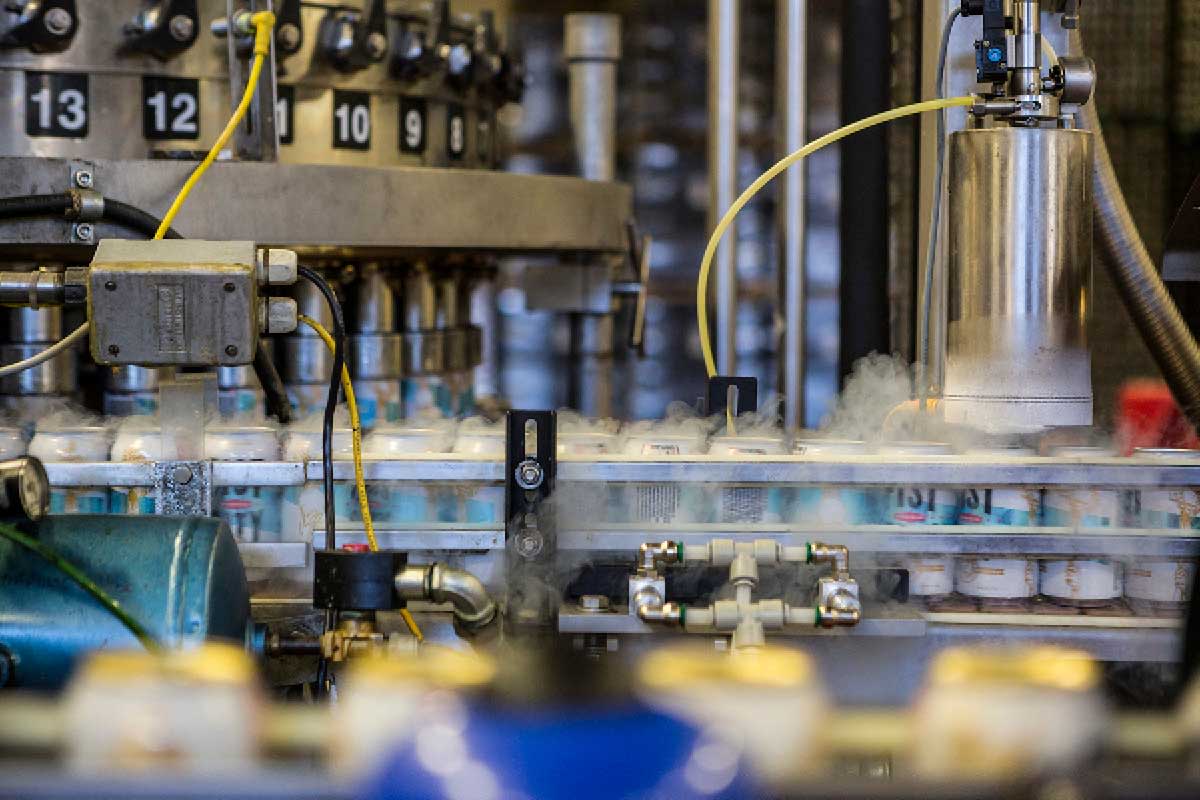 Cans of Fist City run through the rotary filler.

While Revolution’s sales volumes largely come from what could be considered less-crafty avenues—multipacks at grocery stores, pharmacies, and chain liquor stores—it’s a unique brand that’s managed to also retain beer-geek credentials. Drinkers can buy its beer at Walgreens, yet hundreds of fans line up at the brewery for releases of the Deep Woods barrel-aged beer series.

“It’s a small list of breweries that are big-chain players but notable in the specialty world,” Veliky says. “That makes communicating our brand challenging. It’s just a matter of never forgetting both sides.”

Veliky credits the brewery’s social-media and communications team with conveying a brand voice that’s speaks to both new customers and the nerdiest beer drinkers. It’s not a matter of ping-ponging between the two tones, he says, but of constantly drawing people into a brewery culture that meets people wherever they are in their beer journey.

“We purposefully don’t specify what the ‘revolution’ is,” he says. “We want it to be able to encompass not just the revolution for better-tasting beer, but [also] revolutionizing what role a brewery can play in a city, what they can do beyond just beer to rally people.”

The crunch on aluminum cans comes just when COVID-19 fears have made breweries more dependent than ever on packaged-beer sales. Relief is unlikely to arrive soon.